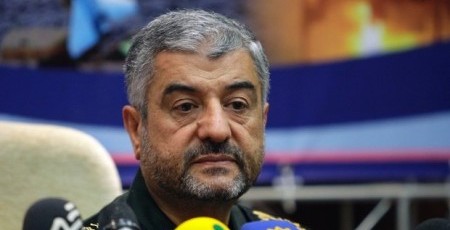 On Wednesday, we reported on comments by Islamic Revolutionary Guards Corps commander Mohammad Ali Jafari chiding an “incorrect” statement by Foreign Minister Mohammad Javad Zarif, “We consider him a seasoned and experienced diplomat, but he has no experience in military affairs and this is why he has made this remark.”

But it appears that Jafari is not just upset by Zarif’s reported caution, in an interview in Time magazine, that the entire Iranian defense system could be taken out by two US bombs.

The commander has issued a challenge to the Rouhani Government in his speech on Tuesday at Imam Sadegh University:

The military, systems and procedures governing the administrative system of the country are the same as before, [but it] has been slightly modified and unfortunately infected by Western doctrine, and a fundamental change must occur.

Before and just after Hassan Rouhani’s inauguration in August, the Guards issued a series of statement trying to curb the President’s authority, including the effort to reach a nuclear deal with the West; however, these ebbed after Rouhani responded — apparently with the Supreme Leader’s backing — by saying that the Guards should not be involved in politics. At the same time, the President sought to defuse tensions by assuring the Guards that their significant role in Iran’s economy would not be restricted.

Jafari and other commanders had offered support for Rouhani’s moves towards the interim nuclear deal of November 24, provided the Government did not give up fundamental positions such as Iran’s right to enrich uranium.

However, on Tuesday, Jafari appeared to challenge the President’s injunction to stay out of politics: “The most important area of threat to Iran, in which the IRGC has the responsibility to preserve the achievements of the Revolution, is the political field. The IRGC cannot sit quietly against that.”

Those who consider the political movements of the IRGC against their own work create an atmosphere in which the IRGC is military and must not enter politics and flaunt the words of Imam [the late Ayatollah Khomeini] to us. Of course we do not have much work with them and act on our own tasks

Foreign Minister Mohammad Javad Zarif has led a series of Iranian officials warning against an escalation of US pressure, including armed force and new sanctions:

Military threats, including having the option on the table, are not beneficial and are illegal. What does America think it will benefit from by using the military option?

The people of Iran respond with resistance against this type of threat, and this resistance has today been successful.

Some American officials speak excessively about nuclear issues. We made an agreement in Geneva. If they dare undercut the agreement in order to see what we do, finally they will have something to say and take responsibilities.

The Secretary of the Expediency Council, Mohsen Rezaei, joined in: “We say that the old sanctions must be removed as quickly as possible….Any type of sanctions are a violation of the negotiations and are a sign of a new conflict with Iran.”

Oil Minister Bijan Zanganeh, anticipating the easing of sanctions, has said that he “presented a proposal to OPEC that would allow Iran to increase its oil exports, which received positive feedback”.

Speaking at a Tehran university on Tuesday, the commander of the Islamic Revolutionary Guards Corps, Mohammad Ali Jafari, has reaffirmed the Guards’ presence in the Syrian conflict:

We are undertaking anything that we can and that is necessary for Syria’s protection because Syria is at the front line of the Resistance….

We have announced before that we have specialized forces in Syria to transfer experience and training who undertake advisory roles, and this is obvious. Obviously, an official system has been requested from us….

Look at what investments the Arrogant System is putting into Syria to confront the front line of the Islamic System. It is dispatching wicked forces to [Syria] and supporting them in order to damage the ruling regime, which is an ally of Iran, but they have of course not succeeded.

They themselves have announced that the only reason for their failure there is Iran’s protection of Syria. This suggests that the state of Syria is good and improving. We hope that complete security returns to Syria as soon as possible and there is no place for worry.

The Sunni insurgency Jaish ul-Adl claimed another attack on Wednesday in its campaign against Iranian security forces in southeastern Iran, saying it struck a camp in Saravan in Sistan and Baluchestan Province.

The insurgents said the attack was retaliation for shelling of the Mashkel area of Eastern Balochistan last week.

Meanwhile, the Deputy Head of Iran’s Border Guards lashed out at Pakistan over the attacks:

Our most important problem is the Pakistani government which doesn’t inspect its borders.

Of course, we have protested many times that our border guards are shot from Pakistan’s territory, but that country has not yet adopted any action to enhance security at its border.