Syria 1st-Hand: Stories With the Children “Is It Nice or Is It Not?” 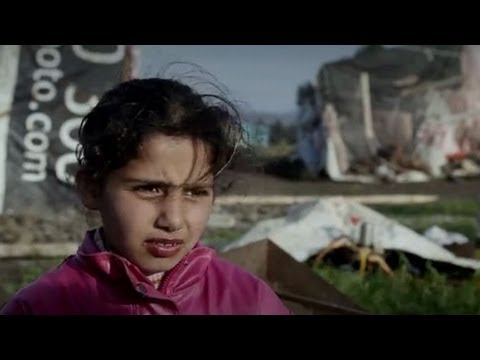 On Sunday I sat down in Hatay airport feeling tired. The weather conditions were abysmal and I wasn’t looking forward to the next forty eight hours of travel before I got home. Then I rummaged through my satchel and found a folded piece of paper. A little girl called Rime had given it to me two days earlier, and I had put it in my pocket without reading it. I figured I had the time now, so I took it out and unfolded it carefully.

As I read her neat handwriting, with hearts and little flowers drawn upon it, I felt myself choking up and my face lit up with a bright smile. It was a story about a bee and a sheep and a turtle and how they all decide to go together for a picnic and play beneath a tree in a magical castle and when they were all done they got back home and went to sleep.

This last week I was volunteering with the Karam Foundation to help cheer up Syrian children at the Salam school in Reyhanli. I was running a journal writing workshop and also helping out with a storytelling workshop, and one of the things that I was constantly telling the children was that stories needed a “secret” password before being told, otherwise they wouldn’t be nice, like tea that had gone cold. The children would remind me when I pretended to forget, and they would chant out the words “Kan ya Ma Kan Fi Qadeem al Zaman” – “It was or it was not, in a time long ago” before each recital. At the end of every story we would end with the cutesy “Hilweh wala fat fouteh?” (Is it nice or is it not?) phrase.

I must have told a thousand stories before the week was through, and the children were mesmerized by each one. It was as if something magical happened when a story was being told, and we were all engaged in something old and familiar. I told stories of a magical giant who helped a little girl find her way back home, of a hunter who rescued a boy lost in the woods, and of how the boy helped his father reclaim his land from a thief. There were stories of turtles travelling to the pyramids and of a little beetle that helped people to finally drink from a magical fountain of happiness that was protected by a mean caretaker.

In the diary writing workshops, I asked the children to write 20 lines about the worst day in their lives, and another 20 about the best day. Anybody who reached 20 lines for the best day of their lives got to pick a special sticker to keep in their notebooks. It was just a sticker, but when they were finally given the opportunity to pick one their eyes would light up in glee and they wouldn’t know which one to pick. They would take what seemed like ages to choose which one they wanted.

I don’t know how it happened, or when exactly, but I fell in love with each of those children and was able to tell their personalities apart even in the short time we had available. One 7-year-old girl drew me a pretty picture with patterns and a large heart. Written in the heart were the words, “Baba”. The cynic in me would have smirked, but after reading what some of these children had written about their lives, or what they had told me over the past days, I almost cried. How could I possibly be a Baba figure to anybody? But for those short days I was.

I remember one boy who looked just like a writer, whatever that may look like. I saw him pick up his pen and stare at the page as I asked him to write about the worst day of his life. He paused as if to think about it, sighed as if he had pulled it up from deep within himself, and then began writing. He then wrote on and on and on. He also wrote over 30 lines for the happiest day of his life, and so did many other boys and girls. They all whistled when they heard me ask for a mammoth 20 lines, but when they started, many of them went far beyond that. In fact I had trouble stopping them writing. Some of them even let me read the entries, on condition that I don’t read it aloud to the other children. It was a privilege for me to have looked into their memories. They were all good kids, beautiful kids.

One girl who wore a red scarf and matching woolly cap was a know-it-all and quickly became my very own teacher’s pet. She fussed and tsk’ed when she saw me write the date on the board. She said “Sir, I can tell you don’t know Arabic. That’s not the way we write the date on the board”. Then she got up and wrote it on the whiteboard in her very best handwriting. I asked her what her name was and she told me. I told her that that was the name of somebody very dear to me, to which she straightened up in her seat and replied almost instantly with an answer that was the very best that Syrian polite society had to offer. It was all I could do not to burst out in laughter in front of the class. The next day I saw her running around madly with paint on her cheeks and fingers as she helped the artists in our groups paint the new mural on the school wall, full of life and mischief.

There were countless children throughout the week. There was the young boy Hassan who wanted me to play with his new ball in the playground on our last day, there was young Aisha who let me sit next to her in a class whilst one of my colleagues taught them about photography. She told me all about her family and of how her father was a vet and of how she loves all kinds of animals except cats. She told me she wasn’t afraid when the volunteer dentists pulled out one of her teeth and that she had been brave, and I believe her. In spite of everything they had been through, these children had found a way to remain cheery, alive and curious about life. I do love them all dearly.

But there were also moments of sadness. Like when I met an 11-year-old boy who didn’t know how to read. I have never met someone who can’t read, and I stood there stunned for a moment as my mind raced through ways that I could help him in the one hour I was spending in his class. There were none, so I asked him to draw the best and worst days of his life. He drew pictures of the planes that Assad had sent to bomb his village.

One boy told me how he had locked himself in his room for three days when his cousin was killed as he fought for the Free Syrian Army — I asked him to write about that. Another boy told me his father had been killed, and that that day was the saddest day in his life — he went on to write about that too. One girl spoke of how her brother had been captured by the regime, and of what they had done to him.

Everybody had a story to tell me. And in spite of that they all retained the greatest of warmth and hospitality. They constantly offered me sweets and biscuits after our classes. For one boy, the best day in his life was when his friends came to visit him on the Eid and his mother had cooked his favourite dishes. They had then had tea and he was given 100 liras to go and buy chocolates and biscuits from his uncle’s corner shop. I told him to write that down too and he got one of the stickers for his efforts.

So much more was seen and done in this week, of which I will be writing, but as I sat there in that busy airport with the world walking by, I thought of a pretty little girl with a pink woolly cap who had gone home after my storytelling workshop to write me a story in her best handwriting, albeit with spelling and grammar mistakes. She even remembered the magic words and when I reached the end of the story she asked me “Hilwe wala fatfouteh?”. I paused for a moment and mouthed my reply back to her silently.