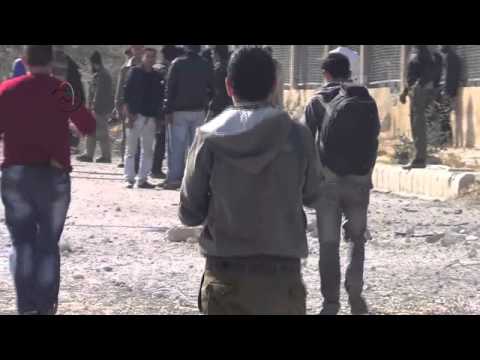 The Local Council of the besieged town of Moadamiyyat Ash Sham, near Damascus, has called on the opposition Syrian National Coalition, the United Nations, and the countries in the Friends of Syria group to ensure the safety of civilians leaving the city on Tuesday.

The Council said an evacuation is being arranged through the Syrian Red Crescent, Red Cross, and a nun, Mother Fadia Lahaam.

The Syrian Red Crescent later said that it had evacuated 2,000 civilians from Moadamiyyat Ash Sham:

Around 2000 people exited #Mouadamia today, 750 women & children were received by us offered help & transferred to shelters near #Damascus

The evacuation of more than 1,000 civilians on October 12, to escape malnutrition and starvation from an 11-month siege, is still shrouded in controversy. The Council claims that regime opened fire on the evacuees, who included women and children, killing three and injuring dozens.

The Council also asserted that several children and several women were detained and abused by Syrian forces.

The Council said that it is “painfully aware of the risks” of the evacuation but has been forced to agree to it “as a result of the entire world’s desertion in the face of the city’s starving children and unfathomably awful humanitarian situation”.

The Council claims at least 11 people have already starved to death: “The residents are now faced with three choices: starve to death, be bombarded to bits by daily regime shelling or hand themselves to a regime which has yet to keep a single promise it has made since the start of the uprising over two years ago.”

Local Groups Reconstruct Tafas After Its Fall To Insurgency

Citizen journalists and activists on Tuesday report that regime forces are shelling the al-Wa’er neighborhood in the northwest of Homs city, with airstrikes, mortar and rocket bombardments amid ground offensives including by Hezbollah fighters.

The Shaam News Network reports that two children and a woman have been killed and several more civilians have been injured in the attacks so far on Tuesday.

Al-Wa’er is located near the ring-road in the north-west of the city. The neighborhood is extremely overcrowded with around 500,000 civilians, including many who fled regime bombardment of other parts of the city particularly Old Homs.

Footage of the shelling on Tuesday:

Activists report that civilians are being refused permission to leave al-Wa’er on Tuesday, and that both al-Wa’er and Homs Old City are effectively cordoned off and under total siege.

Homs: Only city to ever have 2 extreme & deadly sieges? Waer & Old City now totally cordoned off & both subjected to heavy shelling #Syria

After insurgents from a coalition of Free Syrian Army and moderate Islamist groups took control of the Dar’aa town of Tafas at the weekend, following months of fierce fighting and heavy losses on both sides, the regime has stepped up its offensive against Dar’aa city and against other towns on its periphery and along the Syria-Jordan border region.

The regime is also striking at-Taebah on the Syria-Jordan border.

The Local Coordination Committees claim 47 people were killed on Monday, including 14 in Damascus and its suburbs and 10 in Aleppo Province.

The Violations Documentation Center records that 76,968 people have been killed since the start of the conflict in March 2011, an increase of 61 since Monday. Of the dead, 57,216 are civilians, a rise of 44 from yesterday.