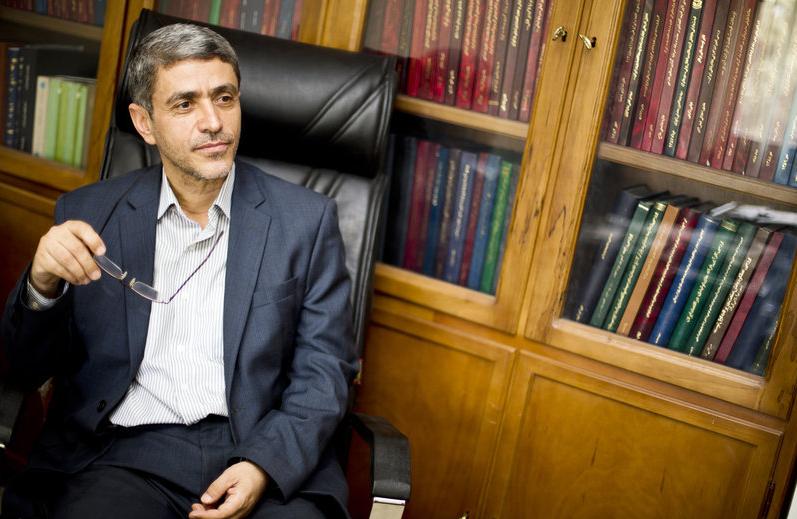 SUMMARY: Economy Minister Ali Tayyebnia has issued a warning over thoughts that an agreement on Iran’s nuclear program with the US and other countries will lead to immediate economic recovery:

To think that sanctions will be lifted in the near future and all problems will be solved is a false dream. Even if there is progress in the negotiations and oil revenues begin pouring into the country, we will still be facing the problems of dependence on these revenues.

Tayyebnia emphasized that sanctions are not the cause of the Islamic Republic’s economic problems, only an aggravating factor of “inappropriate economic policies and ineffective economic models”.

He continued, “It is a strategic mistake to concentrate all our energy on reducing sanctions and lose focus from the factors creating our economic problems.”

The Rouhani Government is battling a series of problems that it has inherited from the Ahmadinejad Administration, including a large deficit in the Government deficit, rising inflation, declining production in some sectors, tension over foreign reserves, and the haphazard implementation of the subsidy cuts program.

British Foreign Secretary William Hague has said that the UK will restore limited diplomatic relations with Iran by appointing a charge d’affaires to Tehran.

He added it was hoped this would help “on the way towards eventual re-opening of both our embassies”.

The UK shut its embassy in Tehran in November 2011 after it was attacked by protesters.

The Vice-President of the Russian Joint-Stock Company NIAEP, which is in charge of developing Iran’s Bushehr nuclear reactor, said Tuesday that the reactor will be ready for acceptance and commercial operation in 2015.

Gennady Tepkian said that Bushehr had reached criticality on May 8, 2011 and the first power unit reached full capacity in late August 2012.

President Rouhani has appointed Shahindokht Mowlaverdi as Vice President and Head of Center for Women and Family Affairs.

Rouhani has been criticised recently for not including more women in his administration, which was one of his key promises during June’s presidential election.

Mowlaverdi is the third woman appointed as vice president by the Rouhani administration after Elham Aminzadeh and Masoumeh Ebtekar were chosen in August and September respectively.

Vice-Chairman of the Iranian Parliament’s National Security and Foreign Policy Commission Mansour Haqiqatpour has claimed that Foreign Minister Mohammad Jarad Zarif called the telephone conversation on 27 September between President Rouhani and US President Obama a mistake.

“Mr. Zarif did not say that what they did was inappropriate, but admitted that, given the remark by Leader [of the Islamic Revolution Ayatollah Seyyed Ali Khamenei], answering Obama’s phone call and the prolongation of the meeting with [US Secretary of State John] Kerry have been wrong,” said Haqiqatpour.

Foreign Ministry Spokeswoman Marzieh Afkham rejected the claims as “completely in contradiction” with Zarif’s remarks at the meeting.

Haqiqatpour’s comments follow remarks made by Supreme Leader Khamenei at the weekend, suggesting that “Some of the things that happened during the New York trip were not appropriate, because we believe the US government is untrustworthy, arrogant and irrational, and one that reneges on its promises.”

The Meet Iran YouTube channel — which appears to be related to the @HassanRouhani Twitter account — has published this English-subtitled video of an interview by Foreign Minister Mohammad Javad Zarif with State TV. Zarif praises the Iranian ex-patriates he met in the U.S., saying that many were successful.

“It was joyful to see for example one youth with a Ph.D from Harvard University and who is now teaching,” Zarif commented.

75% of Iran’s Economic Issues Internal, Not Due To “International Issues”

Head of the Chamber of Commerce Yahya Al-e Eshagh has downplayed the impact of the US-led sanctions on the poor state of Iran’s, declaring that more than 75% of Iran’s economic issues are internal and only 15-25% are related to “international issues.”

He warned that lifting the sanctions will not immediately solve Iran’s economy, stating “If we expect that Iran’s economy will be freed from all issues by resolving international relations, then it is a useless expectation.”

US Opens Door to Iran Taking Part in Syria Conference

The United States has suggested that it might be willing to endorse Iran taking part in a long-delayed peace conference on Syria — if Tehran publicly backs a 2012 statement that called for a transitional government in Damascus.

The June 30, 2012, “Geneva Communique”, which sought to chart a path to a diplomatic resolution of the conflict, was agreed to by major powers including the US and Russia, as well as some Gulf states, Iraq and Turkey. Iran, not invited to the talks, did not agree to the statement.

On Monday, State Department spokeswoman Marie Harf suggested that the United States might be better disposed to Iran’s taking part in a Geneva II conference if Tehran were to embrace the original Geneva Communique.

“We’ve been clear, multiple times, about Iran’s destructive role in the Syrian crisis and our expectation that any party that (is) included in Geneva II must accept and publicly support the Geneva communique,” she said.

“If, and this is an if, Iran were to endorse and embrace the Geneva communiqué publicly, we would view the possibility of their participation more openly,” Harf said, later adding the United States would then view its taking part more “favorably.”

He added that the trend of “freeing political and security prisoners will continue.”

Mousavi and Karroubi have been under house arrest since February 2011.

Principlist MP: Rouhani “In Line With the System”

He stated that Rouhani’s comments were “in line with the system,” adding, “All must obey these positions and opinions.”

Regarding relations with the United States, he said, “It is too early at the moment to introduce these questions because [we must wait until] American officials prove their honesty to us.”

Mostafa Faghihi, manager of the pro-Rouhani website Entekhab, was arrested yesterday and is now being held in Evin Prison.

He has been accused of publishing lies for disturbing public opinion.

The Communications Ministry has denied Monday’s reports that Minister Mahmoud Vaezi said Facebook and Twitter will be unblocked indefinitely.

The Ministry said an investigation is still underway.

The Rouhani Government has said that it is committed to opening up communications, with all Ministers starting Facebook pages and both the President and Foreign Minister prominent on social media.

Last month, Twitter and Facebook were unblocked for 24 hours, either because of a “technical glitch” or a testing of the waters by the Government.