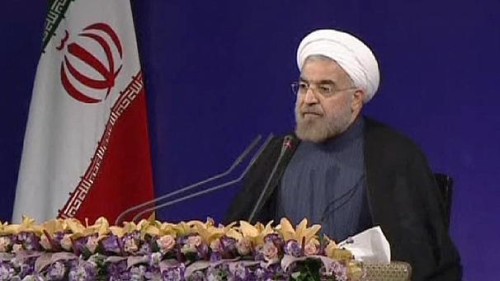 SUMMARY: Speaking after a Cabinet meeting on Wednesday — the first after his return from five days of diplomacy and public relations in New York — President Rouhani pressed his line of engagement and nuclear discussions with the US and other countries, claiming that Iran had established its key starting points.

Rouhani, referring to two of Tehran’s essential conditions, said, “The international environment is such that sanctions must be removed” and that the Foreign Ministers of the 5+1 Powers (US, Britain, Germany, France, Russia, and China) “acknowledged Iran’s nuclear rights”.

Rouhani also said more about his 15-minute phone call with President Obama last Friday — the first direct contact between US and Iranian leaders since 1979 — saying, “Our people have opposed the behavior that America demonstrated in various matters, and the matters that have emerged between the two countries cannot be resolved in a short amount of time”.

Rouhani claimed that Obama replied, “I accept this”, and that the US President acknowledged: “You do not seek nuclear weapons and Iran’s leader has emphasized the taboo of construction and use of nuclear weapons. Given these positions, the road to achieving results in negotiations is open.”

The people must know that the foreign policy matters ahead are not a smooth road. We have a difficult road ahead and cannot resolve problems of eight or ten years in ten days. There are many ups and downs in the world of politics.

Journalist Isa Saharkhiz, imprisoned just after the disputed Presidential election in June 2009, has been freed.

Isa Saharkhiz soon followed, “I have been released. Thanks for the love, everyone.”

Saharkhiz, who was also a Ministry of Culture official in the Khatami Government, was targeted amid the post-election protests in 2009. His house was raided on June 20 and he was detained two weeks later.

Larijani said yesterday, “Rouhani’s speeches and interviews were exact and deep, and touched upon the miseries and hardship that the Iranian nation has gone through as a result of Western adventurism.”

Commenting on Western responses to the Syrian crisis, Larijani said “They might think they will exploit these extremist groups for the time being and take care of them later. They are, however, unaware that once these terrorist groups grow, the West and its allies in the region will not be able to confront them. An example of this is Afghanistan.”

He also suggested that “Nuclear negotiations can no longer be conducted with the past pattern and literature. They should be revived in a new context.”

The Islamic Revolutionary Guards Corps (IRGC) has released a statement regarding the death of one of its officials earlier this week in Karaj, northwest of Tehran.

Mojtaba Ahmadi was found shot dead on Monday, allegedly with a bullet in his heart, according to the website Alborz. London’s Telegraph newspaper claims Ahmadi was commander of Iran’s Cyber War Headquarters.

The IRGC denied reports that Ahmadi’s death was an assassination. Sepah News, the IRGC’s official public relations website, has published an article headlined, “Denial of News Reports About The Assassination Of Sepah Personnel”.

Sepah News quotes the IRGC’s public relations officer in Alborz Province as denying the reports, and saying that the cause of the incident and the assailant remain unknown.

Daughter of Former President Queries Lack of Women in Government

Commenting on Rouhani’s election promise to include more women, she said “The discussion between me and the rest of women is, ‘Why did Mr. Rouhani, who spoke very well of women’s situation in his campaign slogans and introduced the matter, ignore their capabilities during cabinet selection?’”

Fatemeh Hashemi added, “The closeness of our family with Mr. Rouhani does not belong to the present, but began during the revolution. In reality we were neighbors and had close relations with each other. When he stated that he sought to become a presidential candidate, I was present in his first election session and Yasser [son of Ali Akbar Hashemi Rafsanjani] cooperated with Mr. Rouhani from a strategic aspect.”

Head of Judiciary: “Seditionists Must Know Environment in Sedition is Closed”

The head of the judiciary, Sadegh Larijani, has tried to draw a line under both the recent release of political prisoners and the mass protests after the disputed 2009 Presidential election.

Larijani denied that the freeing of detainees was due to June’s election of President Rouhani.

He said the “seditionists were those who pursued a coup d’état against the nation’s vote”, for example, by falsely introducing a runaway girl [Neda Agha Soltan, shot dead as she watched protests on June 20, 2009] as martyred by the system, launching a mourning ceremony for her, and then participating in it”.

Larijani concluded, “Seditionists must know that the environment for sedition is categorically closed.”

Sixteen prominent political prisoners were freed in late September. Officials said the next week that the Supreme Leader had pardoned another 80, but almost no details emerged about those supposedly released.