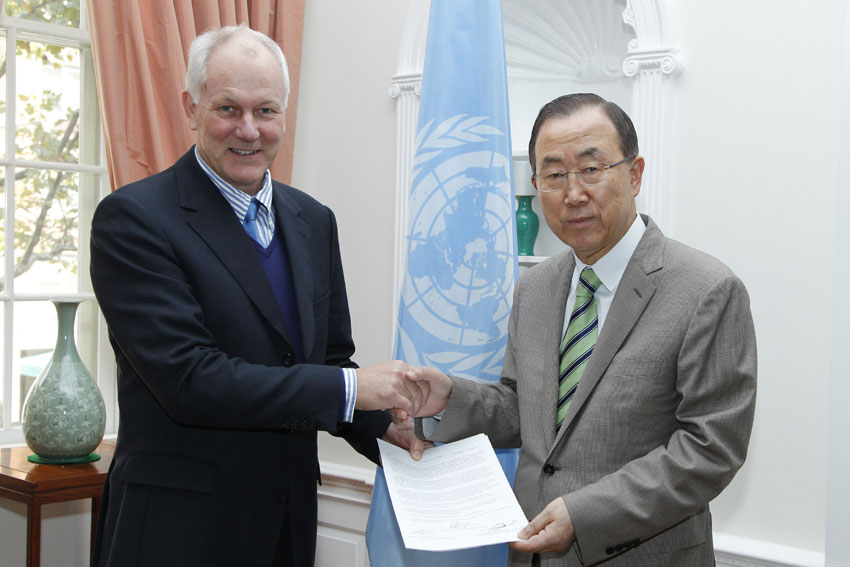 SNAP ANALYSIS: Four points on the United Nations report — and its political impact — on the August 21 chemical weapons attacks near Damascus:

1. The strongest evidence are the detailed medical reports from 36 survivors of the attacks, complemented by 16 interviews with medical staff who treated victims.

The report concludes, “The positive blood and urine samples provide definite evidence of exposure to Sarin by almost all of the survivors.”

2. The munitions evidence is weaker in establishing that rockets described in the report carried chemical weapons on August 21.

The summary of the report is definitive about “several surface-to-surface rockets: “Samples later confirmed to contain Sarin were recovered from a majority of the rockets or rocket fragments.”

However, the body of the report is not as clear. It says there were “five impact sites” but only details 1) a motor from a variant of an M14 artillery rocket, found in Muaddimiyeh Ash Sham in West Ghouta, and 2) parts of two unguided 330-mm artillery rockets, found between Zamalka and Ein Tarma in East Ghouta.

The report says the unguided rockets each had a liquid capacity of 50 to 62 liters.

It is only when one does into the detailed table of laboratory results that the outcome can be established: there is no evidence of chemical weapons in the case of the M14 artillery rocket, presumably because the motor was insufficient to establish this; however, there is evidence of a chemical agent on the 330-mm rockets from East Ghouta.

3. With the United Nations inspectors mandated only to establish if chemical weapons were used and not who used them, there is no ascription of responsibility to the regime or insurgents. The farthest the report can go is to calculate the locations from which the three rockets may have been fired.

4. Despite the limitations on the findings over munitions and ascription of responsibility, the United Nations has already signalled its intention: there is unlikely to be any punishment over the August 21 attacks, but the Syrian regime will now be expected to comply fully with the demand that it hand over its chemical weapons stocks.

Which leaves the question, given a different view from Russia: can the UN — or others — enforce that demand?

The United Nations Secretary General, Ban Ki Moon, said in a statement Monday that a UN inspectors’ report into the August 21 attacks near Damascus “has concluded that chemical weapons were used on a relatively large scale in the Ghouta area of Damascus in the context of the ongoing conflict in Syria.”

Ban added, “On the basis of its analysis, the Mission concluded that it – and I quote – “collected clear and convincing evidence that surface-to-surface rockets containing the nerve agent sarin were used in the Ein Tarma, Moadamiyah and Zalmalka in the Ghouta area of Damascus.””

The UN Secretary General said that because of the security situation and other limitations, “the Mission was unable to document the full extent of the use of chemical weapons on 21 August or to verify the total number of causalities.”

“The results are overwhelming and indisputable. The facts speak for themselves,” Ban said, adding that, “The United Nations Mission has now confirmed, unequivocally and objectively, that chemical weapons have been used in Syria….This is a war crime and a grave violation of the 1925 Protocol and other rules of customary international law. I trust all can join me in condemning this despicable crime. The international community has a responsibility to hold the perpetrators accountable and to ensure that chemical weapons never re-emerge as an instrument of warfare.”

Ban said that the UN inspectors interviewed over 50 survivors, medical personnel and first responders, and “applied a rigorous and objective selection process designed to identify survivors who may have been exposed to chemical agents. It assessed these individuals’ symptoms and collected biomedical samples, including from hair, urine and blood.”

Also interviewed were nine nurses and seven treating physicians, several of whom responded immediately to the incident and who reported seeing “a large number of people lying in the streets without external signs of injury, some with labored breathing, most of them unconscious.”

The Mission also “documented and sampled impact sites and munitions, and collected 30 soil and environmental samples.”

The following are extracts from Ban’s statement and from the UN inspectors’ report.

THE DAY OF THE ATTACK

The weather conditions that morning were conducive to maximizing the potential impact of an attack involving heavy gases, which can stay close to the ground. Weather information showed a falling temperature between 2:00 a.m. and 5:00 a.m. The downward movement of air would have allowed the gas to easily penetrate the basements and lower levels of buildings and other structures where many people were seeking shelter.

Survivors reported that following an attack with shelling, they quickly experienced a range of symptoms, including shortness of breath, disorientation, eye irritation, runny nose, blurred vision, nausea, vomiting and general weakness. Many eventually lost consciousness. First responders described seeing a large number of individuals lying on the ground, many of them dead or unconscious.

The samples were sent for analysis to four laboratories designated by the OPCW. The Mission’s factual findings are as follows.

These results were corroborated by the clinical assessments, which documented symptoms and signs consistent with nerve agent exposure. A number of affected patients were diagnosed with intoxification by an organophosphorous compound, and clearly showed symptoms associated with sarin, including loss of consciousness, shortness of breath, blurred vision, eye inflammation, vomiting and seizures.


A majority of the environmental samples confirmed the use of sarin. The samples were taken from impact sites and surrounding areas – locations where survivors were also found to have been affected by sarin.

MUNITIONS USED IN THE ATTACKS

The team was also able to examine impacted and exploded surface-to-surface rockets that are capable of carrying a chemical payload. These were carefully measured, photographed and sampled. A majority of the rockets or rocket fragments recovered were found to be carrying sarin.

One of the munitions found on the alleged chemical weapons impact sites in Moadamiyah had “black numbers on the outside, 97-179; and engravings on the bottom ring of the engine, г и ш 4 25 6 7 179к”.

The inspectors admitted that there were issues in examining the munitions including the very limited time given to conduct a survey of both locations, and the fact that the sites had both “been well traveled by other individuals both before and during the investigation. Fragments and other possible evidence have clearly been handled/ moved prior to the arrival of the investigation team”.

In Zamalka/ Ein Tarma, the team found similar alleged munitions on the roof of a five story building, and in an open field. Both “had features consistent with that of an unguided rocket”. The report includes photographs of parts of the munitions.

The inspection team said that of five impact sites, three were unsuitable for determining the munitions’ trajectory. The sites at Moadamiyeh and Ein Tarma allowed for the likely trajectory of the rockets to be determined.

The munition linked to the impact site at Moadamiyeh matches “one of the variants of the M14 artillery rocket, either with an original or improvised warhead. The rocket was likely launched form a single, multi-barrel launcher.

The munition linked to the impact site at Ein Terma matches a 330mm caliber artillery rocket and was launched with an azimuth of 105 degrees in an east-southeast trajectory.

Regarding the US-Russia agreement that Assad place his chemical weapons stocks under international control, Ban said that he “agree[d] there should be consequences for non-compliance. Any use of chemical weapons by anyone, anywhere, is a crime.”

The UN Secretary General said that the chemical weapons attacks were just part of the Syrian conflict.

We should not lose sight of the broader perspective of the Syrian crisis. The terrible loss of life on 21 August was the result of one of many attacks that have collectively killed more than 100,000 people in Syria during the past two and a half years.

The UN Commission of Inquiry has reported that Government and pro-government forces have committed murder, enforced disappearances, extrajudicial executions, rape and torture against civilians. It has also reported that anti-government armed groups have committed murder, executions, torture and hostage-taking. There has been indiscriminate shelling of civilian neighborhoods by all sides. Yet arms continue to flow to the country and the region.