Iran Analysis: Rouhani To Revolutionary Guards “No Politics, But You Can Have Economic Role” 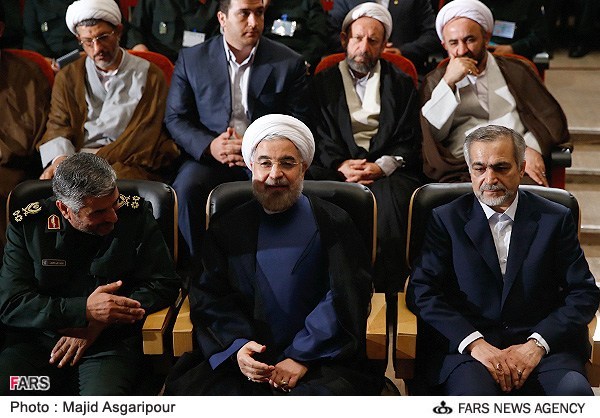 In an address to high-ranking IRGC commanders on Monday, President Hassan Rouhani invoked the late Ayatollah Ruhollah Khomeini, saying that the Guards should should stay out of “political games”.

The IRGC is “beyond Iran’s political processes”, the President added.

However, Rouhani also said that he did not accept rumors that the IRGC were competing with the public and private sectors over its role in the economy.

Rouhani’s comments regarding the IRGC’s political and economic roles comes after weeks of tension with between Rouhani and the Guards over issues like Syria and the nuclear talks.

In his speech, Rouhani was effectively setting out clear boundaries for the role of the IRGC, an armed organization parallel to the regular army with the mission of guarding the Islamic Revolution.

In doing so, he openly referenced and quoted Khomenei in stating the case for the IRGC’s non-involvement in politics.

The question over the IRGC’s involvement in politics began almost as soon as Ayatollah Ruhollah Khomeini created the organization by decree on December 4, 1979, a day after the Islamic Republic ratified its new Constitution. The IRGC’s role was initially set out in Article 150 of the Constitution:

The Islamic Revolution Guards Corps…is to be maintained so that it may continue in its role of guarding the Revolution and its achievements. The scope of the duties of this Corps and its areas of responsibility, in relation to the duties and areas of responsibility of the other armed forces, are to be determined by law with emphasis on brotherly cooperation and harmony among them.


Khomeini made it clear that the IRGC was not to be involved in politics — or at least, certain aspects of politics. In a speech on the occasion of Imam Reza’s birthday, Khomeini said:

However, the Guards set out their own guidelines for how they wanted to operate, defining their two main tasks in 1981 as, “guarding the principle of government by the Supreme Jurist and the principle of Jihad”, and saying that, “the Guards cannot be robbed of a political dimension or ideological beliefs.”

The 1982 IRGC statute banned individual IRGC members from political activity but opened up the possibility for the IRGC as an organization to intervene in politics, stating that the IRGC must “realize the divine ideology and expand the rule of God through the legislation of the Islamic Republic of Iran”.

Since then, the IRGC has expanded its role both in politics and — beginning during Hashemi Rafsanjani’s Presidency — in the country’s economy.

In his speech on Monday, Rouhani used Khomeini to set out boundaries for the IRGC’s role, praising it for its activity in key issues relating to the country’s military and security, including terror operations against Iran, resolving insecurity in first years after the 1979 Revolution and eliminating conspiracies by the “global arrogance countries” against Iran.

He underlined that all Iranian people must feel confidence, relaxation and comfort and see IRGC as their defender.

“The IRGC is different from the world’s classic armies,” he said, emphasizing that the enemy fears IRGC not because of its military equipment, but because of its “spirituality and devotion”.

Significantly, the President set out an economic role for the IRGC, saying that the Guards should continue to take part in large-scale oil and gas projects and dismissing concerns that the IRGC is competing with the public and private sectors in the economy.

A Push-Back By The IRGC?

Already, there appears to be a possible push-back against Rouhani’s attempt to define the IRGC’s role as being outside of politics.

Fars News, which is close to the IRGC, completely ignores the President’s comments on staying out of politics, and instead reports only Rouhani’s praise of the IRGC’s military role.

Rouhani underscored the Islamic Revolution Guards Corps’ might and power in defending the country’s territories and interests, but meantime, said that the IRGC is a force to establish peace and not to ignite war in the region.

Fars Persian quotes Rouhani as saying that, because of sanctions, the IRGC must undertake certain large-scale national oil and gas projects, “since the IRGC knows the country’s conditions very well”.

Tasnim News, which was started by Fars News reporters and has close ties to the IRGC, emphasizes Rouhani’s economic comments as well:

[Rouhani] further called on the IRGC to assume responsibility for carrying out some major national projects, so that it can ease the burden on the government, particularly in economic fields.

“I ask the IRGC to assist the administration in countering sanctions and tackling commodity smuggling,” the Iranian President pointed out.


A Twitter account which invokes Rouhani’s name but may be linked to another faction within the regime, possibly one close to the IRGC also ignores the President’s main statement on politics, and focusses on the economic issue:

Pres. #Rouhani: "I do not believe in the rumor that claims #IRGC competes with the nation when it comes to economics." #Iran

Dr. #Rouhani at nationwide conference of #IRGC commanders: IRGC cannot be considered at the sidelines or within the political currents.

Sepah News, the IRGC’s official public relations outlet, headlines with, “The IRGC Will Assist The Government In The Economy And In Fighting Corruption”.

Meanwhile, a Twitter account linked to Rouhani’s election campaign team and which continued to operate after the election tweeted only the positive statements about the IRGC’s military capabilities, ignoring the economic and political issues:

All Iranian citizens, Muslim & non-Muslim, should feel security & peace when they see an #IRGC member & should consider him their protector