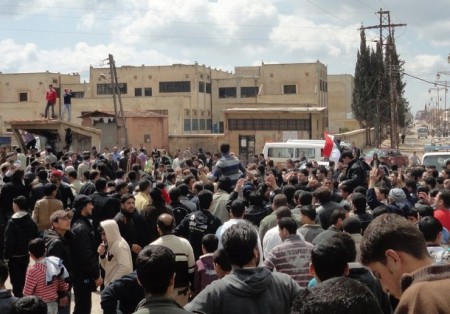 Almost 2 1/2 years ago, the Syrian conflict began with peaceful protests in Daraa city in the south, followed by the regime’s attempt to crush any dissent.

In the Daily Beast, a former Syrian Army sergeant — imprisoned for challenging orders to shoot civilians — describes the start of the uprising:

No one thought anything like this could ever happen in Syria. When I reported for my conscription in 2010 I thought I would do my two years of service without anything happening. Everyone said it would be bad, that they would insult you and hit you, but you could put up with it. I didn’t think I would ever see a war. Before the war I was a short-order cook in Zabadani, which is a beautiful tourist valley in Reef Damashq, near Lebanon. All kinds of foreigners came there for vacation, Khaleejis [Gulf country citizens], Lebanese, even Europeans. The mountains are very beautiful there.

After six months’ basic training in Khan Ash Shaykh, I was made a sergeant in charge of a BMP [a Russian-made armored personnel carrier] section. I was in charge of 14 privates in my unit, almost all young Sunni Arab guys. Kurds like me usually don’t get made sergeant. There were 16 sections like mine in my company with a captain in charge. There were no lieutenants in our unit, just musa’ada, or warrant officers, to help the captain.

Our captain had a very strong voice and a strong personality; he was an Alawi like most officers. He never sounded unsure of himself or conflicted about what we had to do in Dara’a. While he got his orders from the ameed — the colonel — mostly he had freedom to do anything he wanted in our assigned area: arrests, raids, shootings, destroying buildings.

Our unit was sent to Dara’a after the protests started in March of 2011 and our area was at the center of the problems because it contained the Umari Mosque. There was no base for us in Dara’a so we took over an elementary school and turned it into our base. At the beginning we never worried about being attacked, we just had to deal with protests. We thought we would be there for a few weeks and then things would settle down.

When we arrived in Dara’a we were given strict orders to never speak with civilians there. Not during arrests, not breaking up protests, not on patrols. You would be beaten and sent to jail if you were seen speaking at length with civilians. We were told repeatedly that the protests were instigated by infiltrating foreigners, mostly supported by the U.S. and Western powers to undermine Syria, and that most of the protesters weren’t even Syrian. We were told they were Iranians, Afghanis, Americans, and Pakistanis forming these groups. As time went by it was obvious this wasn’t true and much of it didn’t make sense, but you couldn’t speak openly about it. At first, most of us just accepted that foreigners were behind it all.

In the beginning we were strictly prohibited from shooting at the protesters and the officers were very careful to avoid confrontation. At first we would just show up and surround the protests and hope that the show of force would convince them to disperse. Almost all of the protests started after Friday prayer at the mosques, because that is when all the men in the area gather together. We came to expect that every Friday we would have to break up a protest, but they grew larger and larger. When they became too large for us to arrest and disperse we began firing over the crowd or at unoccupied buildings nearby. When this didn’t work, my captain ordered me to fire a tank shell into a building near the protesters, but we didn’t kill anyone until later in April.

We heard that protesters had been tearing up posters of Assad, I don’t know where, and the colonel flew into a rage. I remember the protest that Friday outside the Umari mosque and at first we fired over the heads of the protesters. Then the colonel arrived at our position and told the captain to have us shoot into the crowd. The captain gave the order and he was the first one to shoot at them with his rifle. It wasn’t a free for all, but my soldiers all shot a burst or two into the crowd and everyone ran. Some shot more than others.

I remember it was a warm and mild day, sunny and clear. Within 10 minutes of the shooting starting, the streets were empty. After a while, people carefully came up to drag the bodies out of the street. I remember seeing the bodies lying in the street. Our chain of command told us that the eight we had killed in the protest had all been foreigners. None of us had hesitated to shoot, because we all believed it. We only realized over time.