Syria Feature: Islamic State of Iraq, Jabhat al-Nusra, and the Story of Raqqa 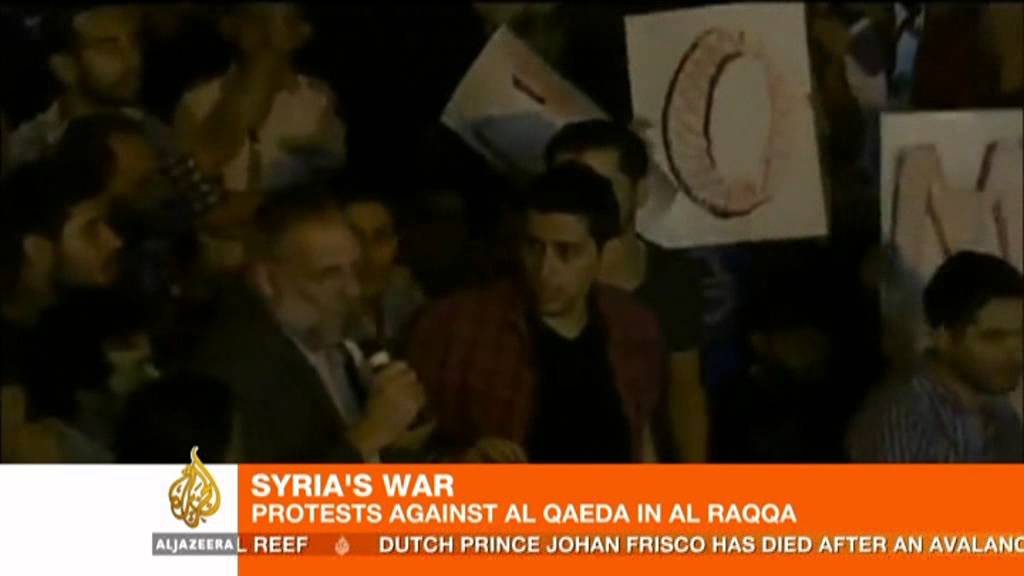 One of the more confusing recent stories in the Syrian conflict has been about the contest for the control of Raqqa in northern Syria, the largest city held by the insurgency, where various factions are vying for political and social leadership.

That ongoing contest, coupled with the difficulty of getting reliable information from ground, has led to some dramatic portrayals of events and particularly of the role of Islamist faction the Islamic State of Iraq and As-Sham (ISIS).

Al Jazeera English’s report on Monday from Raqqa morphed footage of local protests against ISIS into a tale of Raqqa as “an Al Qaeda stronghold” and local unhappiness with “Raqqa’s New Rulers”:

On Tuesday, the Washington Post turned some useful information from activists — notably of detentions and kidnappings by ISIS —- into terrifying claims including of “beheadings”, with the dramatic headline “Al Qaeda Expands in Syria Via Islamic State“.

See Syria Analysis: How To Bury An Important Story Under “Al Qaeda” & “Beheadings”

Writing for Open Democracy, a Syrian-based activist — under the pseudonym “Rita” — offers one way to sift through the hyperbole and scare stories.

“Rita’s” account of what is happening in Raqqa is of course only a snapshot of an unfolding story, which has no clear resolution. However, it is a valuable reminder that the contests within insurgent-held areas, and between insurgent factions, go far beyond the simplistic scare label of “Al Qaeda” and the equally scary exaggerations and simplistic “analyses” in other claimed reports.

“Rita” begins with a valuable reminder: in April, ISIS entered into a bitter dispute with the Islamist faction Jabhat al-Nusra when its leaders in Iraq tried to claim the merger of the two groups. She goes beyond the simplistic and misleading portrayal of two “Al Qaeda-linked” factions, contrasting ISIS’s emphasis on the trans-national fight with Jabhat al-Nusra’s focus on local events in Syria:

Al-Nusra is made up of mostly Syrian fighters. On the other hand, fighters belonging to al-Dawla [ISIS] are known as al-Muhajireen – a reference to the displaced community of Muslims who along with Prophet Muhammad found refuge in Medina. For the most part, al-Dawla is made up of foreigners who have had the experience of jihad in other countries.

The dispute led to a battle for troops, with ISIS trying — and succeeding — in luring away fighters from Jabhat al-Nusra. And it also developed into a showdown in Raqqa, transforming “Life in Islamist-Controlled Raqqa“:

However, a number of fighters remained unpersuaded [by ISIS]. The commander of al-Nusra in Raqqa, Abu Saad–– a university graduate originally from the city who had previously been detained on the back of participating in peaceful demonstrations against the regime –– rejected the declared merger between the two factions and kept loyal to [Jabhat al-Nusra] with only 70 other fighters.

The response from al-Dawla [ISIS] was swift. [Abu Saad] was kidnapped, detained briefly, and whipped by members of al-Dawla who considered him a rebel. Al-Nusra withdrew from Raqqa and relocated to its surrounding countryside. Abu Saad and others remained in their city fighting under the banner of one of the more powerful FSA [Free Syrian Army] militias –– the 11th Division.

“Rita” then refers to ISIS’s attempt to “rule” in Raqqa — complementing other reports of abductions and detentions, as well as protests by residents against the faction:

Al-Dawla’s policy with regards to civilians hasn’t been any different. There have been several incidences of kidnapping of peaceful and secular activists during the last two months. M.M is an activist from Raqqa detained by al-Dawla when they discovered that he hadn’t performed his prayers to their exact standards. They kept him for several days to teach him how to offer up prayers! One of the al-Dawla fighters responsible for arresting M.M told him:”whoever doesn’t pray is an infidel even if he was my father. Every infidel deserves to be punished!”