Syria Analysis: How To Bury An Important Story Under “Al Qaeda” & “Beheadings” 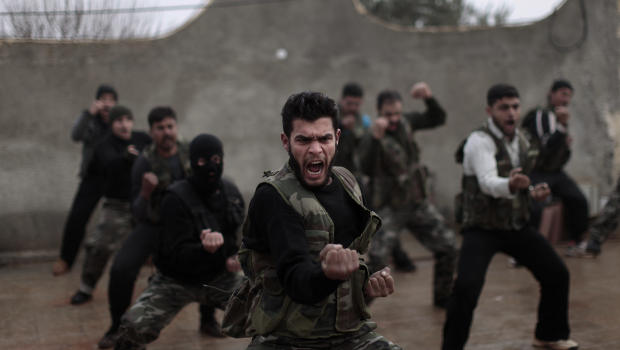 This morning, we posted a separate feature — a report on the contest between factions for control of Raqqa, the largest city in Syria held by insurgents — including an account of tension over kidnappings and beatings by one of those factions, the Islamic State of Iraq and as-Sham.

The parallel to the importance of that story, and its lessons for the future of the insurgency and the Syrian conflict, is how events can be distorted and even lost in the quest for sensational headlines and description.

On Tuesday, the Washington Post highlighted both the possibilites and the perils of such coverage, with its attention to Raqqa buried under scare quotes, exaggerations, and general speculation posing as analysis.

The burial begins with the headline, whose keywords will strike fear into the heart of any American: AL QAEDA EXPANDS IN SYRIA VIA ISLAMIC STATE.

The Post spends the first page of its story setting up its threatening villain. We learn that ISIS has a “radical ideology” and that it employs “tactics such as kidnappings and beheadings”, through which “the group has stamped its identity on the communities in which it is present”.

Instead, the Post reaffirms that ISIS is very scary because it even kidnaps and assassinates Westerners including journalists and aid workers:

Civilian activists, rival rebel commanders and Westerners, including more than a dozen journalists and relief workers, have been assassinated or abducted in recent months in areas where the Islamic State has a presence.

We know that a “rebel commander” was kidnapped — not from the Post, however, but from EA’s separate feature.

Meanwhile, which Westerners were kidnapped and assassinated? When? Where? The Post only says, “Most of the cases are being kept quiet for fear of jeopardizing the victims’ release.”

The Post adds to the vagueness and confusion by telling us that “already-dangerous parts of rebel-held territory” (where?) have been turned into “effective no-go areas for many Syrians as well as foreigners, deterring aid efforts and media coverage and potentially complicating future attempts to supply more-moderate factions of the rebel Free Syrian Army”.

Later, we will learn that the FSA is in any case only “loosely structured” — without, inevitably, any detail to back up this assertion. But for now, the Post is concerned with continuing its scary tales of mysterious kidnappings of some people in some places. Now the culprits are:

“Criminal gangs” who have “taken advantage of the vacuum of authority to carry out kidnappings for ransom, mostly of Syrians”

The Post only gets to the point of its story — if the situation in Raqqa is really the point — on page 2:

In the eastern provincial capital of Raqqah, which has emerged as the Islamic State’s biggest stronghold, clashes with more-moderate rebel units erupted twice over the weekend, killing at least 13 rebel fighters and civilians, according to residents.

Meanwhile, residents there have been staging near-daily protests demanding the release of people thought to have been abducted by the Islamic State, foremost among them a renowned Italian Jesuit priest, the Rev. Paolo Dall’Oglio, who spent decades living in Syria before he was expelled last year for his opposition sympathies. His whereabouts have been unknown since he arrived in Raqqah late last month to attempt to open an interfaith dialogue with the Islamic State.

Others who have been abducted in Raqqah include the head of the newly formed provincial governing council, a top official with the humanitarian assistance arm of the main Syrian Opposition Coalition and the local commander who led the capture of Raqqah from government forces in March.

“They kidnap anyone who opposes their point of view,” said a Raqqah activist who spoke on the condition of anonymity because of safety concerns.

The Post does explain the reason for the rift between ISIS and Jabhat al-Nusra, but does not link this specifically to events in Raqqa. Instead, the Post makes the sweeping, unsupported, and tangential claim that ISIS is “more organized” than the Free Syrian Army, which is “loosely structured”.

So none of this really gets us any closer to understanding that important case of Raqqa.

But then again, does that really matter? The Post’s real concern — while not that of readers seeking to understand the reality of the political, social, and economic situation as well as the state of the insurgency — is summed up in the phrases from the “analysts” to whom it appeals for authority:

[Syria] gives al-Qaeda a foothold in the heart of the Middle East….At least perception-wise, it appears the Islamic State is doing the better job….They can plan better and discipline better, and that is dangerous.