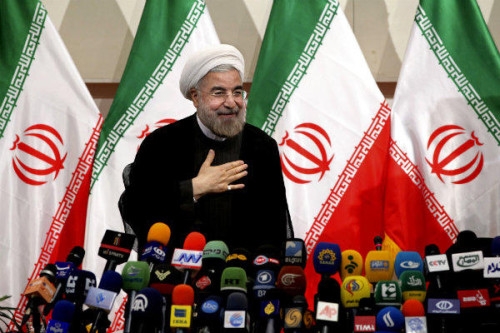 President Rouhani reiterated his foreign-policy line on Saturday, telling State news agency IRNA that he would distance himself from the confrontational style of his predecessor, Mahmoud Ahmadinejad:

We don’t have the right to use foreign policy to chant slogans or clap. Foreign policy is not where one can speak or take a position without paying attention. People in the June 14 elections declared that they want a new foreign policy.

Rouhani continued by combining firmness on Iran’s basic objectives with the indication of a shift in Tehran’s approach to other countries, “Reconsidering foreign policy doesn’t mean a change in principles because principles remain unchanged. But change in the methods, performance and tactics, which are the demands of the people, must be carried out.”

The President offered no details on specific issues, from Tehran’s nuclear programme to the Syrian conflict, but his continued call for “engagement” with the “West”, including the US, was clear.

That call was also made by Rouhani’s new Foreign Minister, Mohammad Javad Zarif, in an interview with the on-line journal Iranian Diplomacy:

The election of Mr. Rohani shows that the people have decided to have constructive interaction with the world and, through his speeches and choices, Mr. Rohani has also displayed his political determination to do so. Now, what is important is for the same determination to be formed on the other side.

Significantly, Iranian Diplomacy is run by Sadegh Kharrazi, a former Deputy Foreign Minister and senior advisor to President Mohammad Khatami. Kharrazi has been a long-standing advocate of “engagement”, even at the height of US-Iran tensions during the Ahmadinejad Government.

Mehr News claims that the file on Iran’s nuclear program, including international discussions, has been transferred from the Supreme National Security Council to the Foreign Ministry.

The SNSC has been seen as directably answerable to the Supreme Leader, rather than the President, whereas the file in the hands of the Foreign Ministry would increase scope for action by President Rouhani and Foreign Minister Mohammad Javad Zarif.

The SNSC was headed until this summer by Saeed Jalili, a losing candidate in the Presidential election and seen as a “hard-liner” in comparison with Rouhani and Zarif.

Law court clears #Rafsanjani's daughter from charges against her. #Iran

Hashemi was arrested in February 2011 during anti-regime protests and was sent to prison for six months in autumn 2012.