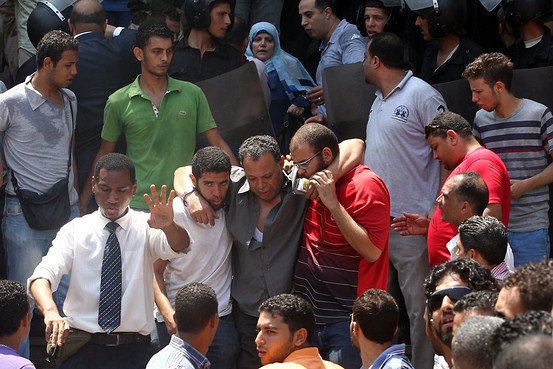 The protesters have been inside the mosque since Friday’s violence in the Square, in which scores of people died amid fighting between security forces and anti-regime demonstrators at a nearby police station.

Some of the demonstrators left on Saturday, but an unknown number remain in the sanctuary.

There are conflicting accounts of the conflict at the mosque, with AFP saying police and military forces fired volleys at the building after they were shot at from inside the mosque and its minarets. Three witnesses told Reuters that gunmen opened fire on security forces from a second-floor window in the mosque.

However, Wall Street Journal reporter Matt McBradley — who was subsequently attacked by pro-regime supporters and then picked up by the army, apparently for protection — writes:

Security forces in armored personnel carriers surrounded the mosque by Saturday morning, and appeared to fire the opening shots toward the mosque at about 1:30 p.m. using what appeared to be automatic weapons fired from their vehicles. It was not apparent to a reporter on the ground that protestors in the mosque were firing back.

A witness, Abdel Kouddos, told Al Jazeera: “There were scenes of heavy gunfire. Police and security forces began firing at the minarets. Shortly after that there was fire from inside the mosque. it was unclear who was doing the shooting.”

Police dragged several men out of the mosque in the confusion. The protesters were confronted with angry neighbourhood residents who attacked them with sticks and iron bars.

One man, Waleed Attar, said he was among a group who managed to escape the building as gunfire erupted: “We didn’t know where the bullets were coming from. Even the security forces took shelter. The gunmen were in plain clothes.”

He said the group managed to flee and avoid the pro-regime attackers: “We found our way between vehicles before the thugs could trap us, we ran for fear of being shot. Many of those trapped were being assaulted by thugs. They said we would all be slaughtered.”

Earlier, crowds of “popular committees” created a cordon around the mosque, trying to storm the protestors holed up inside. Police prevented the hundreds of civilians —some armed with wooden planks — from entering the mosque.

One of the women inside the mosque, “Fatima”, spoke to Al Jazeera English:

(Featured Photo: Injured protester is assisted as he leaves the Fateh Mosque — EPA)