Syria, 23 June: Now What for Foreign Weapons to Insurgents? 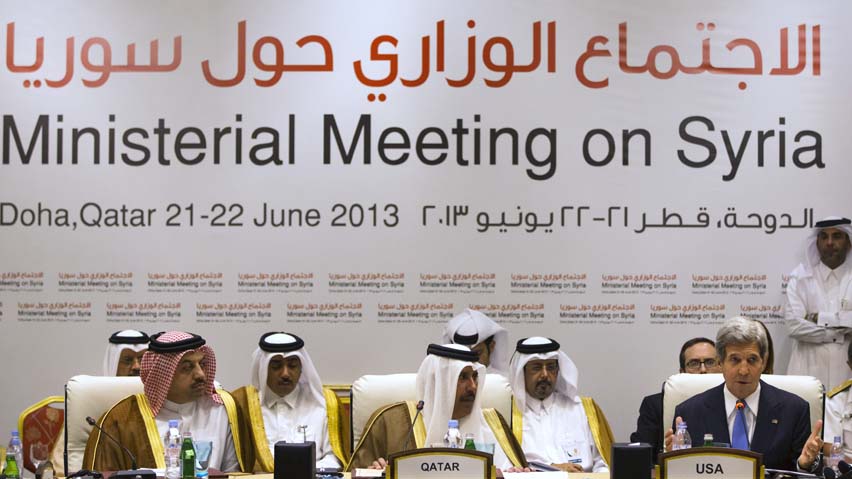 On Saturday, 11 leading nations of the Friends of Syria group agreed “to provide urgently all the necessary materiel and equipment to the opposition on the ground”.

Meeting in Qatar, the group expressed concern about the growing sectarian nature of the conflict and the increasing presence of radical and “terrorist elements”, while condemning “the intervention of Hezbollah militias and fighters from Iran and Iraq” and demanding that they withdraw immediately.

American Secretary of State John Kerry said, “The US and other countries, in their various ways — each choosing its own approach — will increase the scope and the scale of assistance to the political and military opposition. That is why we are working with our allies to coordinate our support to the Syria [National] Coalition and the Supreme Military Council.”

Al Thani spoke “secret decisions about practical measures to change the situation on the ground in Syria”: “Most countries, except for two, are agreed on how to provide assistance to the rebels through the military council.”

The US Government said for the first time last week that it will overtly supply weapons to the insurgency, but subsequent statements were cautious about the scope of the aid, especially anti-tank and anti-aircraft weapons. At the same time, leaked reports reinforced our knowledge from early this year of American involvement in covert training and provision of weapons, including heavy arms.

The tension, within the Obama Administration and among the nations in the Friends of Syria, appears to be over the extent of public intervention. In particular, EA sources inside Syria indicate that Americans on the ground in Turkey and Jordan have been limiting the amount of weapons — despite the build-up of substantial stocks, especially via Saudi and Qatari financing — although there are signals that the US restrictions may be easing.

Joanna Paraszczuk offers more in a special analysis, “The US-Saudi Conflict over Arms to Insurgents“.

Syrian State media report Sunday that the Syrian army has repelled an attack on Minegh Airbase in Aleppo province, following attacks by insurgents.

SANA report that the Syrian army also “also destroyed a number of terrorists’ dens in the villages of al-Alqamiyeh, Minnegh and al-Zira’a in the surrounding of the airport. The terrorists’ weapons were destroyed, including a mortar and a number of heavy machineguns”.

The insurgents explain how they advanced on the airbase.

This video shows aircraft burning in the airbase on Sunday:

This video is a compilation of footage from throughout Sunday. The first part is purportedly taken following the bombing today of buildings in the airbase. The video says that four tons of explosives were used. Following the footage of the explosion (which we posted earlier). The second part shows insurgents firing on Syrian army helicopters in the airbase. The third part repeats the footage shown above.

Insurgents Claims Killing of 5 in Attacks on Damascus Security Compounds

Opposition activists have said that insurgents killed at least 5 people in attacks on at least two security compounds in Damascus on Sunday.

The activists said an attack on a base for regime militia in Rukn al-Deen — earlier called a “car bomb” — was carried out with explosives, while mortars were fired on a target in Bab Musalla with mortar rounds.

The activists did not say if those killed were members of the security forces. Syrian State media earlier said three civilians were slain in the Rukn al-Deen

The sources said insurgents and the Syrian military were fighting in the area, close to the Qaboun and Barzeh neighbourhoods, which have been shelled by the regime to drive out insurgents.

Footage on State TV of the aftermath of the Rukn al-Deen attack:

French President Francois Hollande appears to have set conditions on overt provision of weapons to the insurgency, saying there must be assurance that they are only received by “moderate” forces

Speaking in Doha, where 11 leading nations of the Friends of Syria group pledged on Saturday to give military assistance to the opposition, Hollande said, “We cannot provide these arms to groups that would use them against the interests of a democratic Syria or against us.”

The President continued, “The opposition must retake control of these areas and push these [extremist] groups out….[If these groups] benefit from the chaos in future, Bashar al-Assad will seize this as an excuse to continue his massacres.”

Hollande is now in Jordan in discussions with King Abdullah and other leaders.

Members of the predominantly Shia Lebanese Option Group demonstrated on Sunday outside the Iranian Embassy in Beirut’s Bir Hassan neighborhood, to commemorate the death of Hashem Al Salman earlier this month.

Al Salman, a young Shia man, was fatally shot during a protest against increased involvement by Hezbollah and Iran in the Syrian conflict, which is increasingly spilling over into Lebanon.

The Lebanese Option Group, which is opposed to Hezbollah, is led by a Shia politician, Ahmad Al Assad. Beirut’s Bir Hassan neighborhood, where the Iranian Embassy is located, is a largely Shia area with strong support for Hezbollah.

Footage posted on Saturday purports to show insurgents from the Liwa al-Fateh using a Konkurs anti-tank missile to attack and hit a Syrian army T-72 tank in the Minegh Airbase.

Reports are circulating of a large explosion at the Minegh airbase — under siege by insurgents by months — with claims of a car bomb. The footage of the bombing is posted by the Liwa al-Fateh.

Photograph of the explosion (from Liwa al-Fateh’s Facebook page): 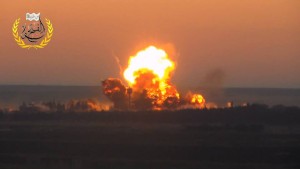 Footage via Al Jazeera Arabic of a car bomb, reportedly by the insurgent Ahrar al-Sham, near Khan al-Asal in Aleppo Province on Saturday:

Meanwhile, Al Manar TV, the outlet of Hezbollah, says a car bomb in the Rukn al-Deen neighborhood of Damascus has killed three and wounded 10 this morning. Syrian State outlet SANA says that the bomb was a suicide attack and took place behind the Ibn Al Ameed bakeries in Rukn ad-Din, and that there were civilian casualties.

The Local Coordination Committees claim 103 people were killed on Saturday, including 24 in Aleppo Province, 23 in Damascus and its suburbs, and 15 in Idlib Province.

The Violations Documentations Center records 64,347 deaths since the start of the conflict in March 2011, an increase of 109 from Saturday. Of the dead, 49,444 are civilians, a rise of 63 from yesterday.