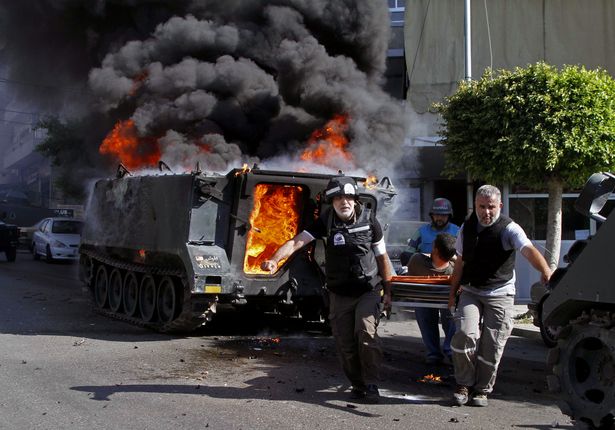 In some of the most serious fighting in Lebanon this year, clashes on Sunday near the southern city of Sidon killed at least 12 people, including 10 soldiers.

The violence broke out when supporters of the Sunni cleric Sheik Ahmad al-Assir, a prominent opponent of Hezbollah, fired at Lebanese troops as other al-Assir followers were held at a checkpoint.

Two of al-Assir’s entourage were slain, while security sources said 38 soldiers were wounded.

Military officials said the al-Assir group fired RPGs, destroying at least one armoured personnel carrier, as the battle escalated from 2 p.m. throughout the afternoon and evening.

The Lebanese army said that it would “beat with an iron fist whomever sheds the blood of the army, and it will retaliate against everyone who provides a political or journalistic cover for those people”.

Al-Assir, in a posted video, accused the military of association with Hezbollah and Iran: “I call on all the peaceful supporters to go block roads, and on those Sunnis and non-Sunnis in the army to leave the army now.”

The fighting also affected electricity supplies in Lebanon, including Beirut, with damage to the Zahrani-Aramoun power network seperating it and other production stations from the main grid. 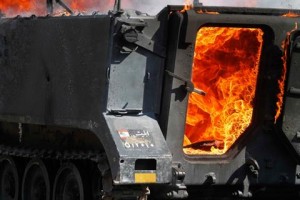 The Emir of Qatar, Sheikh Hamad bin Khalifa Al Thani, has confirmed to members of the ruling family that he will transfer power to son.

Sheikh Hamad has been in power since 1995. His successor, Sheikh Tamim bin Hamad Al Thani, 33, is the second son of the emir.

Sheikh Hamad will the nation on Tuesday.

At least 39 people have been killed and dozens injured in a series of bomb attacks targeting mainly-Shia areas of Baghdad.

Eight parked vehicles rigged with explosives were detonated in neighborhoods across the Iraqi capital on Monday.

An appeals court has confirmed the acquittal of a policewoman on trial for torturing a journalist arrested at the outset of mass protests in 2011.

The unnamed defendant was cleared of abusing female report Naziha Saeed, a correspondent for France 24 and Radio Monte Carlo Doualiya, during the crackdown on anti-regime protests in May 2011.

Saeed was summoned by the police for questioning about her links with Al-Manar, the outlet of Lebanon’s Hezbollah.

Lebanon: Gunmen in Tripoli Square in Support of Sunni Cleric

Gunmen occupy a square in Tripoli in support of Sunni cleric Ahmed al-Assir, whose supporters have been fighting the Lebanese army near Sidon:

Turkey: BBC Concern Over “Threat” to Reporter by Ankara Mayor

“The BBC is very concerned by the continued campaign of the Turkish authorities to discredit the BBC and intimidate its journalists,” Horrocks said.

The statement reported that “a large number of threatening messages” had been sent to Girit because of her coverage of the nationwide protests against the Erdogan Government.

On Sunday, Gökçek, a member of the ruling Justice and Development Party, accused Girit of being an “English agent” and of engaging in “treachery to her nation.” He urged his followers to condemn her by sending tweets with the hashtag #ingiltereadınaajanlıkyapmaselingirit (“Don’t be an agent on behalf of England Selin Girit”).

“I want that everyone who loves their country to make the hashtag a trending topic. That way, our reaction will be heard abroad,” the Ankara mayor said via Twitter.

Girit had earlier tweeted from Yoğurtçu Park in Istanbul’s Moda neighborhood, where people had gathered after the police’s clearance of Taksim Square and Gezi Park last weekend.

Human Rights Watch has issued a report claiming that Morocco’s courts are convicting defendants based on confessions through torture or falsification by police.

The 100-page report examined five trials between 2009 and 2013 of a total of 77 people, including protesters seeking reform, Western Sahara activists, and persons accused of plotting terrorism. HRW found that judges failed to investigate seriously contentions by defendants that their confessions were obtained through illegal means and then used as the main, if not the sole, basis for conviction.

A suicide bomber killed Colonel Ghazi Ali al-Jubouri, head of counter-terrorism for Salahuddin Province, on Monday as he left university in the city of Tikrit after sitting an exam.

The attack wounded two of al-Jubouri’s bodyguards outside the law faculty at the University of Tikrit.

Salahuddin’s previous counter-terrorism chief was killed by a suicide bomber while he was shopping in 2009. The Islamic State of Iraq claimed responsibility for that attack.

In a separate incident in Mosul, a parked car bomb near an army patrol killed two soldiers and wounded another on Monday, police said.

Lebanese commandos have seized the complex of Sunni cleric Sheikh Ahmad Assir, whose supporters have been fighting the military in clashes that have claimed the lives of at least 17 soldiers and more than 25 gunmen.

Sources said despite having taken control of the complex, soldiers were still trading gunfire with snipers located on the rooftops of nearby buildings.

The sources said army eavesdropping devices indicated that al-Assir was still in the vicinity of the complex, urging his gunmen not to surrender to the military and to “fight to the death”. They said the military has captured 30 members of Assir’s group.

Egypt: “Fuel Reserves Run Out by End of Month”

According to Haddara, Egypt has enough diesel fuel to last eight days, butane enough for ten days and petrol enough for 14 days.

Anadolu reports that the Egyptian government has requested a $265 million loan from the Islamic Development Bank to finance the import of diesel in the first quarter of 2013/14.

The website of the ruling Freedom and Justice Party quoted Minister of Supply Bassem Ouda that the State’s current reserves of diesel fuel are “sufficient.”

In August, the Government intends to introduce a smart-card fuel allocation system aimed at reducing energy subsidies. The new system will allow consumers to purchase limited amounts of subsidised fuel, beyond which they will have to pay market prices.

Meanwhile, Minister of Planning Amr Darrag said Egypt will sign a deal with Saudi Arabia to obtain a $500 million oan to help finance its budget deficit.

Iraq’s soaring oil exports were checked in May, amid poor weather at southern ports and sabotage of a pipeline to the Turkish port of Ceyhan.

At least two attacks in May targeted the export pipeline which runs through northern Iraq.

Baghdad’s exports have risen steadily in the last year, with Iraq replacing Iran as the world’s second-largest exporter of oil.

Egypt: Video of Shia Killed in Giza Province by Villagers

Footage has been posted of Sunday’s attack in a village in Giza Province, near Cairo, which killed at least four Shia men and wounded scores.

About 3,000 villagers surrounded the house of a Shia leader and attacked men performing religious rituals, beating them and dragging them along the ground.

Israel has carried out airstrikes in Gaza Strip, following the overnight launch of six rockets from the territory.

No casualties were reported in the incidents.

Two of the rockets, fired into southern Israel, were shot down by the Iron Dome missile defense system, the Israeli military said.

Fighting between the Lebanese Army and supporters of the Sunni cleric Sheikh Ahmed al-Assir, which killed at least 12 people on Sunday, is continuing near Sidon.

Security sources said the number of soldiers killed has risen from 10 to 15. At least one civlian was killed in the Palestinian refugee camp of Ain al-Hilweh.

The sources said the army was surrounding al-Assir and about 250 of his followers, barricaded in and around a mosque in the Abra suburb of Sidon. An overnight attempt by a group of Salafi preachers to mediate a truce failed.

Other sources said the military, which deployed several tanks in the area, made several attempts to approach the Abra mosque, but was still facing stiff resistance from gunmen in surrounding buildings.

An apartment block reportedly including al-Assir’s home was set ablaze by rocket-propelled grenades while other buildings and dozens of cars were damaged. Ambulances and civil defense units were unable to get into the neighborhood.

Morsi Meets With Head of Armed Forces About Protests

President Morsi has met with General Abdel-Fattah el-Sissi, the Minister of Defense and head of the army, hours after el-Sissi warned that the military is ready to intervene to stop the nation from entering a “dark tunnel” of internal conflict.

Opponents of the Morsi Government have called for mass rallies next Sunday.

Morsi’s Facebook page said el-Sissi “gave an update…regarding the plans and preparations of the Armed Forces for the coming period”, as “the President gave directions to complete with all speed all necessary steps to secure strategic and vital structures of the country in coordination with the Ministry of the Interior”.