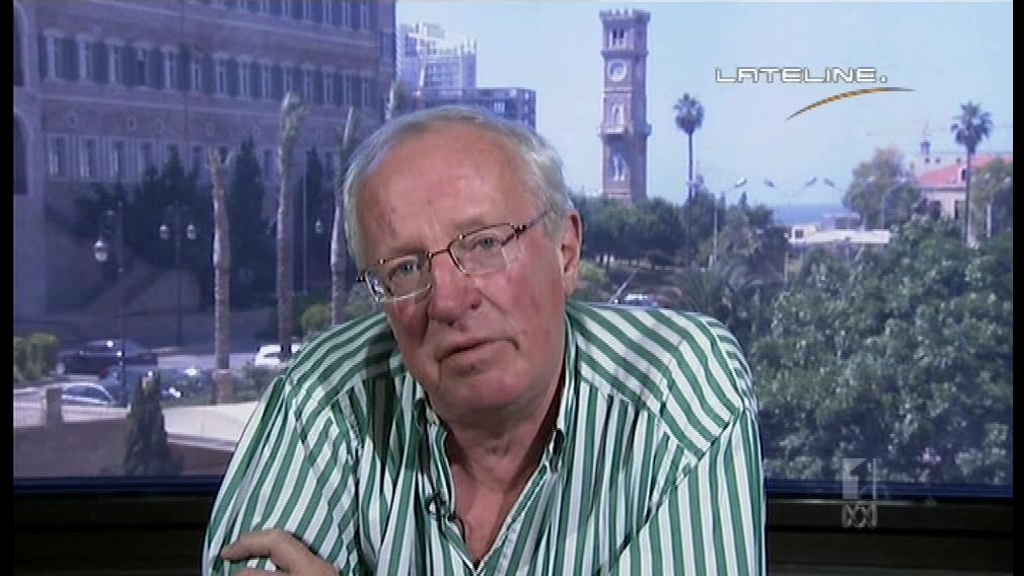 Photo: The Independent’s Robert Fisk offering his analysis of Syria

This morning’s rumour-as-“world exclusive” comes from The Independent on Sunday’s Robert Fisk, sitting in Beirut, who says he “has learned that a military decision has been taken in Iran –– even before last week’s presidential election – to send a first contingent of 4,000 Iranian Revolutionary Guards to Syria to support President Bashar al-Assad’s forces”.

What evidence does Fisk have? Absolutely, apart from whispers in his ear from mysterious “Iranian sources” — affiliation unknown — to support his introduction-as-conclusion, “Washington’s decision to arm Syria’s Sunni Muslim rebels has plunged America into the great Sunni-Shia conflict of the Islamic Middle East.”

Iranian sources say they liaise constantly with Moscow, and that while Hizballah’s overall withdrawal from Syria is likely to be completed soon –– with the maintenance of the militia’s ‘intelligence’ teams inside Syria –— Iran’s support for Damascus will grow rather than wither. They point out that the Taliban recently sent a formal delegation for talks in Tehran and that America will need Iran’s help in withdrawing from Afghanistan. The US, the Iranians say, will not be able to take its armour and equipment out of the country during its continuing war against the Taliban without Iran’s active assistance. One of the sources claimed –– not without some mirth — that the French were forced to leave 50 tanks behind when they left because they did not have Tehran’s help.

Since Fisk offers nothing else about the sources that visited him in Lebanon, let’s review:

1. Without knowing who the “Iranian sources” are or what their affiliation is, how can we trust what they tell Fisk? Can we really believe that Iranians with access to what would be high-level, highly sensitive military information would travel to Beirut and talk to a Western reporter?

2. It is completely unclear on what evidence the assertion “Hizbollah’s overall withdrawal from Syria is likely to be completed soon” is based. Hezbollah General Secretary Hassan Nasrallah announced Friday that the Lebanese group will continue to fight in Syria.

3. The assertion that the US drawdown from Afghanistan is contingent on Iranian “active” assistance is nothing more than ludicrous, and in any case is a complete non-sequitur with respect to the claim of Iranian active assistance to Assad in the form of “4,000 Revolutionary Guards”.

4. Iran has admitted that its Revolutionary Guards have provided logistical and advisory aid to Damascus. It has publicly acknowledged its role in reconstruction, eulogizing as a martyr a leading Guards commander who died in Syria after leading those efforts in that country and Lebanon. So there is “no first contingent” of Guards going to the country — they are already there.

What Tehran has denied is that it has fighters on the ground. And like the regime’s chemical weapons, evidence that Iranian ground troops are fighting alongside Assad’s forces on the ground in Syria has yet to materialise, even in a tittle-tattle “world exclusive” fed to a columnist in Beirut.