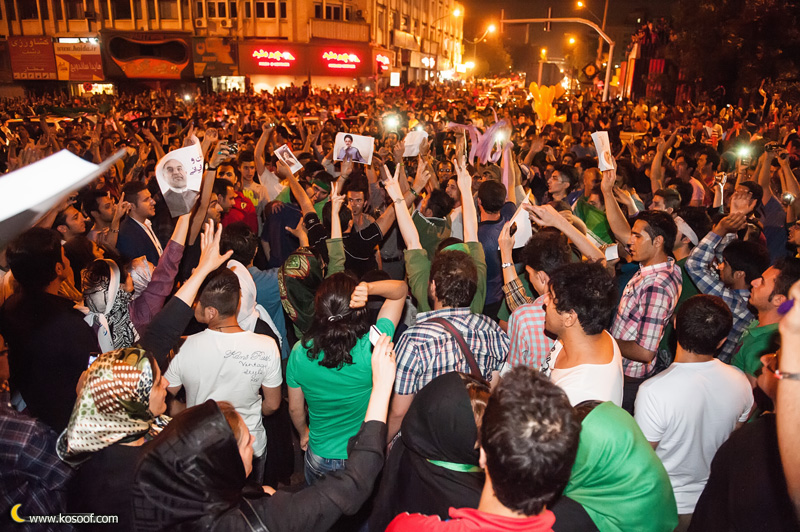 An EA correspondent in Iran, A R Azadi, writes:

On Saturday, Hassan Rouhani, a moderate politician who campaigned with the slogan “A Government of Prudence and Hope”, was declared the winner of Iran’s 11th Presidential election with 18,613,329 votes — 52.49% of all valid ballots.

Three starting lessons from this result:

1. Those who emphasised “ending the current situation” in their campaigns found more support from the electorate. With their verdict, Iranian people showed that they want to end the closed political atmosphere of the last eight years and create better days for themselves.

2- People through their choice showed that they do not like the domestic and foreign policies since 2005. Those policies have led to sanctions, creating a critical situation not even seen during the dark days of the 1980s Iran-Iraq War.

3. By voting for Rouhani, Iranians showed that they want to to improve Iran’s position and stature not just at home but also at the international level.

Beyond those lessons, the platform for Rouhani’s overwhelming victory against his principlist rivals:

While Rouhani set out a different vision than that of his opponents, he could also claim an extensive career within the system:

— Secretary of the Supreme National Security Council, 1989-2005, and current member of the SNSC;

— Member of the Assembly of Experts since 1999;

— Member of the Expediency Council since 1991

Rouhani has also served as head of the Expediency COunci’s Centre for Strategic Research since 1992 and was the head of Iran’s nuclear negotiating team in talks with the so-called EU-3 — UK, France, and Germany — from 2003 to 2005.

2. HIS CAMPAIGN SLOGAN: A GOVERNMENT OF PRUDENCE AND HOPE

Perhaps the main force behind Rouhani’s victory is public desire for moderate reform while avoiding extremism. After the conflict and poor management of recent years exacerbated by the regime’s crackdown after the disputed 2009 Presidential election, Iranian people were looking for change but not a showdown.

3. HIS BACKERS: KHATAMI, RAFSANJANI, AND AREF

Many Iranians voted for Rouhani because former President Mohammad Khatami asked them to do so. Still known and respected as the leader of reformists, Khatami’s endorsement removed talk of a mass boycott and bolstered Rouhani as a viable candidate.

This endorsement, however, was part of a longer-running theme in this election: Khatami’s de facto alliance with Rouhani’s mentor, former President Hashemi Rafsanjani.

Elements of the regime made a calculated decision to block an unexpected — and possible unwelcome — outcome when the Guardian Council barred Rafsanjani’s candidacy, following Khatami’s declaration of support, last month.

The decision appears to have backfired. The Council had to let through Rouhani as a candidate, or risk losing any appearance of a “legitimate” election, while presuming that he did not have the status and thus the threat of Rafsanjani. However, they underestimated the effect when both Rafsanjani and Khatami put their words — and thus the resources of “moderates” and reformists — behind Rouhani.

The foundation for the coalition was confirmed last weekend when the only reformist allowed to stand, Mohammad Reza Aref, stepped aside at the request of Khatami and a ten-man committee. While Aref was unhappy and did not publicly endorse Rouhani, the signal had been put out days before the vote: if you did not want to see the principlists maintain their grip on power, Rouhani was the man to support.

Then there was the unexpected boost for Rouhani from a fellow candidate: the Supreme Leader’s senior aide Ali Akbar Velayati,

Of course, Velayati did not set out to support Rouhani. However, his performance in the election — including his attacks on Saeed Jalili, the Secretary of the National Security Council and chief nuclear negotiator, during the third televised debate — put a very big spoke in the wheel of the principlists.

When Velayati, as Ayatollah Khamenei’s standard-bearer on international affairs, condemned Jalili for his rudeness and lack of insight in diplomacy, he offered a bigger message. Not only had the highest levels of the regime failed to find a “unity” candidate, none of the three men they supported — Velayati, Jalili, Tehran Mayor Mohamad-Baqer Qalibaf — could be seen as reliable in dealing with Iran’s problems at home or abroad.

The regime spent much of yesterday, and will spend much of this week, putting its emphasis on the 72.7% turnout as the “political epic” promised by the Supreme Leader.

The regime is right, but not in the way that it hoped.

The biggest factor in the turnout was whether the dedicated backers of the Supreme Leader and the principlists would participate, but whether those seeking an alternative would show up.

On Friday, former candidate Aref put out the message, “If you don’t vote, you can’t complain”. Senior moderate and reformist figures — including those imprisoned after the 2009 election — echoed the call.

They answered not only Aref but also the Supreme Leader, who said early last week, “Even if — for whatever reason —you don’t believe in the system, vote for the future of Iran.”