Ukraine War, Day 330: US May Back Kyiv’s Attacks on Russian-Occupied Crimea 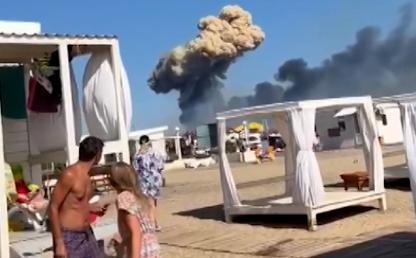 Tourists watch as smoke rises from an explosion at Russia’s Saki airbase in occupied Crimea, August 9, 2022

Following Poland’s indication that German-made Leopard 2 tanks can be sent to Ukraine even without Berlin’s approval (see 1623 GMT), Lithuanian Defense Minister Arvydas Anusauskas says several countries will announce the despatch of the tanks at Friday’s meeting at the Ramstein Air Base in Germany.

Saying “some of the countries will definitely send Leopard tanks to Ukraine,” Anusauskas estimated the total will be in the hundreds.

But Polish Prime Minister Mateusz Morawiecki told reporters that he was “moderately sceptical, moderately pessimistic” about Berlin giving permission “because the Germans are defending themselves against this like a devil protects himself against holy water”.

A spokesperson for the German Government
said it has yet to receive a request from any country for permission.

This takes our total military aid to Ukraine over 1% of our GDP.

The package includes howitzers, grenade launchers and ammunition – what Ukraine has asked us for. 1/

Polish Prime Minister Mateusz Morawiecki says Warsaw can send Leopard 2 tanks to Ukraine even without Germany’s approval, as long as it is part of an international coalition.

“Consent is of secondary importance here, we will either obtain this consent quickly, or we will do what is needed ourselves.” Morawiecki said late Wednesday.

The most important thing is for Germany, but not only Germany … to offer their modern tanks, their modern heavy weapons, because Ukraine’s ability to defend its freedom may depend on that.

Finland has also said it will provide Leopards if Berlin lifts its veto on delivery of German-made tanks to Kyiv.

While Ukraine’s allies consider the provision of battle tanks to Kyiv, the US is including about 100 Stryker armored vehicles in a forthcoming $2.5 billion package of military aid.

“People familiar with the matter” said the package is scheduled to be announced on Friday, when Defense Ministers of about 50 countries meet at the Ramstein Air Base in Germany, although the plan may change.

The Stryker is an eight-wheeled armored fighting vehicle with high mobility. Some models have anti-tank guided missiles.

“Military support to Ukraine is absolutely crucial,” said Prime Minister Ulf Kristersson. “Ukraine’s wishes in terms of what they want carries a lot of weight in our decision.”

Sincerely grateful to the Government of Sweden & @SwedishPM for the new military assistance package to 🇺🇦. CV90 IFVs, Archer self-propelled howitzers & NLAW ATGMs are powerful weapons that 🇺🇦 army needs to liberate our land from the Russian invader. Together to a common victory!

In his nightly address to the nation, Ukraine President Volodymyr Zelenskiy thanked those involved in the 9-hour rescue operation after Wednesday’s helicopter crash in Brovary near Kyiv.

Another 25 people were injured, including 11 children. Ten adults and six children are still hospitalized.
Tweet

Another day of this terrible war, these tragedies that our people are going through, is coming to an end. A terrible day that we must go through, must endure. And we will endure.

Eleven people are still missing from Saturday’s Russian missile strike on a Dnipro apartment block that killed at least 45, including six children.

Dnipro Deputy Mayor Mykhailo Lysenko said Wednesday that “municipal workers are still finding remains of bodies while sorting through the debris”. Remains are being handed over to forensic experts for DNA testing.

A “government source” says Germany’s Scholz Government will send Leopard 2 battle tanks to Ukraine if the US agrees to supply Abrams tanks.

Speaking at the World Economic Forum in Davos, Switzerland on Wednesday, Scholz evaded questions about whether Germany would finally deliver the Leopard 2s or at least allow third countries to supply their German-made tanks to Kyiv.

White House spokesperson Karine Jean-Pierre said that President Joe Biden “believes that each country should make their own sovereign decisions on what steps of security assistance and what kinds of equipment they are able to provide Ukraine”.

Ukraine President Volodymyr Zelenskiy, speaking to the World Economic Forum in Davos, Switzerland, called for decisive action: “There are moments when there is no need to hesitate. When people say, ‘I’ll give you tanks if someone else does.'”

ORIGINAL ENTRY: US officials are signalling the Biden Administration’s support of Ukrainian attacks on Crimea, occupied by Russia since 2014.

“Several” officials told The New York Times that the administration is finally concluding that Ukrainian forces need the power to strike the peninsula between the Black Sea and the Sea of Azov.

Publicly the Administration says there is no change in position. National Security Council spokeswoman Adrienne Watson asserted, “We have said throughout the war that Crimea is Ukraine, and Ukraine has the right to defend themselves and their sovereign territory in their internationally recognized borders.”

But privately security and military officials had questioned the value of Ukraine focusing attacks on Crimea rather than elsewhere.

The Administration shift is prompted by the belief that a threat to Russia’s control of Crimea would bolster the Ukrainian position in any future negotiations. Officials also assess that the risk of Russian retaliation with a tactical nuclear weapon has receded, although it still remains.

Last summer the US provided Ukraine with the High Mobility Artillery Rocket Systems (HIMARS) which have helped change the course of the war in southern Ukraine, next to Crimea, as well as in the northeast.

Earlier this month the US committed to supply of Bradley Infantry Fighting Vehicles, and the Administration is considering the provision of Abrams heavy battle tanks.

But the officials say President Joe Biden is still against any supply of long-range missile systems which could attack Russian installations in Crimea.

In a virtual address, Ukraine President Volodymyr Zelenskiy told the World Economic Forum in Davos, Switzerland on Thursday, “Our objective is to liberate all of our territories. Crimea is our land, our territory, our sea, and our mountains. Give us your weapons and we will bring our land back.”

Stepping Up Attacks on the Occupiers

Since last summer Ukrainian forces have been carrying out operations to degrade the Russian position in Crimea.

In August explosions at the Saky airbase — from a sabotage operation on the ground, drone strikes, or both — destroyed at least eight Russian warplanes, half of the airpower of Moscow’s Black Sea Fleet.

Days later, attacks detonated an ammunition depot and damaged a railway and a transformer substation. Drones struck the headquarters of the Russian Navy in Sevastopol.

In October, Ukraine landed its heaviest blow to date, severely damaging the Kerch Bridge between Crimea and Krasnodar in Russia. The bridge was a treasured project of Vladimir Putin, opened by the Russian leader in 2018 to mark the seizure of Crimea. The strike also dented Putin’s September 21 declaration of “annexations” of four other regions of Ukraine.

Officially Ukraine’s Zelenskiy Government and the military do not claim responsibility for the operations, relieving any pressure on Washington to declare its position.

But this week high-level US and Ukrainian commanders will hold a high-level planning meeting in Germany to game out offensive planning, said a “senior US official”. The discussion seeks to align Ukraine’s battle plans with weapons and supplies from NATO allies.