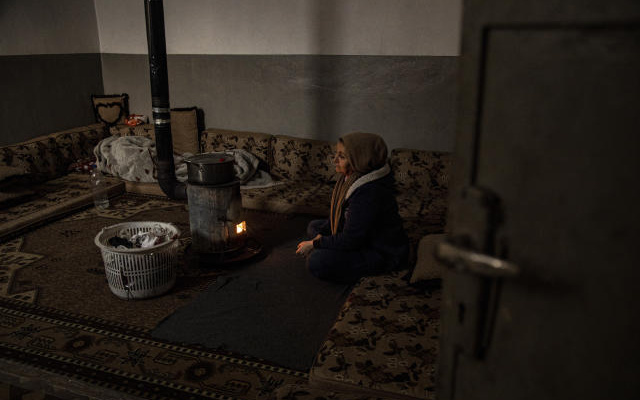 The UN’s Office for the Coordination of Humanitarian Affairs, updating on the situation in opposition-held northwest Syria, says 3.3 million of an estimated 4.6 million residents are food insecure.

Of the population, 2.9 million are internally displaced.

Sarah Dadouch of The Washington Post adds detail on the struggle of those in Assad regime areas to survive amid fuel shortages.

He says of Homs, Syria’s third-largest city, “It’s a city of ghosts.”

People are burning slippers, nylon, plastic bottles for heat. It makes me want to cry. You can see people on the street, gathering plastic from garbage bags, even the garbage bags themselves, and burning them.

The Assad regime’s Oil Minister Bassam Tohme is blaming delayed shipments from “friends” — Iran, which has propped up the regime with an estimated $30 billion of discounted oil and lines of credit during Syria’s 12-year conflict.

Some people, if they can afford it, can find relief with black-market fuel from neighboring Lebanon. Drivers in cars with Lebanese license plates siphon gasoline from their tanks and sell it to those driving into Syria.

In regime areas, taxi drivers — who still receive some subsidized gasoline — sell it on street corners. Shops hoard containers under the counter and sell it to customers who know how to request a purchase. Facebook groups, set up to find open gas stations, feature offers to sell gasoline in old sunflower oil bottles and water jugs.

Even pro-regime outlets are expressing criticism. Lebanon’s Al-Mayadeen headlines, “Total Paralysis Due to Lack of Fuel….No Life in the Streets of Syrian Capital.”

Citing “people familiar with the matter”, The Wall Street Journal reports that Iran has doubled the price of oil supplied to the Assad regime.

Throughout Syria’s 12-year conflict, Tehran has propped up the regime with discounted oil and lines of credit worth an estimated $30 billion.

However, the sources said that Iran — facing its own economic and financial crisis amid nationwide protests — has raised the price for the regime to about $70 per barrel.

Iran is also discontinuing credit and insisting on payment in advance, further challenging a regime that depends on Tehran for half its oil supply.

The regime usually receives at least two shipments of oil a month from Iran, but the next Iranian tanker isn’t due to leave for Syria until early March.

ORIGINAL ENTRY, JAN 16: As Syrians face soaring inflation and fuel shortages after almost 12 years of conflict, the Assad regime is sharply cutting expenditure and subsidies in its budget for 2023.

The draft budget, approved by Bashar al-Assad last month, is 16.5 trillion Syrian pounds — about $3.6 billion at the official exchange rate.

To keep pace with Syria’s inflation rate — estimated at 300% to 400% — the budget would have to be tripled.

The impact of the reduction will be felt by the 90% of the Syrian population who live below the poverty line. The budget provides 4.9 trillion Syrian pounds for subsidies on essentials such as flour and wheat — an absolute reduction of 12% and almost 40% in real terms. Only 30% of fuel needs will now be covered.

Regime Denial Amid The Struggles for Heat

Having endured fuel shortages for years, residents in regime-controlled areas are further the further shock amid the Syrian winter.

Many are struggling to afford even mazot, the low-quality diesel fuel used for heating. Some are turning to wood, but as Abu Muhammad — an owner of a mobile phone store — says, the rising price “might make this solution difficult too“.

In early January the regime — having suspended work at some departments and many industrial sectors — raised the price of gasoline for the second time in less than a month.

Prime Minister Hussein Arnous promised that “recent bottlenecks in oil derivatives” were headed for “relief” due to the “frequent arrival of supplies under a defined program to better provide for demand”. But almost no subsidized fuel is available through the regime’s “smart card” system.

The average monthly cost of living for a family of five in Syria is more than SYP 3.5 million ($555). That compares with the average salary of a public sector employee of around SYP 100,000 ($16.50) per month. About 40% of families rely on remittances sent by relatives from abroad.

Publicly the regime is in denial. Prime Minister Arnous insisted that the effect of soaring fuel prices on the cost of other products is “very minor, and within the acceptable bounds for the general conditions”.

Some schools and universities are in effect “closed”, with the regime announcing a series of week-long holidays. Employees are no longer required to come into government offices.

But on Sunday, Arnous briefed the People’s Assembly without mentioning the specific difficulties. Instead, he hailed “the government’s overall work and what has been carried out in all economic and service sectors”, and then issued a word salad of reassurance.

A number of economic, monetary and administrative measures and decisions have been taken to control the exchange market, according to available potentials….

The government continues hard work to tackle problems and achieve clear results on the economic and service levels to meet the needs and requirements of citizens in various fields and sectors.

Meanwhile, in Inkhil in southern Syria, a resident notes that the local council is “asking people to donate money to provide fuel to operate a garbage truck”.