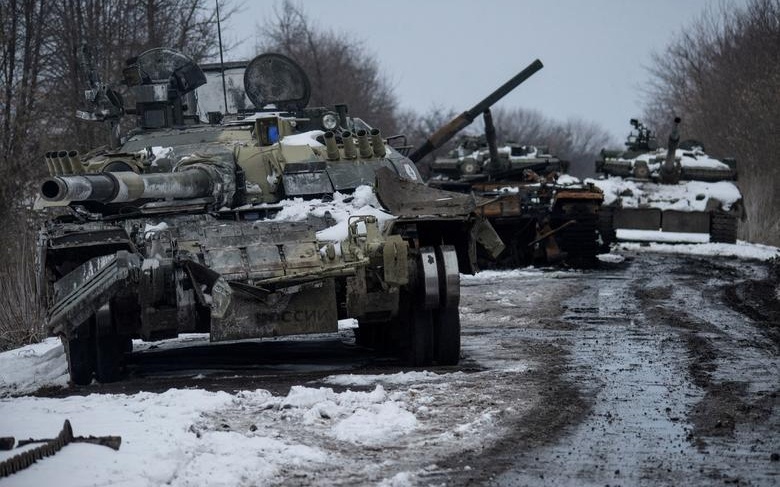 Analysts at Russian oil producers anticipate that Russia’s oil output could fall by 500,000 to 1 million barrels per day in early 2023, following a European Union ban on seaborne imports from Monday.

The analysts requested anonymity, but Alexei Kokin of Otkritie brokerage broadly agreed with their assessment, saying that he “does not think they will be able to divert” the seaborne output from Europe to other markets.

Before its invasion on 24 February, Russia exported around 8 million barrels per day of oil and oil products.

The Ukrainian Government is drafting a law banning churches affiliated with Russia, aiming to prevent Moscow being able to “weaken Ukraine from within”.

President Volodymyr Zelenskiy said in his nightly address to the nation on Thursday:

We have to create conditions where no actors dependent on the aggressor state will have an opportunity to manipulate Ukrainians and weaken Ukraine from within. We will never allow anyone to build an empire inside the Ukrainian soul.

The National Security and Defence Council of Ukraine called for the law following a series of raids on churches which the Government says could be taking orders from Moscow. Investigations have been ordered into suspected “subversive activities of Russian special services in the religious environment of Ukraine”.

A spokesman for the church, Metropolitan Kliment, said it “has always acted within the framework of Ukrainian law. Therefore, the state of Ukraine does not have any legal grounds to put pressure on or repress our believers.”

The CEO of arms manufacturer Raytheon Technologies, Greg Hayes, says Ukraine could have additional advanced US air defense systems within 3 to 6 months.

The Pentagon announced on Thursday that it has commissioned Raytheon to manufacture six National Advanced Surface-to-Air Missile Systems, at a cost of $1.2 billion, to supplement two sent to Kyiv last month.

The manufacture of the systems normally takes two years. But Hayes said the US might shift NASAMS from the Middle East to Ukraine, and replenish the stock of Middle Eastern countries with new NASAMS over the next 24 months.

The Ukraine General Staff says some Russian personnel are withdrawing from occupied settlements in the Zaporizhzhia region in southern Ukraine.

Some troops have left Polohy, Myhailivka, and Inzhenerne. Polohy lies at a critical road junction. It’s loss would jeopardise the defense of the city of Tokmak, 120 km (75 miles) south of Zaporizhzhia city.

The assessment follows a similar claim on Thursday that some Russian troops, mainly newly-mobilised men, have pulled out of settlements in the neighboring Kherson region. The soldiers have left settlements on the east bank of the Dnipro River, opposite recently-liberated Kherson city.

The US-based Institute for the Study of War assesses that Russia may be withdrawing personnel from positions close to the front line to reduce the impact of escalating Ukrainian strikes.

Despite any withdrawal, Russian forces continue to shell Ukrainian-held areas of the Zaporizhzhia and Kherson regions.

Three people were killed and seven wounded in Kherson over 24 hours. Governor Yaroslav Yanushevych wrote of 42 attacks on Kherson city and other areas.

The mayor of Zaporizhzhia city, Anatoly Kurtev, wrote on Telegram early Friday, “As a result of the enemy attack, the building of the infrastructure object is on fire. The blast wave blew out windows in nearby houses.”

Ukraine Presidential advisor Mykhailo Podolyak says up to 13,000 Ukrainian troops have been killed during Russia’s invasion.

The statement is the first by the Ukrainian Government of likely casualties. In late August, the head of the armed forces said almost 9,000 troops had died.

The Ukraine military says Russia has lost more than 100,000 troops since the invasion on February 24.

The analysis details that, with a 12:1 advantage over Ukrainian forces near Kyiv, the Russians sought to invade all of the country over 10 days. Drawing the Ukrainians away from the capital, the assault would soon overrun Kyiv and key cities, leading to full annexation by August 2022.