Ukraine War, Day 279: US and NATO to Announce More Aid to Kyiv 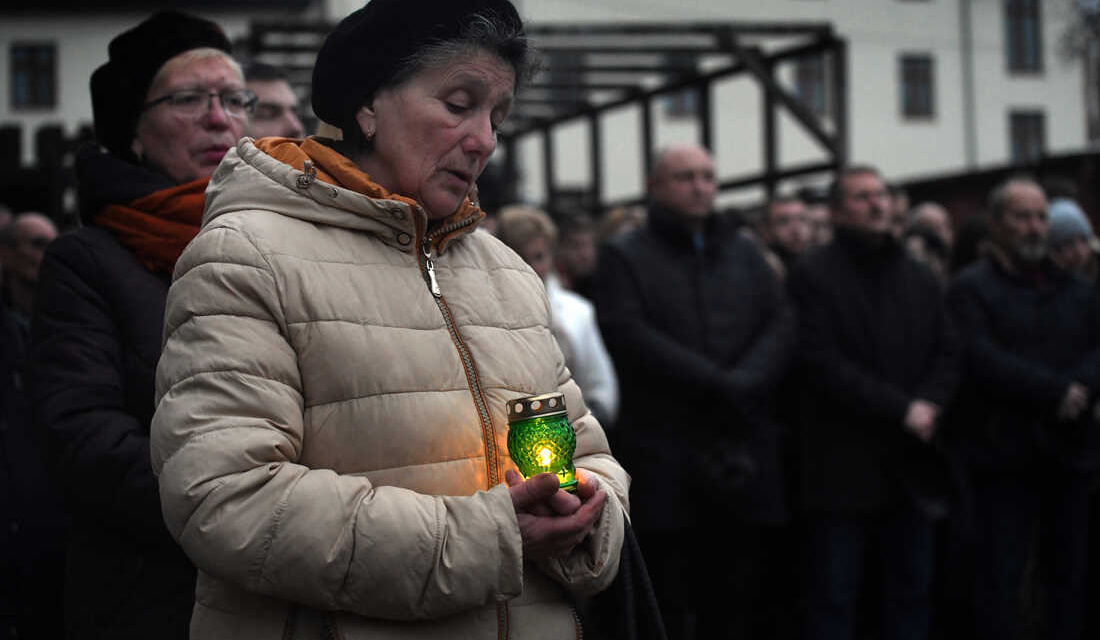 Residents hold a remembrance ceremony during the 90th anniversary of the Soviet-instigated famine, the Holodomor, at a Museum of the Stryiska Death Camp Prison in Drohobych, Ukraine, November 26, 2022 (Carol Guzy/NPR)

The G7 nations — US, France, Italy, Germany, Japan, Australia, and UK — have agreed to establish a network for coordination of investigations into war crimes.

The announcement was made after a meeting of G7 Justice Ministers in Berlin. Special prosecutors of the International Criminal Court, Germany’s Federal Prosecutor, and Ukraine Justice Minister Denys Maliuska also attended.

German Justice Minister Marco Buschmann said, “Judicial examination of the atrocities committed in Ukraine will take years, perhaps even decades. But we will be well prepared and we will persist for as long as it takes.”

The network will have a central contact point in each state for the prosecution of international crimes.

Ukrainian authorities have detained a deputy mayor of the recently-liberated Kherson city in southern Ukraine.

Prosecutors said the suspect, who was not named, collaborated with Russian proxy administrators after Moscow’s forces overran the city in March.

While understanding that Russia’s representatives illegally occupied the oblast, the suspect helped establish communal and housing services for the occupation administration, as well as illegally established law enforcement agencies.

The official faces 10 to 12 years in prison if convicted.

State energy provider Ukrenergo said there is still a 30% shortage of electricity as of 11 a.m.

The figure is an increase on Monday’s 25% because of emergency shutdown of units at several power plants and increased consumption amid worsening weather.

The latest Russian attacks across the Donetsk region in eastern Ukraine have killed one person and injured three in Lyman, liberated by Ukrainian troops in September.

The founder of Russia’s Wagner Group mercenaries, Yevgeny Prigozhin, has finally confirmed that a Zambian national was killed in Ukraine on the battlefield alongside Wagner’s fighters.

Zambia demanded an urgent explanation from Moscow two weeks ago over the death of Lemekhani Nathan Nyirenda, 23.

Nyirenda was serving a 9-year sentence in a prison outside Moscow for a drug offense. His father said he was “conscripted” to fight.

Prigozhin said he “remembered this guy well”, meeting Nyirenda on his recruitment drive across Russia’s prisons.

Ukraine may expel all Russian citizens if Crimea, occupied by Russia’s forces in 2014, is liberated.

According to Ukrainian legislation, all foreigners who entered the peninsula after 2014 not through Ukrainian checkpoints or through them, but violated the terms of stay, live in the territory of Crimea illegally.

The decision is simple and does not contradict international law: the population that came illegally to the territory of the peninsula must leave the Autonomous Republic of Crimea and Sevastopol through voluntary departure or forced expulsion.

Tasheva said the Government does not recognise passports that Russia “forcibly” distributed to Crimean residents, “All of them were and remain citizens of Ukraine.”

Russia has cancelled “New START” talks with the US on nuclear weapons reduction.

The discussions were scheduled to begin today in the Egyptian capital Cairo, but Moscow announced on Monday that it would not attend.

Deputy Foreign Minister Sergey Ryabkov insisted on Tuesday that Moscow had “no other choice”.

He indicated the Kremlin ordered the cancellation: “The decision was made at the political level.”

A commentator on Russian State TV notes Ukraine’s recovery from Moscow’s missile strikes, leading to an argument with others who insist this can’t be true.

Lindsey Hilsum of the UK’s Channel 4 reports from the frontline in Ukraine:

We were in the trenches with Ukrainian soldiers – and a kitten called Olenka. ‘If we win my children will live in freedom’ says Vadym. Then we came under fire… pic.twitter.com/Zz7wimU7VZ

The UN Human Rights Commission has confirmed the killing of at least 6,655 civilians and wounding of at least 10,368 during Russia’s invasion of Ukraine.

The Commission emphasizes that actual figures are likely to be far higher given lack of information from frontlines and Russian-occupied territory.

The BTGs have been a major element of Russian military doctrine in the past decade, with battalions integrated with armor, reconnaissance, and artillery.

However, since August the use of BTGs appears to have been halted. The UK analysts summarize, “BTGs’ relatively small allocation of combat infantry has often proved insufficient. Decentralised distribution of artillery has not allowed Russia to fully leverage its advantage in numbers of guns; and few BTG commanders have been empowered to fully exploit opportunities.”

The wife of a Russian colonel who apparently committed suicide says his death is connected to widespread problems with Vladimir Putin’s mass mobilization.

Col. Vadim Boyko was found in his office with five gunshot wounds on November 16. He was responsible for training and provisions at the Pacific Naval School

In a letter to Putin, Boyko’s wife said her husband tried to repair broken equipment and deal with missing documentation over the mobilization. In reports to superiors, he noted the logistical problems and said newly-mobilized men were not ready to go to the frontlines in Ukraine.

However, the head of the institution ignored these problems, did not provide any help, despite the fact that he saw my husband’s depressed moral and psychological state.

On November 14, a commission began investigation complaints by mobilized men. The inspectors supposedly threatened Boyko with a fine of 100 million rubles ($1.63 million) over damage to state property.

“This was the last straw for an officer who devoted his entire adult life to serving in the army, for whom courage, dignity, justice and honor were not just words,” Boyko’s wife wrote.

Investigators have confirmed the death of writer Volodymyr Vakulenko, abducted by Russian forces during their occupation of the Kharkiv region in northeast Ukraine.

A DNA examination established Vakulenko’s identity. His body had been among those found in a mass burial site when the area around Izyum was liberated in September.

Vakulenko was a prominent editor and organizer of literary events and festivals as well as an author. His awardsincluded the Oles Ulyanenko international literary prize, winner of the All-Ukrainian Les Martovych competition and of the Coronation of Words international contest,and the Silver Trident honor for the 20th anniversary of the independence of Ukraine.

In his nightly address to the nation, Ukraine President Volodymyr Zelenskiy has noted the ongoing Russian shelling of liberated areas of the Kherson region in southern Ukraine.

Ukraine’s advance reclaimed part of the region, including Kherson city, earlier this month. However, Russian forces have re-established lines east bank of the Dnipro River and are bombarding the other side daily.

Since Kherson city was liberated on November 9, at least 32 civilians have been killed by the Russian attacks.

In just one week, the enemy fired 258 times on 30 settlements of Kherson region. The Russian army also damaged the pumping station that provided water to Mykolaiv….

They are capable of nothing but destruction. This is all they leave behind. And what they are doing now against Ukraine is their attempt to take revenge. To take revenge for the fact that Ukrainians have repeatedly defended themselves from them.

Russia’s missile strikes will not stop Kyiv from putting up Christmas trees throughout the capital.

“No one is going to cancel the New Year and Christmas, and the atmosphere of the New Year should be there,” said Kyiv Mayor Vitaly Klitschko. “We cannot allow Putin to steal our Christmas.”

However, to conserve electricity the trees will be without illuminations and garlands.

“There will be the New Year’s-Christmas tree and it will be the most energy-responsible, but still festive for all of us,” said Sergey Kovalenko of Kyiv’s energy provider YASNO.

There will also be no mass gatherings or concerts.

ORIGINAL ENTRY: The US is expected to announce more financial and energy assistance to Ukraine on Tuesday.

NATO foreign ministers will also discuss aid in a meeting in the Romanian capital Bucharest.

Senior US officials prompted the media that the “substantial” package will be announced tonight. They gave no amount; however, $1.1 billion in energy spending has been set aside in the American budget to help Ukraine and neighboring Moldova as they cope with the damage of Russian missile strikes.

One US official emphasized that the package “is not the end” of Washington’s support.

Canadian Foreign Minister Mélanie Joly told The Guardian ahead of the NATO meeting:

Russia isn’t at the negotiation table at all. And so our goal right now is just to reinforce Ukraine’s position on the ground through military aid, intelligence sharing and financial support.

Because when we do that, we’re actually reinforcing their position at the negotiation table. There will be a diplomatic solution eventually. That’s been the case in every single conflict. But we’re not there yet.

Canada committed another C$500m ($373m) in new military aid to Ukraine last week. Joly indicated more energy assistance will be pledged, as countries supply generators and auto-transformers to Ukraine for its “Points of Invincibility”.

With Russia escalating its strikes since October 10, regional and local authorities have implementing scheduled and emergency blackouts while repairs are carried out. However, energy provider Ukrenergo said it is still only able to cover 73% of consumption.

“We need to make sure that Ukrainians are able to get through this difficult winter,” Joly summarized.

[Vladimir Putin] continues trying to make Ukraine a black hole – no light, no electricity, no heating to put the Ukrainians into the darkness, and the cold.

So we have to continue our support providing more material for the Ukrainians to face the winter without electricity.