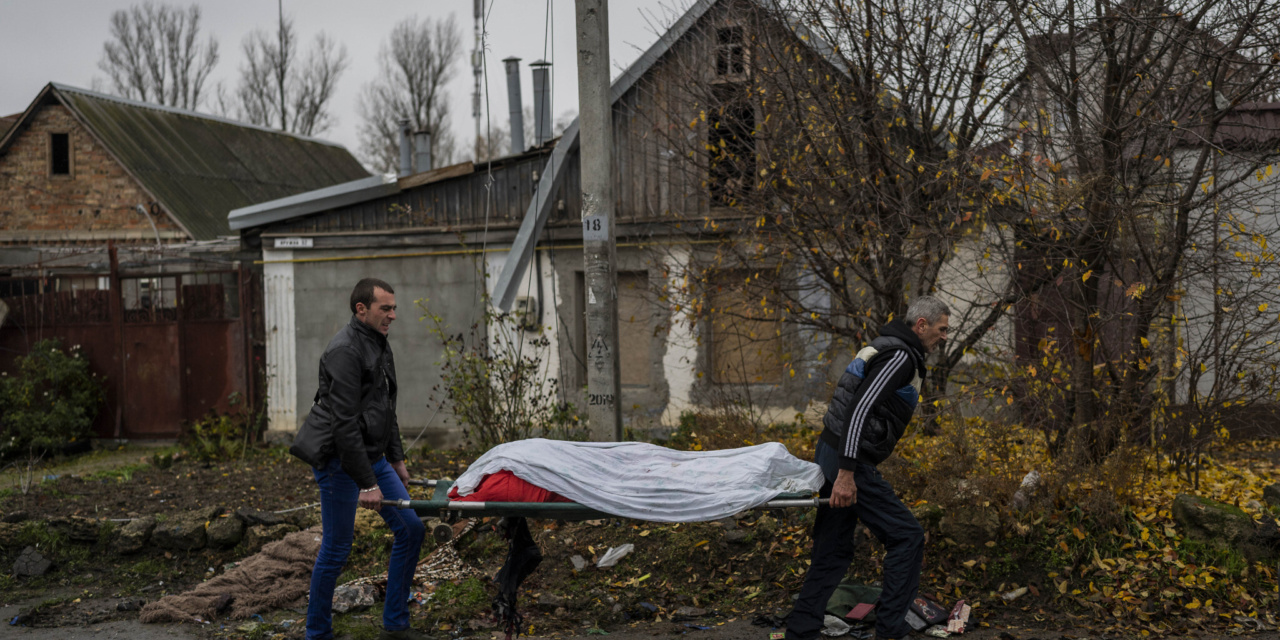 Dramatic footage of Ukrainian troops evacuating an elderly woman by truck, and then on foot after the vehicle is hit by Russian shelling.

This month, @saintjavelin bought a truck for "Donbas Evacuation" which evacuates civilians from frontline towns.

Last night, they sent me a message that the truck was destroyed, and today they showed us what happened.

This truck lasted about 10 days. pic.twitter.com/RECy6KDOKW

Belgium is providing additional support of 37.4 million euros ($38.95 million) to the Ukrainian Government.

De Croo had discussions with Ukraine President Volodymyr Zelenskiy and visited the Kyiv suburbs of Bucha and Borodyanka, where Russian troops carried out mass killings of civilians before withdrawing from the Kyiv region at the end of March.

The latest Russian attacks across the Donetsk region in eastern Ukraine have killed five civilians and injured four.

Three people were killed in Ridkodub, one in Chasiv Yar, and one in Bakhmut.

One person was killed and three wounded in the Kharkiv region in northeast Ukraine.

The administration said repair work on the electricity grid is in its final stage and most Kyiv homes have electricity as of 9 a.m.

State energy grid operator Ukrenergo said about 80% of demand is now being supplied, up from 75% on Saturday.

The URC said the occupation administration in the Luhansk region had conducted medical examinations of 15,000 children between the ages of 2 and 17, declaring that 10,500 must be taken to Russia for “treatment”.

The URC suggested that the proxy officials are using the forced deportation scheme to lure children’s families to Russia and prevent them from returning to Ukraine.

Russian Commissioner for Children’s Rights Maria Lvova-Belova gave further support to the removal of children on Ukraine on Saturday. She posted an excerpt from a documentary film about the children she “adopted” from Mariupol, the port city in southern Ukraine that was overrun in May after 12 weeks of resistance.

In his nightly address to the nation, Ukraine President Volodymyr Zelenskiy gave an update on the energy situation after damage to the electrical grid by Russian missile strikes, including on Wednesday.

Zelenskiy said there are restrictions on the use of electricity for more than 100,000 customers in 14 of Ukraine’s 27 regions, including Kyiv.

He urged ongoing conservation of use, as temperatures drop below freezing and heavy snowfall is expected.

State electricity provider Ukrenergo said Saturday that only 3/4 of consumption is being covered, leading to restrictions and blackouts across the country.

Sergey Kovalenko, chief operating officer of Kyiv energy firm Yasno, said the situation has improved but remains “quite difficult”. He said residents should have at least four hours of power a day.

Once they wanted to destroy us with hunger, now – with darkness and cold.

We cannot be broken.

ORIGINAL ENTRY: Russian shelling has killed 32 civilians in Kherson city since it was liberated by Ukrainian troops on November 9.

Russia’s retreat was a symbolic and strategic defeat for Vladimir Putin’s 9-month invasion. Kherson was among the initial territory seized after February 24. With its liberation, Ukrainian forces cannot only continue their advance across southern Ukraine but also put pressure on Crimea, occupied by Russia since 2014.

However, Russian forces have established a line on the east bank of the Dnipro River across from Kherson. From there, they are shelling daily.

Ukraine police chief Ihor Klymenko announced the toll from shelling on Saturday. The total includes 15 people slain on Friday. Another 35, one of them a child, were injured as several private houses and high-rise buildings were damaged in 17 Russian attacks.

Another seven people were slain and 21 injured in 17 Russian attacks on Thursday.

Klymenko said police were also dealing with the threat of munitions left behind by the Russians, checking 450 hectares (1112 acres) in the Kherson region and removing about 3,500 explosives.

The police chief said the operations had saved “hundreds or even thousands of people’s lives”.

Amid the ongoing Russian attacks, there was some positive news for Kherson residents on Saturday. Electricity was fully restored, even as about 6 million Ukrainians remained without power because of Russian missile strikes on energy infrastructure.

Deputy Prime Minister Iryna Vereshchuk had advised residents to evacuate, but was rebuked by other Ukrainian officials for the statement.

However, some residents have been prompted to leave by the latest Russian attacks. Patients in children’s and psychiatric hospitals have been moved. A line of trucks, vans, and cars, carrying belongings and pets, stretched for more than a kilometer (0.6 mile) out of the city.

“It is sad that we are leaving our home,” said Yevhen Yankov. “Now we are free, but we have to leave, because there is shelling, and there are dead among the population.”

Svitlana Romanivna explained, “We went through real hell. Our neighborhood was burning, it was a nightmare. Everything was in flames.”