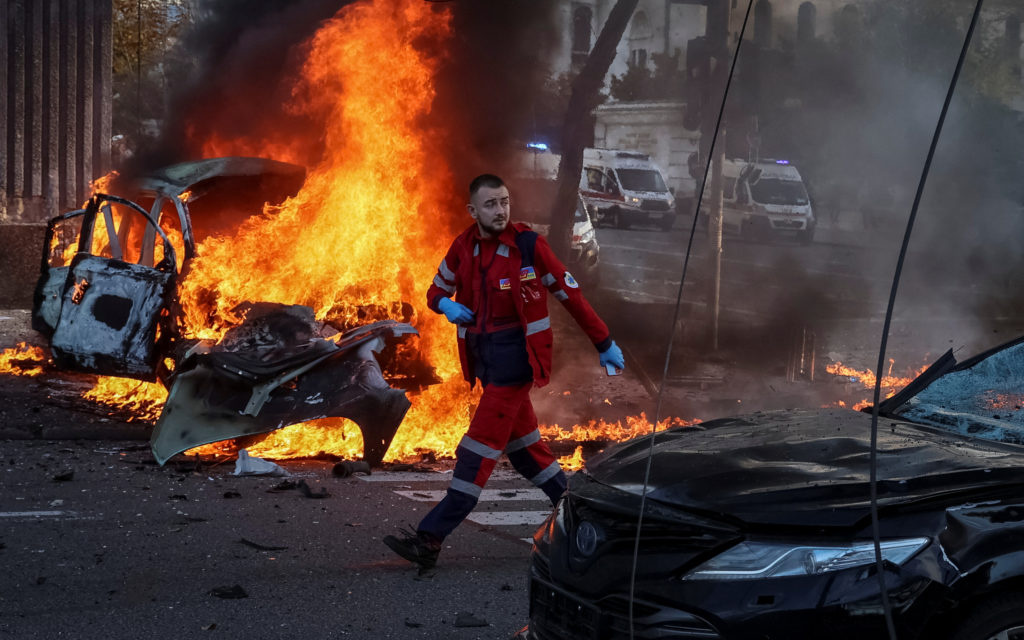 In two sentences, Ukraine President Volodymyr Zelenskiy made the essential juxtaposition: “Today, the European Parliament recognized Russia as a terrorist state….And then Russia proved that all this is true by using 67 missiles against our infrastructure, our energy grid, and ordinary people.”

Wednesday had begun with a Russian missile strike on a maternity ward in a hospital in southern Ukraine, killing a newborn. It was the latest of almost 700 assaults on medical facilities during the nine-month invasion.

Later in the morning, the European Parliament, in a 494-58 vote, designated Russia as a “state sponsor of terrorism”. MEPs cited Russia’s “deliberate physical destruction of civilian infrastructure and mass murder of Ukrainian civilians with the aim of eliminating the Ukrainian people”. They supported the conclusion with Ukraine’s documentation of more than 34,000 war crimes by Russian and Russian proxy troops.

The Parliament urged the European Union’s 27 member states to adopt the designation “with all the negative consequences this implies”.

In the afternoon, the Russians responded with the launch of 70 missiles and five attack drones. Ukraine’s air defense downed 51 of the missiles and all the Iranian-supplied drones; however, those that reached targets knocked out power across the country, already without half of its electricity grid because of waves of Russian assaults since October 10. Three nuclear plants were taken off-line, joining the Russia-occupied Zaporizhzhia Nuclear Power Plant, the largest in Europe.

Ten people were killed across Ukraine. Seven were slain and 36 injured in the Kyiv region alone. Three died in a destroyed two-story residential building — the toll would have been higher had a kindergarten on the lower ground floor not been evacuated when air raid sirens sounded.

Late Wednesday, Zelenskiy summarized the day in an address to the UN: “We cannot be hostage to one international terrorist….When we have the temperature below zero, and scores of millions of people without energy supplies, without heating, without water, this is an obvious crime against humanity.”

On its own, the European Parliament’s designation of the Russian “terrorist state” is symbolic rather than substantive. The MEPs have no authority to add to the international sanctions on Moscow, the investigations into Russian war crimes, or the financial and military support for Ukraine’s resistance.

However, the step is a powerful symbol which adds to substance. For months, the Zelenskiy Government has sought the designation. Now, as Ukraine faces the possibility of a harsh winter and Putin’s attempt to break its people by depriving them of heat and water, Ukrainians have been assured that Europe is watching.

And not just watching. Five European Union countries — Poland, the Czech Republic, Latvia, Lithuania, and Estonia – have already labelled Russia as a state sponsor of terrorism. The Parliamentary Assembly of the Council of Europe, linked to the EU but not part of it, has declared Putin’s regime “a terrorist one”.

Wednesday’s resolution calls on the EU to put in place the “proper legal framework” to add Russia to an official list of terrorist actors. Meanwhile, member states have been prompted to proceed with their own measures.

The extent of additional restrictions on Moscow is still to be determined. EU nation-states are debating the level of the price cap to be imposed on Russian oil, and Hungary — with President Viktor Orbán still a pal of Putin — could be an impediment to expanded sanctions.

However, even the reinforcement of existing measures is a powerful political statement with the isolation of the Kremlin. One of Putin’s many unsuccessful gambles in this invasion was that he could rally support from other countries through propaganda, disinformation, pressure, and bargaining.

That support is now largely confined to “kamikaze” drones from Iran, munitions from North Korea, and the allegiance of Putin’s vassal Belarus. At the G20 summit last week, China’s Xi Jinping further distanced Beijing from the Kremlin’s attacks and India’s Narendra Modi glued himself to the fence with anodyne statements about “diplomacy”.

Meanwhile, there is no sign of international assistance to Ukraine easing. Amid the missile strikes, countries from Sweden to Germany have committed to supply of air defense systems and munitions. On Wednesday, the US announced another $400 million in military aid including weapons, munitions, and air defense equipment. For the first time, the UK is supplying helicopters.

Putin is facing defeat on the battlefield. Since August, Ukrainian counter-offensives have regained territory in the northeast and south, with the liberation of strategic cities such as Izyum, Lyman, and Kherson. Strikes have destroyed or degraded Russia’s bases, ammunition depots, logistics, and supply routes.

Putin’s “annexation” of four Ukraine provinces, two in the east and two in the south, is now in tatters. The question is no longer whether Russia can hold areas it has seized this year, but whether Ukraine will regain territory — from parts of the Donetsk and Luhansk regions in the east to Crimea in the south — occupied by Moscow and its proxies since 2014.

So the Kremlin’s last hope is the winter strikes, even as its missile stocks are being depleted and it relies on Iran for drones. Before spring, it has to break the Ukrainian people — or at least the support for those people from outside Ukraine.

The designation of Russia as “terrorist” won’t stop the missiles. But as Ukrainians repair and recover each time, it is the necessary marker that Putin, the Kremlin, and their allies will not have unrestricted political space for their attacks — and they will not escape accountability when those attacks ultimately fail.