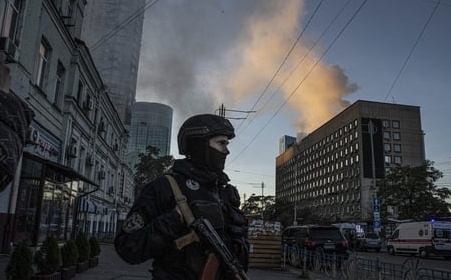 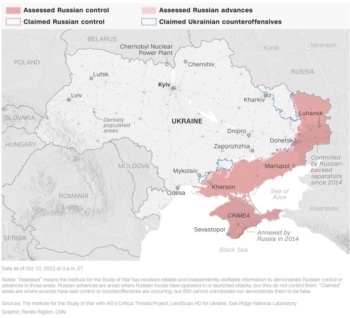 At a meeting the Russian capital, Deputy Defense Minister Alexander Fomin told UN Undersecretary General Martin Griffiths that extension of the deal — due to expire in November — is dependent on the West removing barriers to Russia’s agricultural and fertilizer exports.

Ukraine’s Agriculture Ministry said earlier on Monday that exports in the first 17 days of October were just 2.4% lower than in the same period of 2021.

The European Union has agreed a two-year training mission for 15,000 Ukrainian soldiers and another €500 million ($489 million) for purchases of weapons.

The EU has now pledged €3.1 billion ($3.03 billion) for Ukraine’s military during the Russian invasion.

Iran is responsible for the murders of Ukrainians. Country that oppresses its own people is now giving ru-monsters weapons for mass murders in the heart of Europe. That is what unfinished business and concessions to totalitarianism mean. The case when sanctions are not enough…

Four people have been killed in Russia’s drone attack on a Kyiv residential building this morning, with three people — two of them members of the emergency services — injured and 19 rescued.

Two of the victims were a husband and wife, who was six months pregnant.

A young family died after a Russian attack on Kyiv residential building.

Bohdan and Victoria, 34, were both found dead. It is reported they were expecting their first child in a few months.

So much pain because of TerroRussia.

There were five drone strikes on Kyiv and attacks in the east-central Dnipropetrovsk region and Sumy region in the north.

In Sumy, four people were killed and nine injured.

The tasks for partial mobilization, established on the basis of the presidential decree and the instructions of the Ministry of Defense, have been completed in full. The collection points for the mobilized are closed on 17 October 2022 at 2 pm. Subpoenas sent out during the mobilization process to the place of residence and enterprises cease to be valid.

Putin proclaimed on Friday that the mobilization had succeeded with the call-up of 220,000 men.

The body of a woman has been recovered from rubble after this morning’s Russian attacks on Kyiv.

Mayor Vitali Klitschko said three people have been hospitalized. One person is still trapped under rubble.

In the morning, 28 drones flew in the direction of Kyiv. Thanks to our armed forces and air defence, most of the flying terrorists were shot down. A total of five explosions were heard in Kyiv.

One of them is in a residential building in the Shevchenkiv district. Rescuers continue extinguishing the building’s structures and work on dismantling the debris. Earlier, 18 residents of the building were rescued. Two were under rubble. A dead woman’s body was recently recovered. According to preliminary data, one more person is under the rubble. Search and rescue operations are ongoing.

The Ministry said 26 of the drones were downed in the south and 11 in the north. All were launched from southern Ukraine.

Amazing picture of Iranian Shahed 131/136 suicide drone operated by Russia seconds before hitting Kyiv. via @AFP Note the soldier firing his AK trying to shoot it down. pic.twitter.com/a7l6FZaTSj

Iran’s officials have repeated their lie (see Original Entry) that they have not supplied drones to Russia.

Foreign Ministry spokesperson Nasser Kanaani said, “The published news about Iran providing Russia with drones has political ambitions and it is circulated by western sources. We have not provided weaponry to any side of the countries at war.”

The Ukraine State nuclear agency Energoatom reported the disconnection of the plant at 3:59 am. Backup diesel generators have been started.

We once again appeal to the international community to urgently take measures for the demilitarization of the ZNPP as soon as possible, the withdrawal of all Russian military personnel from the territory of the plant and the city of Enerhodar, and the return of the ZNPP to the full control of Ukraine for the sake of the security of the whole world.

Russia occupied the plant in the early days of its invasion in March. The Kremlin has refused appeals from the UN, the International Atomic Energy Agency, and the international community to withdraw forces and to stop using the site as a military base, including to attack Ukrainian-held territory across the Dnipro River.

Having “annexed” part of the Zaporizhzhia region, Russia has announced its intention to bring the ZNPP under the control of its nuclear authorities. Russian forces recently abducted the director of the plant and another senior official to press for the transfer.

The total losses of the enemy in terms of killed people are approaching 65,000. So many citizens of Russia gave their lives for the possibility of a handful of people in the Kremlin to ignore reality.

The Russians have also struck Dnipro in east-central Ukraine, with a large fire at an energy plant.

A Russian attack on Zaporizhzhia city in southern Ukraine failed to cause damage or casualties. In Mykolaiv, three drones struck tanks of sunflower oil at a terminal in the port city, setting it on fire.

Air defenses in Odesa in southern Ukraine shot down six kamikaze drones. A Kh-59 missile damaged infrastructure, but there were no casualties.

Two people are trapped under rubble after this morning’s Russian kamikaze drone attacks on Kyiv.

Mayor Vitali Klitschko said 18 people have been rescued from one of the damaged residential buildings in the Shevchenko district.

All night and all morning, the enemy terrorizes the civilian population. Kamikaze drones and missiles are attacking all of Ukraine….

The enemy can attack our cities, but it won’t be able to break us. The occupiers will get only fair punishment and condemnation of future generations. And we will get victory.

Rocket is more like a whistle. If we are talking about the drones, imagine some huge 200kg motorcycle flying over your building. It is really freaking scary.

The assault with the Iranian-made Shahed-136 drones began between 6:35 and 6:58 am, with a second wave about 8:15. They again landed in the Shevchenko district in the center of the city, damaging residential buildings near the main railway station.

The capital was attacked by kamikaze drones. We need more air defense systems and as soon as possible. We have no time for slow actions. More weapons to defend the sky and destroy the enemy.

He pointed to the renewed attacks as a sign of Moscow’s weakness, following the success of Ukrainian counter-offensives and the failure of Vladimir Putin’s “partial mobilization”.

“The Russians think that this will help them but these actions look more like agony,” wrote Yermak.

Presidential adviser Anton Gerashchenko said the Russians were again trying to strike energy infrastructure to deprive people of electricity, heating, and water. He said “some of the drones were taken down by our air defense”.

Stung by the damage to his pet project, the Kerch Bridge between Russian-occupied Crimea and southwest Russia, Putin ordered an intense missile and drone assault last Monday. Almost 90 missiles and about two dozen drones were launched. While 60% of the drones were intercepted by air defenses, 19 people were slain, including six in Kyiv.

The attacks continued through the week. However, they failed to break Ukraine’s infrastructure.

Prime Minister Denys Shmyhal noted on Sunday that the efforts of maintenance workers, restoring electricity to about 4,000 settlements, and voluntary reduction of consumption by 10% had maintained energy stability. He summarized, “The aggressor sought to intimidate Ukrainians and paralyse the state’s energy industry. He did not achieve his goal.”

A very close footage of the Russian attack on the center of Kyiv pic.twitter.com/lnKQ56z2Xm

Lies From Putin and Tehran

With Russia facing setbacks on the battlefield and lacking effective drones, Iran began supplying hundreds of Shahed-136s this summer. The Russians first used the weapons in September, but with limited effect.

The Shahed-136s can remain airborne for several hours and circle over potential targets. However, they are vulnerable to air defenses as they hover. Oleg Katkov of Ukraine’s Defense Express explains:

Since this equipment is assembled from low-quality parts, the reliability will be low. That is why the tactics of using these UAVs [unmanned aerial vehicles] involves their use in a so-called swarm. In other words, five to six, or even more, kamikaze drones are launched at one target, assuming that a few of them will fulfil their task.

Vladimir Putin said on Saturday, at a summit with regional leaders in Kazakhstan, that strikes had destroyed 22 out of 29 targets in Ukraine and Russia was “getting” the remaining seven.

“There’s no need for massive strikes. We now have other tasks,” he insisted.

Iran’s Foreign Minister Hossein Amir-Abdollahian also lied on Saturday, telling the European Union’s Josep Borrell that “the Islamic Republic of Iran has not and will not provide any weapon to be used in the war in Ukraine”.

Claims are circulating on Ukrainian and Russian Telegram channels that Russia has purchased Iranian Arash-2 drones, which are purportedly faster and more destructive than the Shahed-136s. US intelligence agencies assess that Iran is preparing a first shipment of Fateh-110 and Zolfaghar short-range ballistic missiles for the Russians.

In a meeting in Luxembourg on Monday, EU foreign ministers will consider sanctions on Tehran over the supply of the drones.