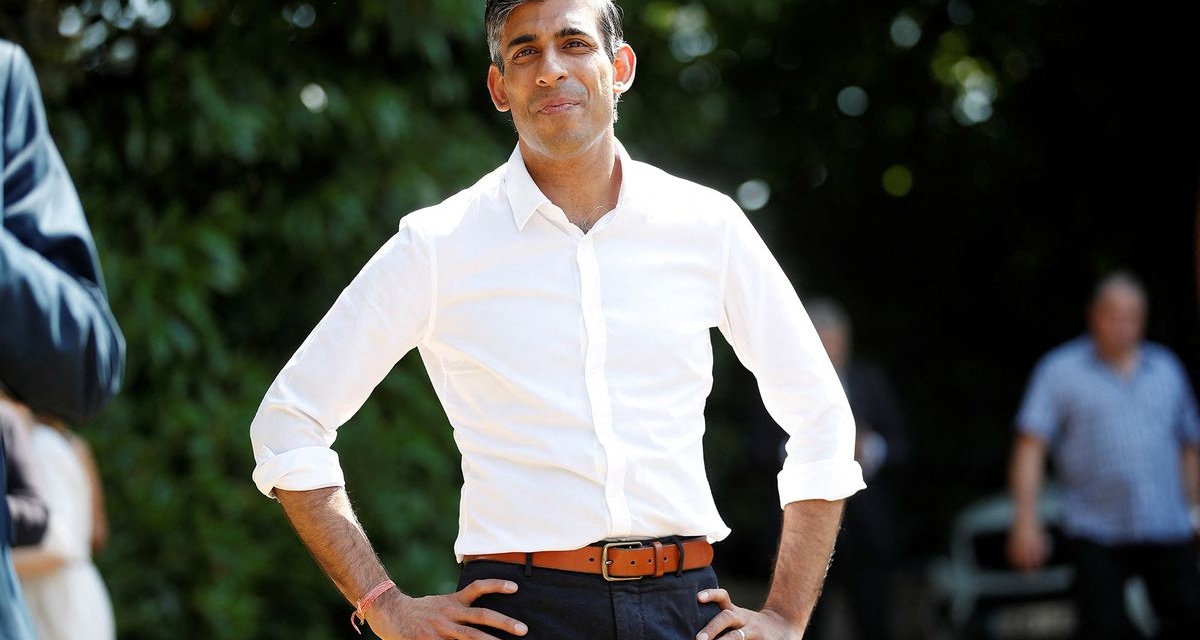 Rishi Sunak in Tunbridge Wells, England, July 29, 2022: “We inherited a bunch of formulas from the Labour Party that shoved all the funding into deprived urban areas and that needed to be undone. I started the work of undoing that.”

The leading clowns have left, the tent is on fire, and the animals are running amok.

But the show must go on. So a new ringmaster, the third in less than two months, steps up.

All of this will make headlines — while the tent continues to burn.

The immediate context for this latest show is another record holder: Liz Truss, whose stay of 44 days in 10 Downing Street is the shortest in British history.

The Truss Government’s distinction was to blow itself up, threatening to take the country with it, with Chancellor Kwasi Kwarteng’s quasi-budget on September 29. Having been in office only 28 days — if you deduct the break for Queen Elizabeth II’s death and funeral — Truss and her collaborators thought an unfunded mega-cut of taxes, with no scrutiny from the Office of Budget Responsibility, made for good politics.

Economic reality burst that brain-bubble within hours. The pound sank; interest rates and bond yields soared, with the prospect of trebling by year’s end; pension funds tottered on the brink of insolvency. Only the Bank of England’s £65 billion intervention on the bond market prevented an implosion that would have made the 1970s Winter of Discontent look like a sunny summer morning.

From that moment, Truss was gone. She sacrificed Kwarteng but, apparently oblivious to her delusions of competence, stood and then sat robotic in the House of Commons as most of her Conservative colleagues realized what they had wrought.

See also EA on India Ahead and CNBC 18: The Brexit Elephant in Rishi Sunak’s UK Circus

Thus, after the leading clown Boris Johnson briefly threatened a return to the circus, Sunak was welcomed as the savior of party and nation — less than two months after the Conservative membership had soundly rejected the idea of the first non-white, Indian-descent, Hindu Prime Minister.

The Rampaging Elephant in the Ring

But the fundamental context is beyond Truss, beyond Johnson, and the assorted hangers-on who hope the next calamity could thrust them into the spotlight.

The rampaging elephant in this circus is Brexit.

In his speech outside Number 10, Sunak repeated the cover-up, “It’s all because of the pandemic, all because of Ukraine.” Not once did the former Chancellor of the Exchequer refer to the domestic economic situation.

Only six days later, the Economic and Social Research Institute confirmed that the UK’s goods trade to the European Union had declined 16% because of Brexit. The EU’s trade to the UK is down 20%.

That is a loss of about £40 billion in exports to what is by far the UK’s largest market. The decline is compounded, politically and economically, by the customs line between Great Britain and Northern Ireland. Significantly, while British exports to Ireland have fallen sharply, Irish trade with the North is surging.

Brexit’s corrosion is not just on revenues but on public services. With the barriers to employment of EU nationals, labor shortages are spreading. Vacancies in the health and social care system reached 300,000 in September. Social care reached a record high of almost 11% unfilled positions, and there were almost 47,000 nursing, midwifery, and health visitor vacancies in the National Health Service in England alone.

Sunak is bright enough to realize Brexit’s damage. But he does not admit it, amid the diversionary spectacle of “Can Rishi Unite The Conservative Party?”.

Instead, an audacious moment after acknowledging “economic crisis”, he proclaimed “an economy that embraces the opportunities of Brexit” — presumably the same possibilities Brexit Opportunities Minister Jacob Rees-Mogg was tasked to find for months.

There are no opportunities from Brexit, unless you put them in the same category as the opportunities for passengers after the Titanic hit the iceberg.

Liz Truss’s “Growth, Growth, Growth” was the plaintive scream for her disaster that exposed reality. So the most important code in Sunak’s statement were the words “difficult decisions to come”.

Despite rolling back some of the Truss-Kwarteng tax cuts, there is still an estimated £40 billion black hole in the Government’s budget. There are three ways to fill that: increased borrowing, which could again rattle markets and send interest rates; increased taxes, which will be unpalatable to the riven Tories; and deep cuts to public services.

Sunak’s “difficult decisions” point to the third — an Austerity 2.0 after the initial version more than a decade ago — as he feigned empathy with those who are worth far less than £800 million, “I understand how difficult this moment is….I fully appreciate how hard things are.”

He is delaying the hammer blow. The Government’s “fiscal statement”, moved up to Halloween amid the turmoil over the quasi-budget, has been pushed back to November 17 — ostensibly because Sunak wants to review options, more likely because he and his advisors are trying to craft a palatable presentation.

But the blow will come. As a wise man once wrote, “It’s a sad, sad situation. And it’s getting more and more absurd.”

I’m sure that you know the next lines. For though the leading clowns have left, the circus tent is still on fire. And there is no possibility, in Rishi Sunak’s Brexit Britain, that it will be extinguished.