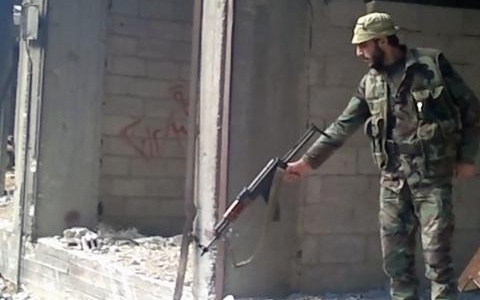 Maj. Amjad Yousef fires at civilians during mass killing in Tadamon, Syria, in 2013

Maj. Ahmad Yousef, who oversaw the mass killing of civilians in Tadamon, Syria in 2013, is still operating from a military base outside Damascus —- and is accused of directing up to a dozen more massacres.

The Tadamon mass killing was documented by academics and publicized by The Guardian earlier this year.

Yousef shot and killed dozens of people across a death pit in Tadamon, a Damascus suburb.

A former colleague said Yousef admitted in a phone call with a mutual friend, “Yes I did it. That is what I had to do at the time.’ No one was shocked we knew him. And we know the regime.”

German investigators say they have identified an associate of Yousef’s, now living in Germany, and are preparing a case against the former intelligence officer.

The revelation of the mass killing rattled the Assad regime, which tried to ease pressure by freeing almost 100 long-term detainees. Some had been imprisoned for more than a decade.

But Yousef continues to oversee operations despite his war crimes. The former colleague said the major was a feared presence in Tadamon for the past decade. He seized women from the streets; many of were never seen again.

“I saw him take women from a bread queue one morning. They were innocent. They had done nothing. They were either raped, or killed. Nothing less,” says the source.

He added that up to a dozen more massacres were carried out in Tadamon: “All of the people were Sunnis. This was sectarian cleansing. Nothing else. It was Alawites eliminating Sunnis.”

The toll of the killings by Yousef’s Branch 227 could be as high as 350 civilians.

France’s counter-terrorism prosecutor’s office may open an investigation after receiving videos of the killings. A spokesperson said:

The alleged actions are likely to constitute the most serious international crimes, specifically crimes against humanity and war crimes. The fight against impunity is a matter of justice for the victims. It is also an essential prerequisite for building a lasting peace in Syria.

After a decade of crimes against the Syrian people, France remains committed to ensuring that those responsible are brought to justice.