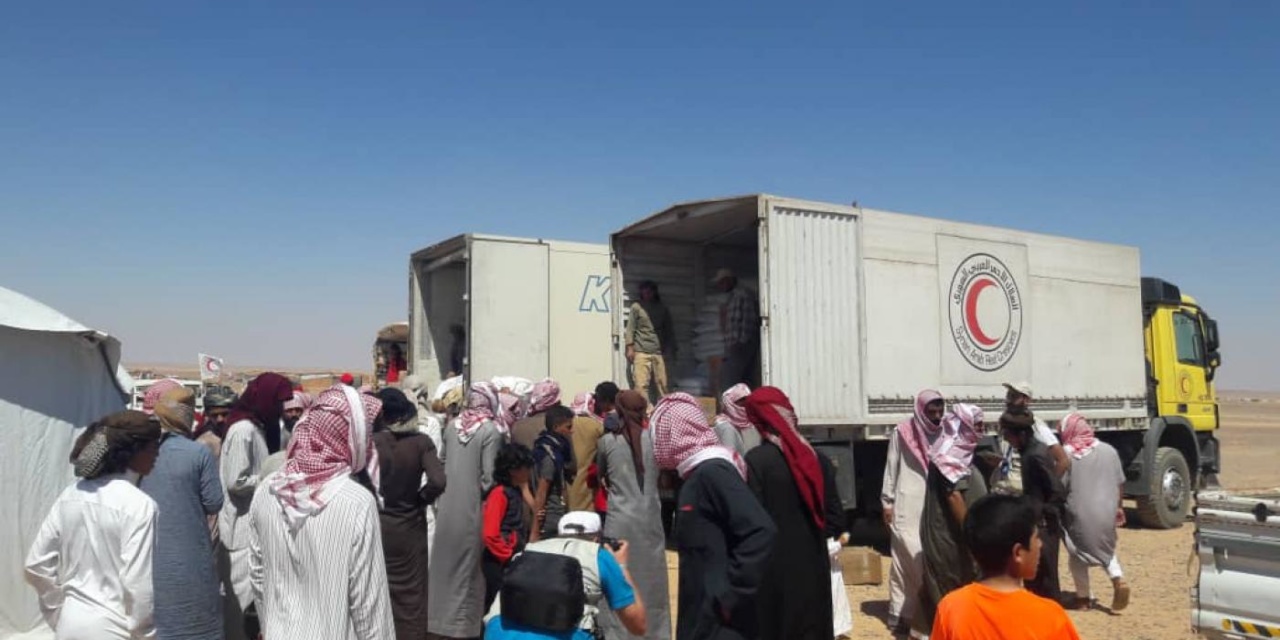 Zeina Khodr of Al Jazeera English reports on the deprivation in the Rukban camp, with the threat to the lives of its youngest residents:

ORIGINAL ENTRY, SEPT 5: The UN is planning the first aid convoy in three years to about 10,000 displaced civilians in the Rukban camp in southeast Syria.

But the proposal is subject to a series of conditions, including the consent and cooperation of the Assad regime. This has prompted concerns among the displaced that the convoy’s true intent is to press them into returning to regime-held areas in central Syria, despite their concerns about harassment, interrogation, and even detention.

The operational plan, dated August 2022 and seen by EA, seeks “to regularize the delivery of much needed humanitarian assistance to the people in need inside Rukban”, estimating that 3,500 residents need aid.

Residents and humanitarian activists question why the UN cites “anecdotal” reports that only 3,500 people remain in Rukban, or why it indicates that only some of the camp’s men, women, and children — rather than all of them — are in need. They also react to the UN’s proposal for “assessment of the existing infrastructure”, given that there is no infrastructure in the camp near the Jordanian border.

There is further caution about the UN’s inclusion of the Syrian Arab Red Crescent among the bodies to organize assistance, given the SARC’s links to the Assad regime.

But the red flag for many residents is the plan to “collect information that can be used to facilitate voluntary departures”. One explained, “The only reason for the regime to allow the convoy is to frame it as a return effort.”

“Collecting information” by the SARC is most critical. They tried to do that before in an intention survey in their most recent mission in 2019, and failed.

People recognized regime officials disguised as SARC workers. They are terrified to provide their personal details for obvious reasons.

A resident echoes, “They come only to photograph specific places in Rukban and count names that were not known to them and submit them to the regime.”

The involvement of the Assad regime in the mission is explicitly set out by the UN, through “approvals for the operation to proceed”, “guarantees of safe passage”, and “security guarantees” for humanitarian teams to remain in Rukban for the duration of the operation.

Russian officials, who are the essential backers, are also asked to guarantee passage between Damascus and southeast Syria. US forces at the Tanf base in eastern Syria, which maintains a 55-km (31-mile) security zone including Rukban, are asked to protect movement between the camp and aid distribution points.

The Rukban camp, in the barren area near the Jordanian border, was established in 2015 when civilians fled Islamic State attacks in Homs Province. But residents and activists date the current predicament from autumn 2018, when the Assad regime and Russia laid siege by cutting out the main route into the camp. Assad officials only allowed three UN aid convoys, the last in September 2019 — even those did not provide essential items, with claims that regime forces stole some of the assistance.

Since then, Damascus has blocked any UN initiative The population of Rukban, once about 75,000, has shrunk to about 10,000 amid the threat of starvation, disease from lack of sanitation and clean water, and serious injury or death from poor medical care.

In the absence of UN assistance, activists have arranged private deliveries ans services, including last month’s provision of water.

But a resident says:

This year is the worst for Rukban. It is a very harsh year for families, from hunger and thirst — the desert has not grown grass.

He adds, “Frankly this international mission would never be welcome, had it not been for the hunger and the need for food and aid.

In February, the US military finally arranged emergency medical care for some residents. Last week, a military mission visited Rukban for the first time.

A humanitarian activist, with connections in Rukban, says bluntly:

I think the visit of the Coalition forces is much more significant than the charade UN mission.

The entry of the Americans into Rukban will change the situation a lot, despite Jordan’s annoyance about this.

This will change a lot for the better.

But until regular American support is confirmed, the residents worry. Another activist says, after speaking with those inside the camp:

If the United Nations enters and provides assistance to the families, there will be no departure to the regime areas.

If it does not enter within a month, more than half of the camp will leave to the regime areas.