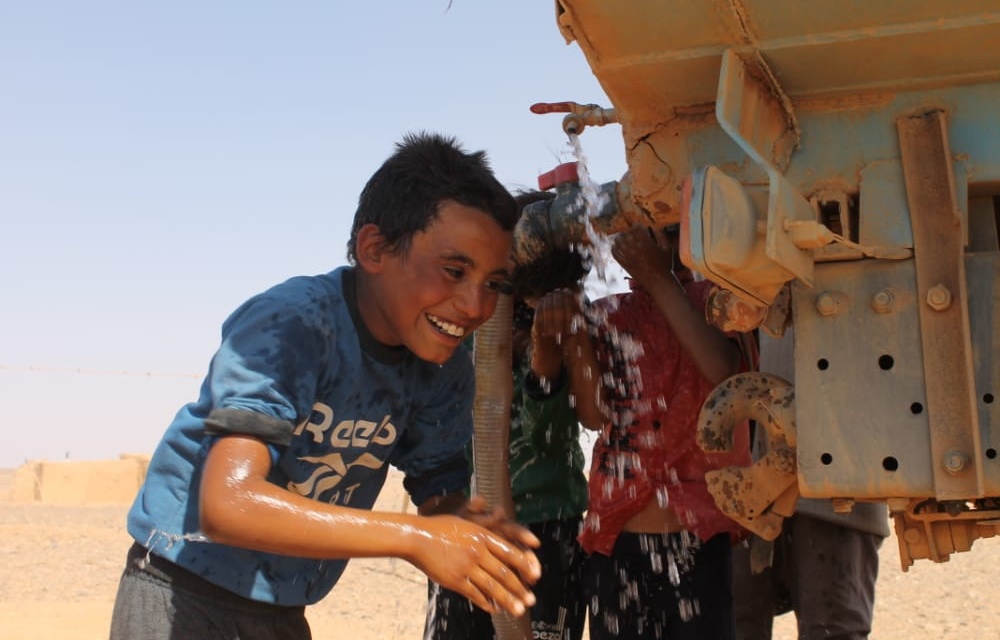 Photos Provided by a Local Activist

The US military has visited displaced Syrians in the Rukban camp for the first time since its creation in 2015.

The delegation, from the American base at Tanf, told residents that there are now directives for the review of conditions in Rukban. They also visited the medical clinic and reviewed the needs for medicines and basic healthcare.

Amid the ongoing quest for humanitarian aid for about 10,000 displaced, one of them welcomed the mission, “The entry of American forces is very important to prove that the camp does not contain terrorists,” as the Assad regime and its Russian backer repeatedly claim.

ORIGINAL ENTRY, AUG 29: Amid the ongoing failure of the UN to ensure aid, activists are providing water for about 10,000 displaced civilians in the Rukban camp in southern Syria.

At the end of May, without notice, the flow of water from Jordan — delivered through two points inside Syria — was sharply reduced. Taps ran for only one to two hours a day. Residents queued at midnight at pipes scheduled to provide water at 11 a.m.

“People started fighting over water….A man started quarreling with others who were waiting for their turn, and fired a pistol in the air. The clash was ended by giving the man some water: he hadn’t received any for several days.

Residents staged protests and activists pressed the UN humanitarian fund UNICEF, the US, and Jordan to restore the supply.

The besieged people in #Rukbanـcamp organized protests, calling on the international and local parties to rescue more than 7000 besieged by the regime forces and Russia, suffering from thirst and lack of food in the desert near the Iraqi-Jordanian border.#انقذوا_مخيم_الركبان pic.twitter.com/CcVt0zPFEB

The UN took no substantive action. A UNICEF spokesperson said in June there had been an “adjustment” in the water supply. In August the agency had “no update”.

So the Syrian aid organization Molham Volunteer Team, based in Turkey, launched a relief campaign under the slogan “Save the Rukban Camp”. Working with the Rukban Local Council, MVT purchased smuggled fuel to pump water from the Daqqaqa well, in the desert about 10 km (6 miles) from the camp.

Each day, 300 liters of drinking water and 300 liters of water for other uses are supplied to 60 families. A total of 200 Rukban families receive water twice per week.

The Syrian Emergency Response Team, also based in Jordan, is covering the cost of transporting water from the same well to complement Molham’s initiative. Five trucks, each carrying 16,800 liters of water, provide a daily supply.

The US military and the local anti-Assad faction Maghawir al-Thawra faction provided a new generator for the Daqqaqa well. The al-Khayifa well, about 50 km (31 miles) north of the camp, has been rehabilitated for use by MAT but can provide water for bedouins to take to Rubkan.

Muhammad Ahmad Derbas al-Khalidi, the head of the Rukban Local Council, tells Syria Direct, “The idea behind these projects is to ​​transfer water from wells in the desert to lower the consumption of drinking water pumped from Jordan.” 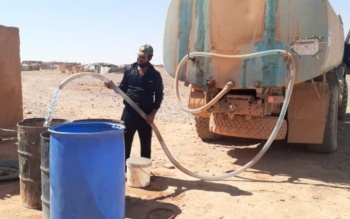 Rukban has been besieged by Assad regime forces and Russia since autumn 2018, when the main route into the camp was cut. Jordan closed the border in June 2016 after an ISIS suicide bombing, and the US military — based at Tanf on the Iraq border — did not intervene and risk confrontation with the Russians.

The camp once had about 75,000 residents from central Syria, displaced by an Islamic State advice in 2015. The siege, putting residents on the brink of starvation for years, reduced the population to about 10,000.

Residents have relied on smugglers bringing in vital supplies, but a regime crackdown in February threatened the lifeline.

“We are used to living in a state of perpetual crisis, we are constantly besieged,” says Mahmoud Qasem al-Hamili, a member of the Rukban Civil Administration, another group in Rukban that claims to represent the camp’s population. “But [the water crisis] really choked us.” 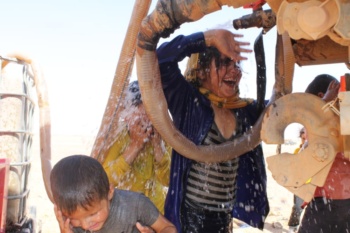