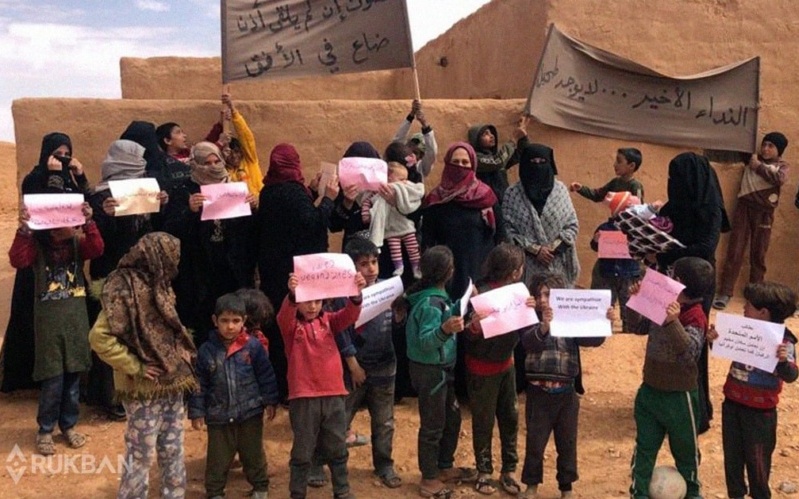 The first food convoy in years from Jordan has reached between 7,000 and 12,000 displaced civilians in the Rukban camp in southeast Syria near the border.

Besieged by Assad regime forces and Russia since autumn 2018, the camp — which once had about 75,000 residents from central Syria, displaced by an Islamic State advice in 2015 — has been on the brink of starvation for years.

Jordan closed the border in June 2016 after an ISIS suicide bombing. The last Jordanian aid delivery to Rukban was on a single day in January 2018. The Assad regime has only permitted three UN convoys in 3 1/2 years.

Residents have relied on smugglers bringing in vital supplies, but a regime crackdown in February threatened the lifeline.

The regime has also cut off almost all medical care, with only a rudimentary clinic staffed by nurses in the camp. In February, an international medical team entered Rukban for the first time in years.

A Marker of Jordan-Assad Relations?

Jordan had repaired links with the Assad regime broken during the Syrian uprising from March 2011.

Last July, the border was finally reopened to trade. Jordanian authorities cracked down on Syrian opposition activists and ordered independent Syrian media to leave the country.

But tensions have resurged over the Assad regime’s connections with drug smuggling, notable of the amphetamine Captagon, into Jordan and from there to the Gulf States. Jordan has seized more than 20 million Captagon pills from January to May 2022, up from 14 million in all of 2021.

Last month Colonel Mustafa Hiari, the Jordanian Army’s spokesperson, said on State TV of the regime and its allies:

We are facing a war along the borders, a drugs war and led by organisations supported by foreign parties. These Iranian militias are the most dangerous because they target Jordan’s national security.

Analysts suggest that Jordan could now turn to Syrian opposition factions to police the border. They includin Jaish Ahrar al-Ashair, a previous recipient of direct support from Jordan, and Maghawir al-Thawra, a group supported by the US base at al-Tanf in eastern Syria near the Iraq border.

A spokesperson for MAT said the faction is already protecting a 55-km (34-mile) US security zone around al-Tanf, including “preventing drug trafficking”.

MAT said it is “ready to cooperate with any party to eliminate drugs and terrorism promoted by the Assad regime and militias”, including outside the security zone.

Meanwhile, a Rukban resident tells Lyse Mauvais of Middle East Eye, “This is a good move, the situation in the camp is now better than it used to be. We hope this continues in the long run.”