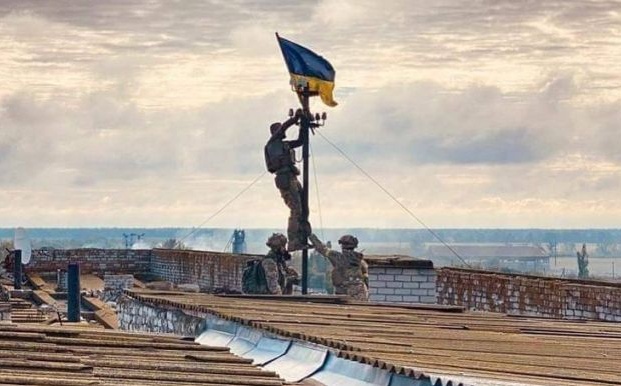 Ukrainian troops raise the national flag above a hospital in Vysokopillia after liberation of the town in southern Ukraine from Russian occupiers, September 4, 2022 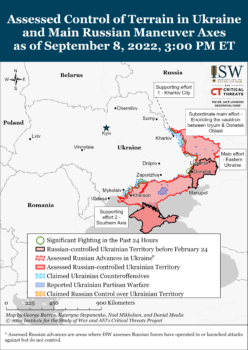 Ladies greet 🇺🇦 soldiers in liberated Balakliya after 6 months of 🇷🇺 occupation. “Boys, we have some pancakes left, would you like?” “A bit later, please, better still hide, shelling is still possible”. I can watch endlessly pic.twitter.com/n6XVRI8YfX

Announcing more Russian losses, Ukraine’s military has opened its daily report with a quote from the UK’s Queen Elizabeth II, who died on Thursday.

The message is from a World War II radio broadcast, to the children of the Commonwealth, by the 14-year-old Princess Elizabeth in October 1940.

"When peace comes, remember it will be for us, the children of today, to make the world of tomorrow a better and happier place."
Queen Elizabeth II

Total combat losses of the enemy from Feb 24 to Sep 9: pic.twitter.com/1ZYe71KMCH

The latest Russian attacks across the Donetsk region in eastern Ukraine killed nine civilians and injured 23 on Thursday.

Governor Pavlo Kyrylenko said five civilians were slain in Bakhmut, two in Zaitseve, one in New York, and one in Fedorivka.

At least 16 civilians have been killed and 25 wounded in the past 48 hours.

The US-based Institute for the Study of War reports further Ukraine advances in the Kharkiv region in the northeast, and projects a major success by early next week.

The analysts say the Ukrainians are within 15 km (9 miles) of Kupyansk and shelling the town: “Russian rear positions in Kharkiv Oblast are now exposed to further Ukrainian advances, and Ukrainian forces will likely capture Kupyansk within the next 72 hours.”

Geolocated footage shows damage from a strike on a Russian military headquarters in the town. Russian proxy official Vitaly Ganchev announced the evacuation of all women and children.

The ISW assesses that the liberation of Kupyansk will “severely degrade but not completely severe Russian ground lines of communication to Izyum”, the launching point for Russia’s offensive in eastern Ukraine.

ORIGINAL ENTRY: Ukraine President Volodymyr Zelenskiy has told the nation of the recovery of 1,000 sq km (385 sq miles) of territory in counter-offensives in the south and northeast of the country.

In his nightly video address, Zelenskiy said the advances “liberated dozens of settlements”:

Our heroes have already liberated dozens of settlements. And today this movement continued, there are new results.

In total, more than 1,000 square kilometers of our territory have been liberated since September 1.

The President maintained operational secrecy over details. However, he posted a video of Ukrainian soldiers capturing the key town of Balakliia in the Kharkiv region in the northeast.

Balkliia is Kharkiv and Russian-held Izyum, the launching point for Russia’s assault on the Donbas region. Its liberation threatens Russian supply lines, with Moscow’s troops vulnerable on their northwest flank.

At the beginning of Thursday, the Ukrainian military said 400 sq kilometers of territory had been liberated. The number rose to 700 during the day, before Zelenskiy’s late-night report of 1,000.

The Russian Defense Ministry did not make any statement about the situation in the northeast. Russia’s UN Ambassador Vassily Nebenzia also did not mention Kharkiv while maintaining that Ukraine had only recaptured “several peripheral villages” in the south: “Of course, there is no talk of any breakthrough. This is well understood by military experts.”

A Meeting with the Americans

Zelenskiy also spoke of his surprise meeting with US Secretary of State Antony Blinken in Kyiv on Thursday.

I thanked the Secretary of State for his personal role in helping us; President Biden – for the decisive and effective leadership; the US Congress – for the unwavering bipartisan and bicameral support, and every American – for their sincere understanding of our struggle.

The President noted twin announcements accompanying Blinken’s sudden visit: another $675 million in direct military assistance, and $2 billion — half for Ukraine and half for 18 other countries threatened by Russia — in military financial support.

Zelenskiy said he and Blinken also discussed political cooperation, macroeconomic support, and recovery and reconstruction plans. The President pressed again for designation of Russia as a terrorist state, a step rejected by the Biden Administration so far.

At the meeting of Defense Ministers and commanders in Germany, Gen. Mark Milley, the Chairman of the US Joint Chiefs of Staff, pointed to the central role of US-supplied HIMARS rocket systems in Ukraine’s success on the battlefield.

We are seeing real and measurable gains from Ukraine in the use of these systems….The Ukrainians have struck over 400 targets with the HIMARS and they’ve had devastating effect.

Russian lines of communication and supply channels are severely strained. It is having a direct impact on the Russian ability to project and sustain combat power. Russian command and control in their headquarters have been disrupted and they’re having great difficulty in supplying their forces and replacing their combat losses.