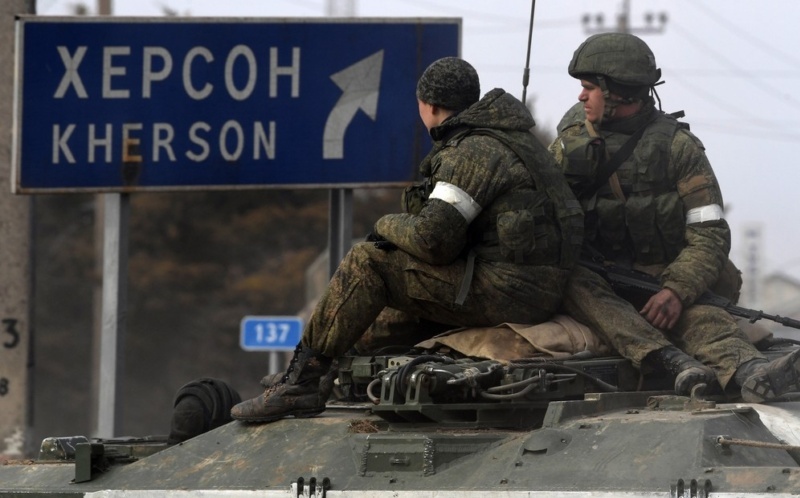 There has been another assassination attempt on a Russian proxy official in southern Ukraine.

Artem Bardin, commandant in the occupied port of Berdyansk, was seriously injured by a car bomb in the city center near the building of the civil-military administration.

A statement said he is “hospitalized in severe condition”.

Ukrainian partisans have killed or wounded a series of Russian proxy officials inb bombings and shootings.

Reporting on the situation at the Russian-occupied Zaporizhzhia nuclear power plant in southern Ukraine, the International Atomic Energy Agency says it is “gravely concerned”:

It is the first time a military conflict has occurred amid the facilities of a large, established nuclear power programme. A nuclear accident can have serious impacts within the country and beyond its borders….

Pending the end of the conflict and re-establishment of stable conditions there is an urgent need for interim measures to prevent a nuclear accident arising from physical damage caused by military means.

This can be achieved by the immediate establishment of a nuclear safety and security protection zone.

Without attributing responsibility, the mission said it “closely” witnessed shelling near the complex and observed damage.

The shelling could have impacted safety related structures, systems and components, and could have caused safety significant impacts, loss of lives and personnel injuries.

The team expressed another safety concern:

Ukrainian staff operating the plant under Russian military occupation are under constant high stress and pressure, especially with the limited staff available. This is not sustainable and could lead to increased human error with implications for nuclear safety.

The Russian newspaper Kommersant has published a front-page editorial in support of journalist Ivan Safronov, sentenced to 22 years in prison on treason charges on Monday (see yesterday’s entry).

In an open letter to Safronov, a former military correspondent for Kommersant, the editors say he became “the best in his field” with colleagues at the newspaper “lucky to work with you”.

They emphasize they “haven’t heard any public evidence of your guilt”:

You didn’t give up — and don’t give up now….We love you, we believe in you. We are waiting for you.

An internal report for the Kremlin sets out the scale of Russia’s economic decline amid the invasion of Ukraine.

The report was prepared for months and presented to a closed-door meeting of senior officials on August 30.

The analysis sets a “blockade” which “has affected practically all forms of transport” and cut off the economy. Up to 200,000 IT specialists will leave the country by 2025.

There will be “reduced production volumes in a range of export-oriented sectors”, such as oil and gas, metals, chemicals, and wood products: “These sectors will cease to be the drivers of the economy.”

If Russia persists with the cut-off of gas to Europe, Moscow will lose up to 400bn rubles ($6.6 billion) in tax revenues. Metals producers are already losing $5.7 billion per year.

Further contraction will occur because of “the suspension of production due to lack of imported raw materials and components. There are simply no alternative suppliers.”

Publicly, Russian officials say the fall in GDP is 2.9%, with a return to the pre-invasion level by next year.

Asked about the internal document, Economy Minister Maxim Reshetnikov said it was “analytical estimates that was used to calculate what would happen if we resist, don’t do anything”.

A day after the revocation of the license of the leading independent newspaper Novaya Gazeta (see 0625 GMT), a Moscow court has ordered the same for its sister magazine No.

The court used the pretext that the magazine did not publish from 2009 until its re-appearance in 2022.

The backup power supply at the Russian-occupied Zaporizhzhia power plant in southern Ukraine has again been disconnected to extinguish a fire, disconnecting the complex’s only operational reactor from the Ukrainian electricity grid.

“Due to a fire caused by shelling, the line was disconnected, that is the last line linking the ZNPP/ZTPP hub to the power system of Ukraine,” state operator Energoatom said.

The International Atomic Energy Agency assured that the line is not damaged and that power for the complex’s six reactors, ensuring they do not overheat, is being maintained.

The IAEA is due to release its report today on the situation at the plant, having finally obtained access last Thursday. Four of the six team members left the complex on Monday, with the two hoping to maintain a permanent presence.

In recent weeks, the Zaporizhzhia reactors have been detached from the electricty grid because of shelling. President Volodymyr Zelenskiy said on Monday night that the Russians are again responsible.

This is the second time, due to Russian provocation, that the Zaporizhzhia plant is one step away from a radiation disaster.

This can be corrected only by strengthening sanctions, only by officially recognizing Russia as a terrorist state – at all levels.

US intelligence services say Russia is buying millions of rockets and artillery shells from North Korea.

An American official said the purchase illustrates that “the Russian military continues to suffer from severe supply shortages in Ukraine, due in part to export controls and sanctions”.

US intelligence assesses that Moscow may purchase additional North Korean military equipment in the future.

The Russians have already turned to Iran to cover its deficiency in battlefield drones.

In the face of combat losses, it is likely that Russia is struggling to maintain stocks of UAVs [unmanned aerial vehicles], exacerbated by component shortages resulting from international sanctions.

The UK estimates that 25,000 Russian troops have been killed so far in Vladimir Putin’s invasion of Ukraine.

The assessment matches that of the US Pentagon, whose official Colin Kahl said last month that Russia had lost 70,000-80,000 of its troops. The Ukrainian military says almost 50,000 Russian forces have been killed.

Wallace said the Ukrainian counter-offensive in the south is making “real gains” but fighting is “close and hard”: “Ukraine has inflicted serious damage on a range of river crossings with the aim of restricting Russian logistical support.”

The leading independent Russian newspaper Novaya Gazeta was stripped of its license by a Moscow court on Monday.

The ruling confirms the long-term ban of the publication, whose editor-in-chief Dmitry Muratov was a co-winner of the the 2021 Nobel Peace Prize.

Russia’s media regulator Roskomnadzo purused the ban on the the pretext that documents were not provided about a change of ownership in 2006.

Muratov said outside the court that the ruling was “a political hit job, without the slightest legal basis”, and confirmed the paper would appeal.

Next week, a Moscow court will decide whether to revoke the licence for Novaya Gazeta’s website.

The newspaper was established, with the support of former Soviet leader Mikhail Gorbachev, in 1993. The ban was announced two days after Gorbachev’s funeral.

The outlet has persisted despite threats to staff. Some journalists, including Anna Politkovskaya, have been killed. Muratov has been harassed and attacked during the Russian invasion of Ukraine.

In March, Novaya Gazeta ceased operations inside Russia until the end of the war after several warnings from the state censor for alleged violations of the “foreign agent” law.

Staff left Russia and launched Novaya Gazeta Europe from several cities in Europe. Its website has also been blocked by Russian authorities.

ORIGINAL ENTRY: Facing a Ukrainian counter-offensive and local resistance, Russia has “paused” annexation of the south of Ukraine.

Kirill Stremousov, the Russian proxy deputy head of the occupied Kherson region, announced the setback on Monday, “We have got prepared for voting. We wanted to organise the referendum in the near future, but because of the current developments, I think we will take a pause.”

Russia and its proxies had hoped to hold the referendum on September 11. But even before the counter-offensive, plans were beset by opposition from residents and by the sabotage and assassination operations of Ukrainian partisans.

After a series of proxy officials were killed, wounded, or escaped bombings, Stremousov was recently located in Voronezh in Russia, more than 500 miles from Kherson.

Ukraine’s counter-offensive, launched just over a week ago, has broken through Russia’s initial line of defense and regained some territory. Artillery and missiles continue to degrade Russian capabilities with attacks on bridges, ammunition depots, and logistical positions.

Stremousov confirmed that the Antonivskiy Bridge, a vital link across the Dnipro River to the western Kherson region and Kherson city, has been damaged by Ukrainian forces and can no longer carry traffic.

Natalia Humeniuk, a spokesperson for Ukraine’s Southern Command, said the Russian occupiers, having repeatedly delayed the referendum, and were now incapable of carrying out the plan because they were “constantly distracted by events on the frontline”.

Humeniuk repeated the call for “silence”, with information about Ukraine’s next move withheld “until the work is complete”.

She said Russia is moving more personnel and equipment from Crimea, occupied in 2014, north to Kherson to cover its losses: “We are monitoring the situation but we are not panicked.”