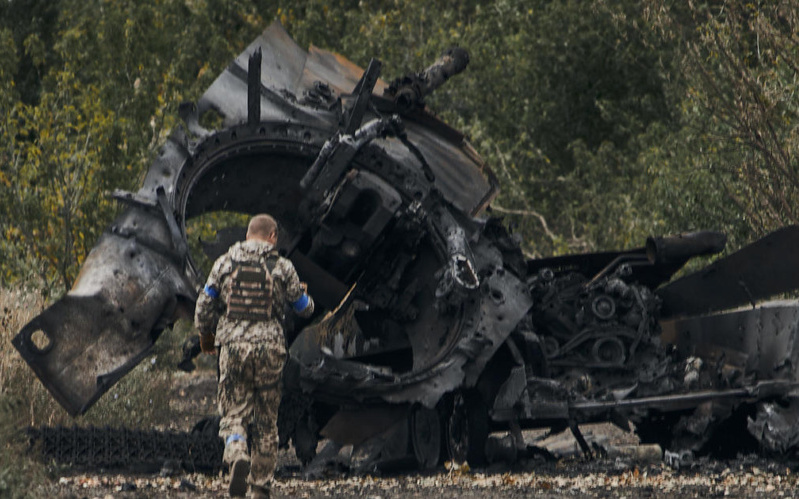 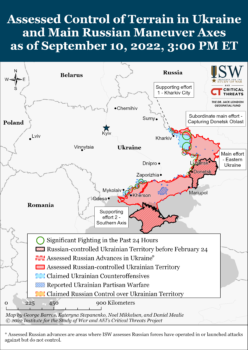 The Russian proxy “Donetsk People’s Republic” in eastern Ukraine have sentenced a Ukrainian staff member of the Organization for Security and Cooperation in Europe to 13 years in prison for “treason”.

Dmitry Shabanov and other local employees of the OSCE were detained in April as the security organization was forced to suspend operations. He was accused of passing confidential information to foreign intelligence services, after recruitment in 2016 by a former officer of Ukraine’s SBU security service and a CIA agent in Ukraine.

The OSCE has “unequivocally” condemned the charges against Shabanov and Mikhail Petrov, another detained staffer detailed in April, as “totally unacceptable so-called ‘legal proceedings’”.

The latest Russian attacks across the Donetsk region in eastern Ukraine have killed three civilians.

Governor Pavlo Kyrolenko said the victims were in Toretsk, Yahidne, and Bohorodychne.

Poland, Estonia, Latvia, and Lithuania have implemented a visa ban for Russian citizens travelling for tourism, culture, sport, or business.

The four countries had supported a European Union-wide visa ban. With other members in opposition, the EU compromised last month with suspension of a visa facilitation deal with Moscow, making travel more complicated and expensive for Russians.

Currently, all three power units of the PNPP [Pivdennoukrainsk Nuclear Power Plant[ are operating normally. Fortunately, there were no casualties among the station staff.

Ukraine President Volodymyr Zelenskiy said, “The invaders wanted to shoot again, but they forgot what a nuclear power plant is. Russia endangers the whole world. We have to stop it before it’s too late.”

President #Zelenskyy published a video of a rocket explosion on the territory of the South #Ukrainian nuclear power plant. pic.twitter.com/Vhhm3XePD5

The six reactors at southern Ukraine’s Zaporizhzhia nuclear power plant, Europe’s largest, are still shut down as Russia refuses to demilitarize the site and continues to shell Ukrainian-held territory across the Dnipro River.

The losses take the Russian total to about 55 in its invasion.

The British analysts assess it is possible that the Russian warplanes are taking greater risks with close air support to ground forces under pressure from Ukraine’s counter-offensives.

They add, “There is a realistic possibility that some aircraft have strayed over enemy territory and into denser air defence zones as the frontlines have moved rapidly.”

And they conclude, “Russia’s continued lack of air superiority remains one of the most important factors underpinning the fragility of its operational design in Ukraine.”

ORIGINAL ENTRY: As Ukraine forces continue to advance in their counter-offensive in the northeast, Russia is increasingly relying on ill-prepared volunteers as well as proxy troops from the Donetsk and Luhansk “People’s Republics”, assess military analysts.

The US-based Institute for the Study of War says the volunteers are hurriedly assembled into irregular units rather than put into pools for regular combat units.

The weakness of the process has already been exposed in Ukraine’s 13-day counter-offensive in the Kharkiv region, which has taken more than 8,000 square km (3,088 square miles) and is now at the border with neighboring Luhansk, seized by the Russians this summer.

The 3rd Army Corps was constructed to check the counter-offensive. However, only 10,000 of 20,000 troops could be raised, and units were soon decimated by the Ukrainians. Some reportedly lost 90% of personnel through casualties or defections.

A prominent Russian military blogger wrote this weekend that Russian forces have “already began the process of forming and staffing the 4th Army Corps, at least on a documentation level.”

Video has confirmed that Vladimir Putin’s allies — such as Yevgeny Prigozhin, the financier of the mercenary Wagner Group — are recruiting prisoners for the Ukraine frontline. Elements of Russian security services such as the Federal Security Service and Rosgvardia [National Guard] have been deployed, and men from the Russian-occupied Donetsk and Luhansk regions are being covertly mobilized.

With his pretense that the invasion is a “special military operation” rather than a war, Putin has refused to declare a general mobilization.

ISW notes, “The formation of irregular, hastily-trained units adds little effective combat power to Russian forces fighting in Ukraine….The reported arrival of increasing numbers of irregular Russian forces on the battlefield has had little to no impact on Russian operations.

Ukrainian forces made a significant advance over the weekend, crossing the Oskil River and consolidating their positions on the eastern bank.

The Oskil runs through the important rail hub of Kuplyansk, whose western half was liberated by Ukraine on September 9. The Russians had blown up the city’s main bridge in an attempt to prevent the Ukrainians from moving into the eastern section.

A Ukrainian official pointed to the liberation of Lyman, another important rail hub, as the next objective. The official said forces could then begin the recapture of the Luhansk region, which was fully seized by the Russians at the start of July.

ISW also says Ukraine is also making more gradual progress in its counter-offensive in the Kherson region in the south.

The operation was launched in late August. It has taken some territory in western Kherson. More importantly, attacks have destroyed bridges, ammunition depots, logistics, and lines of communications, seeking to weaken the Russian defenses.

Ukrainian forces remain likely to regain much if not all of western Kherson Oblast in the coming weeks if they continue to interdict Russian GLOCs and press their advance. Ukrainian gains may continue to be slow if the Russian troops can retain their coherence but could also accelerate significantly if Russian forces begin to break.