Why Assad Regime is Doomed to Fail in Southern Syria 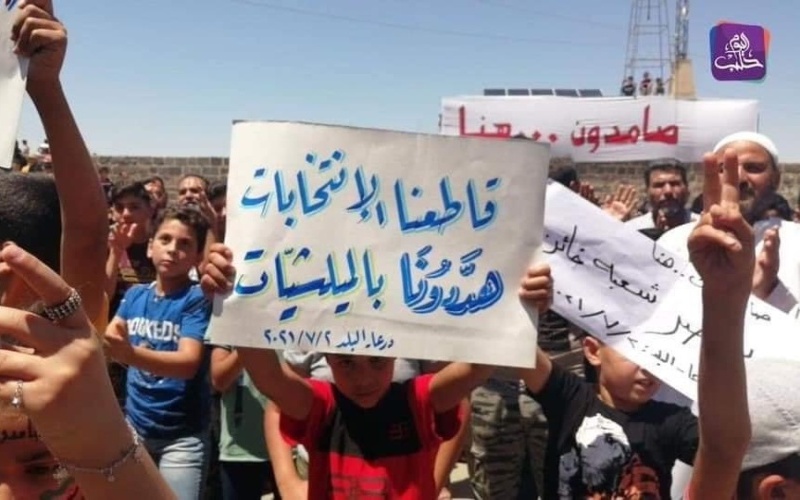 A boy holds up a poster in a protest against sieges in Daraa Province in Southern Syria, “We boycott the elections, they threatened us with militias”, July 2, 2021

On July 27, Syrian tanks rolled into the former rebel stronghold of Tafas, in southern Syria’s Daraa Province. The aggression, ostensibly to root out supporters of Islamic State, came just three days after military leaders suggested the operation could be avoided if the people they sought were voluntarily handed over.

No matter what the government claims – or promises, for that matter — its moves in places like Tafas are part of a larger, more ambitious, strategy: to consolidate dominance, through a mix of violence and negotiations, in areas where its authority is still contested.

Compared with other government-held areas, Daraa governorate, in Syria’s south, occupies a special status. It was the epicenter of unrest in 2011 that precipitated the civil war. Today, it remains stubbornly resistant to President Bashar al-Assad’s control. Opposition forces in the region maintain strong support, and unlike other areas reconquered by Damascus, such as Eastern Ghouta, Daraa is at least partially untamed.

Russia played an early role in delivering this scenario. A surrender agreement brokered by Russian forces in 2018 gave Tafas and Daraa al-Balad, among other districts inside Daraa governorate, a level of local autonomy under Moscow’s protection.

The deal allowed the Assad regime to reopen state institutions in Daraa but prevented it from establishing a military or security presence. It also helped Russia secure its strategic interests in the region – and ensure that its man in Damascus survived.

This tradeoff was initially convenient for Bashar al-Assad, as it allowed Damascus to regain territorial control over Syria’s south without incurring additional losses. But the government’s recent use of force against towns that do not have a strong government presence demonstrates that Assad is no longer content with the arrangement.

The government cannot rely on overwhelming military force to capture Daraa’s rebel-held towns, given the potential impact fighting could have on the national security of neighboring countries, particularly Jordan. Russia’s repeated calls for restraint also suggest that the Kremlin has a vested interest in ensuring Syria’s military activities don’t breach the southern border.

Rather than a full-scale assault, then, the Assad regime looks for smaller opportunities to regain the upper hand.