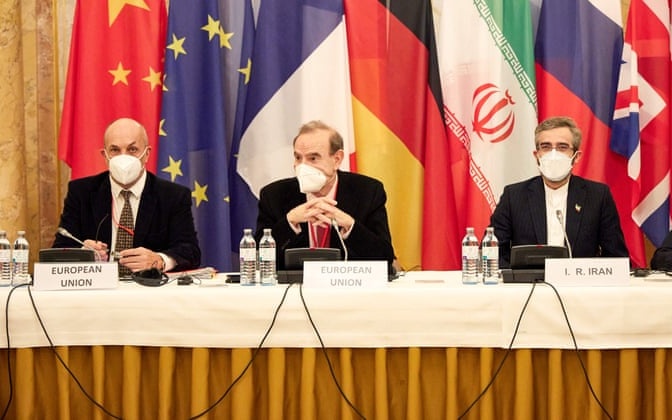 Facing a European Union deadline, Iran has delivered a response to the EU’s “final text” for revival of the 2015 nuclear deal.

The EU had called for agreement by all parties (Iran, US, UK, France, Germany, China, and Russia) by midnight on Monday. Iran did not give its assent, but a “senior Western official” said Tehran sent a response on Monday evening.

Nabila Massrali, a spokesperson for EU foreign policy chief Josep Borrell, confirmed Iran’s reply on Tuesday, “We are studying it and are consulting with the other JCPOA [Joint Comprehensive Plan of Action] participants and the US on the way ahead.”

The Iranian response is focused on assurances over sanctions, guarantees that the deal will not be suspended, and safeguards including International Atomic Energy Agency inspections.

The Western official said that while Iran wanted to continue discussions on some issues, its response was not “too inflammatory”.

In its response Iran has expressed its concerns, but…the remaining issues are not very difficult to resolve. Those concerns are founded upon past US/EU violations. I can’t say that there will be a deal, but we’re closer than we’ve been before.

Marandi, who is usually hostile towards the US and European powers, signalled last month that Iran was dropping a key demand holding up the talks since March. The academic indicated that the Biden Administration did not have to removed Iran’s Revolutionary Guards from a list of “foreign terrorist organizations”.

A “senior Iranian diplomat” says the European Union’s draft to revive the 2015 Iran nuclear deal “can be acceptable if they provide Iran with assurance on the issues of safeguards, sanctions. and guarantees”.

On Monday, the EU put forward a “final” text after four days of indirect talks between Americans and Iranian officials in Vienna. Delegations returned to national capitals for consultations about the document.

A “senior EU official” made clear that there can be no more changes of the draft. He said he expects a final decision from all parties (Iran, US, UK, France, Germany, China, and Russia) within a “very, very few weeks”.

Iranian officials have publicly rejected that the text is “final”, reserving their position in saying they would convey their “additional views and considerations” after consultations in Tehran.

Iran and the US are close to agreement on renewal of the 2015 nuclear deal, says the European Union’s broker of the discussions.

Enrique Mora said on Sunday evening that the text of an agreement could be closed in forthcoming hours: “We were negotiating some technical questions that were open in the text. We are advancing and I expect that we will close this negotiation soon.”

A remaining obstacle is Iran’s demand that the International Atomic Energy Agency close its multi-year investigation of Tehran’s nuclear program.

The IAEA is examining the presence of nuclear material at three undeclared Iranian sites. Iran responded by limiting IAEA inspections and refusing to hand over surveillance videos.

Iran cut off more than 20 monitoring cameras on June 9, after the IAEA Board of Governors censured Tehran for failing to comply with inspections and to provide necessary information.

Western officials have said they will not intervene to close or set a deadline for the IAEA investigation. A “Western diplomat” said there will be no reference to any Iranian demand in the final text of an agreement.

There are no formal negotiations on Monday because of Iran’s religious day of Ashura. However, diplomats said there are informal discussions.

A “senior EU official” says progress was made in renewed talks on Thursday over the 2015 Iran nuclear deal.

The official said the progress in Vienna included guarantees that the US will not again withdraw from the deal. Iran has sought the assurances after the Trump Administration unilaterally walked out of the agreement in May 2018, imposing comprehensive sanctions on Tehran six months later.

Despite questions about how the US can deliver the assurance — given opposition by many Republicans in Congress to such a provision — the official said, “We have now quite substantial guarantees. It’s my understanding that Iran is happy and feels satisfied with what is in the text.”

The official also confirmed that Iran has dropped its demand for removal of the Islamic Revolutionary Guard Corps from the US list of “foreign terrorist organizations”.

The issue will be handled “in the future” apart from the deal, the source said.

However, discussions are ongoing about “issues related to sanctions lifting and a couple of nuclear questions that did not exist in March as the Iranians advanced their program”. The official summarized:

We are a bit exhausted, I cannot imagine myself here in four weeks. This is not another round, we are here to finalize the text.

I think there is a real possibility, but it’s not going to be easy.

ORIGINAL ENTRY, AUGUST 4: Talks on renewal of the 2015 Iran nuclear deal resume in Vienna on Thursday, but European and US officials are cautious about any advance.

The negotiations are seeking re-entry of the US to the agreement, which also includes the UK, France, Germany, China, and Russia; the lifting of American sanctions on Tehran; and Iran’s return to compliance with the terms, including limits on enrichment of uranium.

The discussions were close to completion in March; however, they stalled over Tehran’s insistence that the US remove the Islamic Revolutionary Guards Corps from the list of “foreign terrorist organizations”. The Trump Administration added the IRGC in April 2019, five months after withdrawing from the deal.

The renewal of the discussions was finally prompted last week by the tabling of a draft text by the European Union’s foreign policy head Josep Borrell.

“I Doubt Iran Will Seize This Opportunity”

European and US officials emphasized on Wednesday that Borrell’s draft is largely a reiteration of the position from March, in the hope that Iran will no longer set the condition over the IRGC.

There have been signals from the Iranians that they will separate the nuclear discussions from the issue of the Guards; however, European and US officials do not expect completion of the agreement on March’s terms in the near future.

A diplomat from one of the European countries in the agreement said:

My expectations are very low. I doubt Iran will seize this opportunity; it risks being more about trying to play things out and blurring responsibilities.

But situation is very clear: there is a text on table which Borrell described as best possible. There may be some room for clarifications and minor points mainly between US and Iran. This is why E3 [UK, France, and Germany] negotiators are not going.

The diplomat emphasized, “Iran must drop demands both extraneous to the Joint Comprehensive Plan of Action and unrealistic,” specifically mentioning Tehran’s demand that the International Atomic Energy Agency halt its investigation of nuclear material at three undisclosed sites.

Censured by the IAEA Board of Governors, Iran has sharply curbed inspections and monitors, removing cameras from nuclear facilities and withholding surveillance videos.

Iran signalled on Wednesday that it will not make any compromises in Vienna. Its lead negotiator, Deputy Foreign Minister Ali Baqeri Kani, tweeted:

Heading to Vienna to advance the negotiations. The Onus is on those who breached the deal & have failed to distance from ominous legacy. The US must seize the opportunity offered by the JCPOA partners’ generosity; ball is in their court to show maturity & act responsibly.