Ukraine War, Day 144: Zelenskiy — “No Russian Missiles or Artillery Can Break Our Unity” 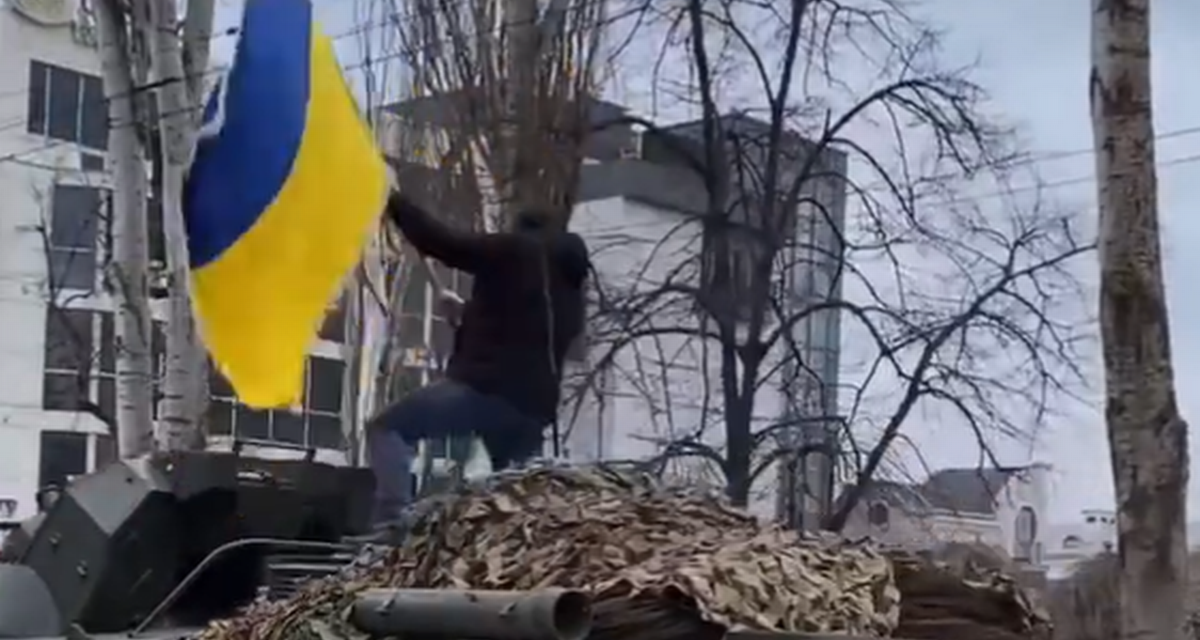 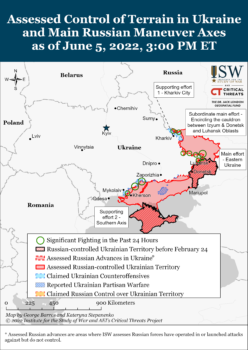 Kyiv region police chief Andriy Nebytov says 1,346 civilians have been found dead in the area after the withdrawal of occupying Russian forces.

Nebytov said 700 of the murdered were shot with small arms. He added that about 300 people are still missing.

Russia has paraded another captured UK national on Russian TV.

John Harding, in his 50s, was “interviewed” by a Russian presenter in the Russian proxy “Donetsk People’s Republic” in eastern Ukraine. He was apparently captured in May when Mariupol in southern Ukraine was finally overrun by Russian forces after 12 weeks of bombardment, siege, and ground assaults.

Harding says in the video that he may face the death penalty.

Russia claims in the video that the Briton was in the Azov Regiment. Harding has told friends that he was with the Ukraine National Guard.

On Friday, Russian TV featured the “interview” of UK national Aiden Aslin, sentenced to death last month in Donetsk, by a US conspiracy theorist. Aslin was forced to see the Russian national anthem for the broadcast (see 0815 GMT).

The UK’s Chief of Defense Staff says Russia has lost more than 30% of its land combat effectiveness.

Admiral Sir Tony Radakin, the chief of the defence staff for the UK, said on British TV:

[Ukrainian forces] are absolutely clear that they plan to restore the whole of their territory in terms of Ukraine, and they see a Russia that is struggling, a Russia that we assess has lost more than 30% of its land combat effectiveness.

What that actually means is 50,000 Russian soldiers that have either died or been injured in this conflict, nearly 1,700 Russian tanks destroyed, nearly 4,000 armoured fighting vehicles that belong to Russia destroyed.

Bakonov is Zelenskiy’s longtime friend, having run his entertainment company and his 2019 Presidential campaign, but he faces criticism over the loss of the port city of Kherson in southern Ukraine in the first days of the Russian invasion.

Counter to Zelenskiy’s orders, Gen. Serhiy Kryvoruchko, the head of Kherson’s SBU directorate, ordered his officers to evacuate the city before it was overrun. His assistant Col. Ihor Sadokhin is accused of telling Russian forces heading north from Crimea of the locations of Ukrainian mines. Departing in a convoy of SBU operatives to the west, Sadokhin allegedly helped coordinate a flight path for Russian warplanes.

SBU agents failed to blow up the Antonovskiy Bridge that crosses the Dnipro River, with Brig. Gen. Andriy Naumov, the head of the agency’s internal security department, fleeing abroad a few hours before the invasion.

The three former SBU officials have been charged with state treason. Zelenskiy stripped Naumov and Kryvoruchko of their ranks on March 31 and denounced them as “traitors”.

UK national Aiden Aslin, facing execution in the Russian proxy area in eastern Ukraine, has been paraded before TV cameras and forced to sing the Russian national anthem.

Aslin, fellow Briton Sean Pinner, and Moroccan Brahim Saadoun — captured while fighting in Ukrainian units in Mariupol — were condemned in Russian-controlled Donetsk in June. Aslin and Pinner have filed appeals.

Andrei Pivovarov, a prominent critic of the Kremlin, has been sentenced to four years in prison for “undesirable” activities.

Pivovarov is the former head of the pro-democracy group Open Russia. He was detained in May 2021 after he was removed from a plane departing for the Polish capital Warsaw.

Russian authorities have been imposing lengthy prison sentences on anti-war activists, and arresting others.

Earlier this week, a court ordered the further detention of Moscow city councillor Ilya Yashin for two months. He faces up to 15 years in prison on a charge of “spreading fake information” about the Russian military.

Russian shelling killed three civilians and injured 12 across the Donetsk region in eastern Ukraine on Saturday.

Governor Pavlo Kyrylenko said two civilians were killed in Udachne and one in Pokrovsk.

Attacks are also reported on Kharkiv in northeast Ukraine:

Russia is bombarding Kharkiv with vicious consistency. First attacks begin at 10 pm, followed by rocket strikes on civilian targets at 3 am. Listen to the dreadful sound. pic.twitter.com/1WftX5bgpV

ORIGINAL ENTRY: Ukraine President Volodymyr Zelenskiy has responded to Russia’s invasion, and specifically to its deadly attacks on civilians, with the assurance, “No Russian missiles or artillery can break our unity.”

In the past week, Russian missile strikes have killed up to 150 civilians, including 48 in Chasiv Yar in eastern Ukraine last Sunday and 24 in Vinnytsia in the center of the country on Thursday. On Saturday, at least three people were killed and 15 wounded in Dnipro when two of six Russian missiles evaded anti-air defenses.

Ukraine has withstood Russia’s brutal blows. We have already managed to liberate part of the territory that was occupied after February 24. We will gradually liberate other regions of our state that are currently under the occupation. During such a war, we were able to obtain the status of European Union candidate. We have maintained the stability of public institutions….All logistical processes in the state – military and economic – were repurposed.

And most importantly, we maintain internal unity, having overcome conflicts and contradictions that had hindered us in the past.

He added, amid Russian disinformation denying any killing of civilians, “Ukrainian unity cannot be broken by lies or intimidation, fake information or conspiracy theories.”

After the failure of its initial objectives, Russian forces have used their 10:1 artillery advantage to devastate and overrun the Luhansk region in eastern Ukraine, and are threatening Ukraine-controlled areas of the neighboring Donetsk region.

However, Ukrainian forces have held their defensive lines. And in the south, they are advancing in a counter-offensive, retaking territory occupied by Russia in the opening days of the invasion. Military spokesperson Natalia Hemeniuk summarized the situation in the Kherson region, “We are advancing there. Maybe we are not moving as fast as those who present positive news would like, but believe me, these steps are very confident.”

UK military intelligence said on Sunday that Russia is reinforcing its defensive positions across occupied parts of southern Ukraine. Troops and equipment are being moved between Mariupol and the Zaporizhzhia region, and Russian forces in Melitopol are stepping up security measures.

The counter-offensive has been supported by Ukrainian strikes, using recently-supplied US medium-range rocket systems, on Russian ammunition depots across the area.

We will stand. We will win. We will win back our, rebuild our lives. We will do it together — that’s the only way it can be done….

This is our obligation to all generations of our people who fought for our freedom and sovereignty of Ukraine.