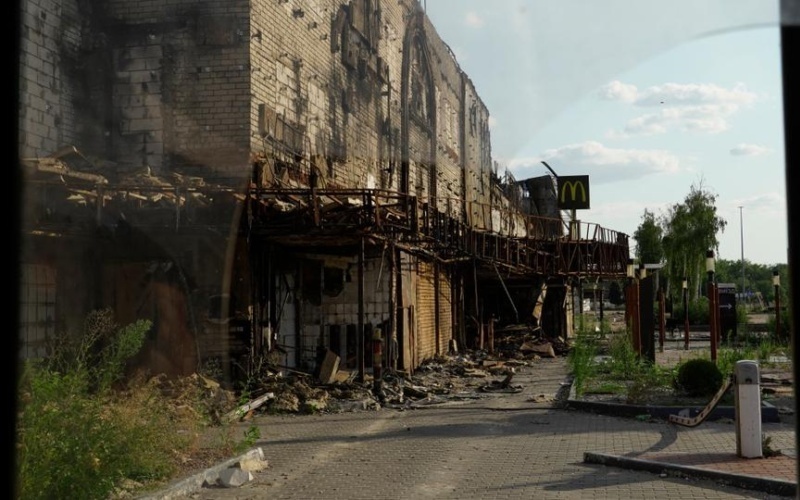 The destroyed Fabrika shopping mall in the Russian-occupied city of Kherson in southern Ukraine, July 20, 2022 (AFP)

Foreign Minister Sergey Lavrov has ripped up Vladimir Putin’s pretext that the Russian invasion is a defense against the “West” and NATO, or that it is limited to operations in the Donbass in eastern Ukraine.

Lavrov admitted that Moscow’s goal is to overthrow Ukraine’s Zelenskiy Government, a goal that it failed to achieve in the opening days of its “special military operation”.

Lavrov said at an Arab League summit in Cairo on Sunday the Kremlin sought to help Ukrainians “liberate themselves from the burden of this absolutely unacceptable regime”.

He declared, “Russian and Ukrainian people would continue to live together, we will certainly help Ukrainian people to get rid of the regime, which is absolutely anti-people and anti-historical.”

Even as Russian forces tried to overrun the capital Kyiv early in the February 24 invasion, Russian officials repeatedly said they were not seeking to remove the Zelenskiy Government.

The Russian quest culminated in failure with withdrawal from northern Ukraine at the end of March.

“This cuts their logistical chains and takes away their ability to conduct active fighting and cover our armed forces with heavy shelling,” Reznikov said on Ukrainian TV.

Last month, Germany promised to send 30 Gepards, but ammunition for the weapons had to be sourced.

In 2010, Demchenko pushed the Kharkiv Accords, an agreement that allowed Russia to extend the lease of its naval base in Crimea, in return for discounts on gas. The base was instrumental in Russia’s 2014 occupation of the Crimea peninsula.

Mayor Oleksandr Syenkevych wrote that “a private warehouse and the territory of several private enterprises” were also in overnight strikes. Windows in a nine story high-rise buildings were blown out by the shock wave and debris. Commercial buildings, cars, and a garage were also damaged.

Five people, including a teenager, were wounded.

Trying to win over Arab and African countries in a tour of the Middle East, Russian Foreign Minister Sergey Lavrov has lied about last Friday’s deal to lift Moscow’s blockade of Ukraine’s Black Sea ports.

Lavrov — meeting officials from Congo, Egypt, and the Arab League on Sunday — said Russia, Turkey, and “another participant to be determined” will use “military naval forces” to escort Ukrainian ships with grain through the Black Sea into the Bosporus.

In fact, the agreement — signed by Ukraine and Russia in parallel documents with Turkey and the UN in Istanbul — is for Ukrainian vessels to escort the ships.

Lavrov’s statement is another indication that Moscow has no intention of observing the deal. Less than 12 hours after it was signed, Russian forces fired four missiles on the Black Sea port of Odesa — two were intercepted but two landed on port facilities.

Turkey’s Defense Ministry said that “coordination between authorities continues for the first ship loaded with grain to start sailing from Ukrainian ports as soon as possible”.

In their latest attacks on the Kharkiv region in northeast Ukraine, Russian forces have destroyed a school and cultural center and injured civilians.

The school and cultural center were levelled in the town of Chuhuiv. Two people were wounded. Three were rescued from rubble, but others are still buried.

Residential areas in the village of Korobochkyne and the towns of Pechenihy and Bohodukhiv were shelled several times.

ORIGINAL ENTRY: Pledging a significant counter-offensive, Ukraine’s forces step up attacks on Russian occupiers of the Kherson region in the south of the country.

The Ukrainian forces have been bolstered by the delivery of 12 US medium-range rocket systems, HIMARS, with the imminent dispatch of another four from the US and three from Norway.

In recent days, Ukrainian fire have damaged all four bridges across the Dnieper River and its tributaries, linking Russian occupiers with their troops in Kherson city to the west of the Dnieper. The Russians have carried out repairs, but the attacks raise the prospect that the invaders will be split.

On Sunday, the Ukrainian forces struck the bridge over the dam at the Nova Kakhovka Hydroelectric Power Plant, damaging the road although passenger vehicles can still cross.

Yesterday and today, the Russian media reported that Ukraine had struck a bridge near the dam in Nova Kakhovka, but there were no confirmation.
Today there are photos of one of the craters and how the Russians are trying to patch up the road. pic.twitter.com/86BB33VipI

Liberation of Kherson By September?

In his nightly video address to the nation, President Volodymyr Zelenskiy said Ukraine’s troops are moving “step by step” into Kherson.

Even the occupiers admit we will win. We do everything to inflict the highest possible damage on the enemy….We will celebrate against all odds. Because Ukrainians won’t be cowed.”

Sergiy Khlan, an aide to the head of the region, went farther on Ukrainian TV, “We can say that the Kherson region will definitely be liberated by September, and all the occupiers’ plans will fail.”

The US-based Institute for the Study of War backed up the assertions, “Ukrainian forces are likely preparing to launch or have launched a counteroffensive in Kherson Oblast as of July 23, but open-source visibility on the progress and tempo of the counteroffensive will likely be limited and lag behind events.”

A Ukrainian official in Kherson said forces have seized settlements, but called on civilians to remain silent about the progress of the counteroffensive until Ukraine’s authorities release official statements.

UK military intelligence added on Monday, “Russian commanders continue to face a dilemma; whether to resource [their] offensive in the east, or to bolster the defence in the west.”

Russia seized Kherson in the opening days of its February 24 invasion. However, the occupiers have struggled to establish control in the face of resistance by residents and attacks, including assassinations and explosions, by Ukrainian partisans.

Trying to assert their authority, Russian occupation officials have said they will hold “referenda” in early September to confirm integration with Russia.