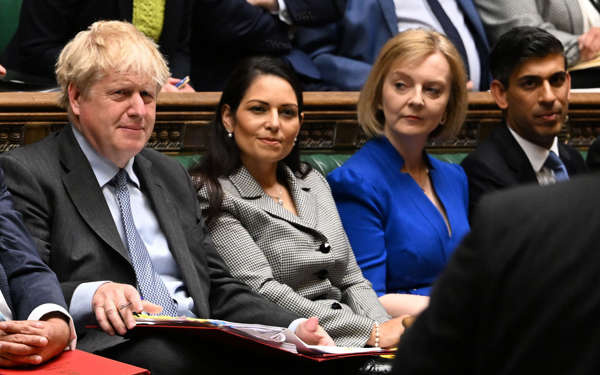 Co-published with the Center for Brexit Studies:

What if the UK’s Tories threw a party to choose a Prime Minister — and Brexit never showed up?

The initial festivities are over, and the Conservative hopefuls to replace the dishonest incompetent known as Boris Johnson are down to two: Rishi Sunak, whose resignation as Chancellor started the final plummet in Johnson’s downfall, and Foreign Minister Liz Truss, who never jumped ship.

Now the gathering chugs along for six weeks as 170,000 Conservative Party members cast their ballots for the inheritor of the garish wallpaper in the flat in 10 Downing Street.

But don’t expect a toast, let alone a requiem, to the UK’s spiral out of Europe apart from the repetition of “Get (A Damaging) Brexit Done”.

Thirty months after the UK left the EU, none of the Tory contenders brought up the substance of Brexit. That’s understandable, given that the substance is April’s drop in GDP by 0.4% with the possibility of subsequent declines confirming a recession. Trade, particularly with Europe, considers to stagger more than Johnson after his stays at Evgeny Lebedev’s Italian castle, and the labour market is still disrupted and distorted. In contrast, Northern Ireland — the one part of the UK still in Europe’s single market — has increased exports to Ireland by 23%, with Ireland enjoyed a 42% boost in exports to the North.

When Sunak mentioned Brexit, it was to rework Johnson’s mantra as “We got Brexit done, now I’ll make Brexit sing” — whatever that means.

He also invoked it as a Gotcha for Truss, “In your past, you’ve been both a Liberal Democrat and a Remainer…Which one [have] you regretted the most?” Truss rambled about going to school in Paisley and Leeds, left-wing activist parents, and “a political journey”, but never once mentioned Brexit, let alone the 2016 referendum.

Truss, ever the political chameleon, has courted the Conservative right and hard-right to get into the final two. So when she has broached Brexit, it has been to boast of her demolition of the Northern Ireland Protocol “in the face of EU intransigence”. In an homage to Orwell, she said the breaking of the Brexit deal and of international law over treaties had been done “in a legal way”, and that the risk of instability across the Irish island was “upholding the Belfast Good Friday Agreement”.

Sunak has not careened so far towards the hard right. While saying the Protocol was a challenge to “stability” and power-sharing in Northern Ireland, he reportedly pushed back against “some of the antics of the government over the Protocol”, urging Johnson not to “blow up” talks with the EU.

But Sunak has not dared state this publicly. Instead, in a gesture to the fire-breathing Brexiteers, he has retreated from the Treasury’s position that the replacement of EU legislation cannot be completed before 2026. Instead, he wrote in The Daily Telegraph that he will have “scrapped or reformed all of the EU law, red tape, and bureaucracy that is still on our statute book and slowing economic growth” by the next General Election in 2024.

The leadership campaign has not been void of economic discussions. To the contrary, Truss has bemoaned “20 years” of decline (without explaining how she does not bear responsibility, as a Cabinet Minister, for that dismal record). Sunak has assailed Truss’s tax-cutting slogans as a “socialism” to the “left of Jeremy Corbyn (without explaining how he does not bear responsibility, as a former Chancellor, for non-socialist stagnation on the verge of recession).

But Brexit has been the Voldomort in these exchanges, never to be named despite its leading part in the UK’s predicament.

Whistling Past A Brexit Graveyard

The absence of Brexit from the discussion is not an absence of significance. To the contrary, it is a testament to the lurching of the Conservative Party to the right, and thus to its inability to escape its self-imposed bind.

Each of the contenders had to undergo an interview by the Brexiteers of the European Research Group, with its 60 to 100 MPs. ERG chair Mark Francois made clear:

It’s critical that whoever the Conservative Party picks as its new Leader, it is someone who really believes in Brexit, in their heart of hearts and does not just mouth the words to try to win the contest.

Only someone who approves of Brexit, as a core belief, is unlikely to bow to any amount of brow-beating by the European Union, be it over the Northern Ireland Protocol…or fishing rights, or indeed anything else.

So it is not just that any would-be Prime Minister has to steer clear of any criticism of Brexit. Even a discussion of its effects is disqualifying. Professor Chris Grey, creator of the Brexit and Beyond site, explains:

Acknowledging that there is damage and that there will continue to be damage, that is unsayable….The ultimate political correctness of the Tory party is that you mustn’t use the B word with any negative connotations. That will get you cancelled as a candidate for the leadership. That will cancel you for good.

At the outset of the contest, Paul Goodman of Conservative Home appealed:

Better sharp questions than ecstatic cheers as a candidate tears up the Northern Ireland Protocol on stage. And louder cheers yet when a second one eats it. And louder cheers still when a third sets fire to it – plus himself, the other candidates…and perhaps you too.

He might as well have whistled past the Brexit graveyard.

The damage, the absurdity, and the evasion were rolled into a tragi-comic moment when Truss, launching her showdown campaign against Sunak, was interviewed on BBC News’s flagship Today programme.

Presenter Nick Robinson challenged Truss over her Remainer past, “Why did you get it so horribly wrong?”

Truss did the required mea culpa, “I was wrong, and I am prepared to admit I was wrong. Some of the portents of doom didn’t happen, and instead we’ve unleashed new opportunities.”

Much has been made of Truss’s subsequent fantasy economic platform with both expanded funding for services and “tax cuts which won’t cause inflation”.

But rewind to the real white-flag moment, which was not Truss’s genuflection but Robinson’s “Why did you get it horribly wrong?” With that line, he made himself — and the BBC — complicit in the graveyard whistling of Brexit.

For the substantive question of Truss should have been:

“Why did you happen to get it so right?”

And that is a question which will never be asked in this Tory leadership contest, in this Conservative Party, or indeed in this sad, declining, fraying Union for a long time to come.