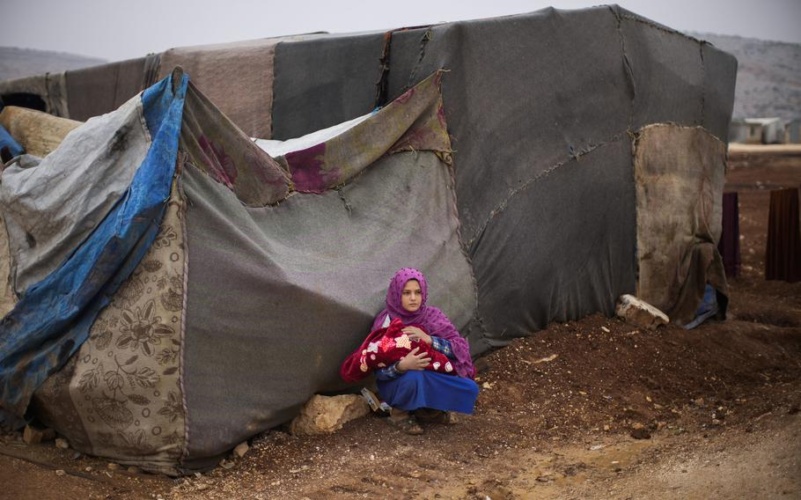 A young Syrian woman holds a baby in a camp for displaced people in Sarmada in northwest Syria, November 25, 2021 (Francisco Seco/AP)

Last Tuesday, after months of Russian threats, the Security Council kept open the last cross-border point for UN aid into Syria — the Bab al-Hawa crossing from Turkey into the northwest Syrian province of Idlib.

But this is only a six-month reprieve for the estimated 4 million people in the area. Moscow blocked a renewed mandate for 12 months, or even nine. So the mandate will expire in January 2013, when the millions will face the prospect of no food, poor water, and inadequate shelter in a freezing winter.

And of course there is no prospect that Russia will ever lift its veto to reopen the other three crossing points it has closed: another from Turkey into the northwest, and two from Iraq into Kurdish-controlled northeast Syria.

On July 9, Mark Cutts, the Deputy Coordinator for Humanitarian Aid in Syria, tweeted:

Deeply concerning that the Security Council was not able to reach consensus in its latest meeting. But still hoping it will reach agreement on an extension. It’s not over yet… pic.twitter.com/np4oIaSzUR

Even though Resolution 2642 for cross-border assistance was put back into force on Tuesday, Monday was a dark day for all those affected.

At a stroke, $423 million of aid, the amount earmarked by the UN for north-west Syria up to the end of 2022, would have been cut off. For the people who live there, this means hunger in a part of the country that is home to twice as many people as before the war.

The idea that supplies could be effectively channelled via Damascus, as called for by Russia, is entirely illusory. This became quite clear between 2012 and 2018, when the Syrian regime laid siege to millions of people, withholding food and medical provisions from them. Only a fraction of the supplies ordered by the UN was ever delivered: the list of requirements was rewritten, and some of the most basic critical supplies removed from the convoys, such as sterile gloves and medicines to treat pneumonia and diarrhoea. Syrians needed antibiotics, but what they got instead was headlice shampoo.

In 2014, the Security Council unanimously agreed on a resolution to ringfence cross-border humanitarian aid. But ever since the Assad regime took back control of rebel-held areas in 2018, Russia has taken every opportunity to squeeze the mandate/ It has already had three of the four original border crossing points closed in previous rounds of negotiations. The extension of the mandate for Bab al-Hawa was agreed only at the eleventh hour in summer 2021, following a nerve-wracking wait.

Russia decreed that there should be progress reports on supplies across the lines of the conflict and particular emphasis on “early recovery” — in other words “projects in the early phase of renewal”, going beyond humanitarian aid, but not as far as reconstruction. Moscow’s priority is to promote “normalization” with the Assad regime. Syria should no longer be perceived as a war zone, to be steered well clear of by investors.

As the coordinator of an international aid organization in Turkey puts it: “Moscow would like to move away from ‘protection language’ with the implication that the people in Syria continue to be in need of protection. It wants to start talking of Syrian in terms of a post-war country.

He considers it unrealistic for UN aid to be channelled any other way:

The aid from Turkey came in more than 1000 trucks. From the regime-controlled areas, there were maybe between 25 and 40, if that — that is a mere drop in the ocean.

Another problem was the complete lack of effort to coordinate with us. This means that some deliveries went to places we had already supplied, because there was also a lack of expertise and analysis on the part of the regime as to what was needed and where.

It’s Not Just About Food

This is about far more than questions of logistics or delivery of food. The aid coordinator explains:

Education and other sensitive areas can also be supported across borders, but not across lines of conflict. Nor can healthcare or anything that comes under the heading of protection in its broadest sense.

This calls for trust and there is precious little of that for the regime and the Syrian Arab Red Crescent. The aid transport out of Damascus is also a point of disagreement at the moment, as it provided the regime with insights and access to sensitive information.

Sexualized violence, violence against women and girls, and child marriages are also unlikely to be addresses by existing programmes of aid across conflict lines.

The Assad regime is extremely interested in ensuring that all UN aid is channelled through Damascus – but not in helping it any farther. Syria expert Natasha Hall cites the regime’s “unbelievably systematic way of siphoning money before it can even be used”. In an extensive study, Hall revealed last year that more than 50% of the resources that enter Syria end up directly in the coffers of the regime through a dodgy currency exchange policy, never benefitting those in need of the aid. Of the assistance left after the currency exchange, 60% to 80% goes to the Syrian Arab Red Crescent, with its close ties to the regime, and the aid organizations of the President’s wife, Asma al-Assad. Areas considered loyal get relief, while others are deliberately neglected.

The Security Council’s acceptance of the Russian counter-proposal, instead of the one-year extension called for by 13 of the 15 members of the Security Council, means that current planning work can only go as far as January 10. This could strand more than a million people living in tents that are not winter-proof.

Instead of sitting back and waiting for another fight to break out with Russia over every dot and comma, it is time to put an end to this toxic dependency on Russia’s blessing once and for all. Repeatedly waiting for the party that bears much of the military responsibility for Syrians’ suffering to rubber-stamp the provision of humanitarian aid — that is an absurd situation.