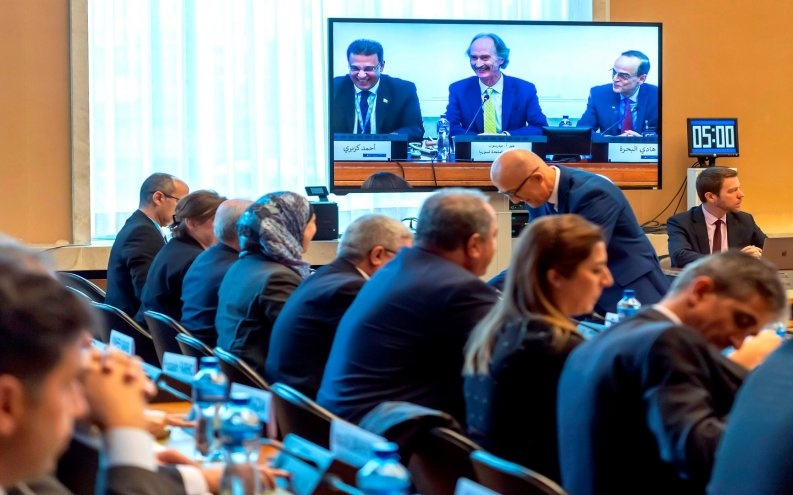 Russia has vetoed renewal of UN-brokered talks on a new Syria Constitution.

When the UN announced the postponement of the negotiations in Geneva almost two weeks ago, it was thought that the Assad regime had withdrawn.

However, UN envoy Geir Pederson briefed the UN Security Council behind closed doors Thursday that the “unfortunate and disheartening” postponement “results from matters unrelated to the Syria file”.

He said an Assad regime representative told him that Damascus will only participate in the next round of talks “when what he described as requests made by the Russian Federation have been met”.

Moscow is objecting to Geneva as the site of the talks, declaring that Switzerland is not neutral over Vladimir Putin’s invasion of Ukraine.

Pedersen “urged all parties to firewall the Syrian process from the impact of the conflicts elsewhere in the world and put the interest of Syrians first”.

A UN spokeswoman note that when the idea of a Constitutional Committee was conceived, one of the conditions was that it “would hold its meetings in Geneva without foreign interference”.

ORIGINAL ENTRY, JULY 19: The Assad regime has pulled out of the UN-brokered talks on Syria’s Constitution, with the ninth round scheduled for Geneva on July 25-29.

The regime used the pretext that Switzerland is no longer neutral because it has supported European Union sanctions against Russia over Vladimir Putin’s invasion of Ukraine.

UN deputy spokesperson Farhan Haq did not explicitly refer to the regime’s pretext but said, “We do reaffirm the neutrality of Switzerland as a venue for much of the work that the United Nations does….Discussions on Syria need to be kept as much as possible separate and apart from discussions on other topics.”

The UN envoy for Syria, Geir Pedersen, said in a statement that all parties should be “protecting and firewalling the Syrian political process from their differences elsewhere in the world”. He called on them “to engage in constructive diplomacy” and said he would continue to meet them “and provide more information in due course”.

Haq said, “At this stage, I don’t have any other venue…and we will see what happens next.”

A conference in January 2018 agreed on a 150-member committee to pursue a new constitution, with a 45-member panel to carry out the drafting. Each has equal representation from the regime, the opposition, and civil society.

But the regime has held out against any substantial discussions, saying that “sovereignty” and a fight against “terrorists” — its label for opposition groups — must be paramount. The committee was not formed until September 2019, and eight rounds of talks have not been able to overcome the regime’s posture to agree an agenda.

Last October, Pedersen finally broke his policy of avoiding any criticism of the regime’s delay and stonewalling, following its refusal to engage with draft text at the first meeting in Geneva in nine months.