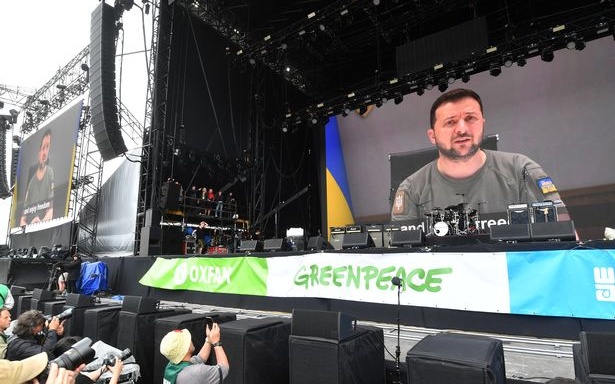 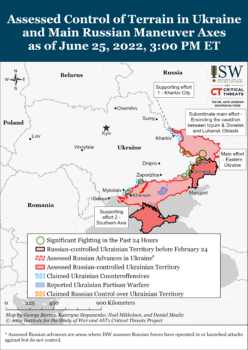 Russia also fired missiles near Cherkasy in central Ukraine on Sunday, hitting a bridge across the Dnipro River connecting the frontline in the east with the west of the country.

“Today, the enemy launched missile attacks on the Cherkasy region. There are 2 strikes near the regional centre. One dead and five wounded. Infrastructure damaged,” said regional governor Ihor Taburets on the Telegram app.

The #G7 states should respond to new Russian terror attacks on 🇺🇦 cities. Sanctions should be more aggressive. We appreciate embargo on RF gold exports, but gas embargo should be included in the new 🇪🇺 sanctions package.

The BBC’s Myroslava Petsa notes the connection between high-profile Russian missile strikes and headline interventions over Moscow’s invasion of Ukraine.

Putin hit Lviv as Biden was giving a speech in Warsaw.
Putin hit Kyiv when Guterres was in the city after Bucha trip.
Putin hits Kyiv on a massive scale as G7 leaders are gathering in Elmau for a summit.
And he's going to do it over and over again. This is his way of negotiating

At least one person has been killed and five wounded in Russia’s missile strikes on Kyiv on Sunday morning.

The fatality was a man whose wife and 7-year-old daughter were injured. A Russian woman is among the wounded.

An initial volley of four missiles was followed by four more. There are reports of another two explosions.

Ukraine Foreign Dmytro Kuleba responded that Sunday’s summit of G7 nations “must respond with more sanctions on Russia and more heavy arms for Ukraine. Russia’s sick imperialism must be defeated.”

Former Swedish Prime Minister Carl Bildt noted, “It’s difficult to see this morning’s missile attack against residential areas of Kyiv as anything but a deliberate Russia escalation and a signal to the G7 meeting in Elmau [in southern Germany] today.”

Another victim was taken out from under the rubble of a building in Kyiv – probably the mother of a 7-year-old girl who is already in hospital.

Russian missile hit a residential building in the Ukrainian capital Kyiv. One dead. A kid was saved from under the rubble. Ironically a Russian citizen who was in this building also suffered. There are more wounded #StopPutin #StandWithUkraine pic.twitter.com/B88JKv3smG

The UK, US, Canada and Japan are banning imports of Russian gold.

Russia earned $15.2 billion from the exports in 2021, and Moscow has stepped up the transactions since the invasion of Ukraine. London is a major hub for the business.

In late March, she walked into a supermarket on in St. Petersburg with her guitar and placed tiny stickers about the war on top of price tags. They informed shoppers that “the Russian army bombed an art school in Mariupol where about 400 people were hiding from shelling” and that “weekly inflation reached a new high not seen since 1998 because of our military actions in Ukraine”.

A customer notified police and Skochilenko was arrested. She was charged with spreading disinformation about the military “motivated by hate”.

Skochilenko has been bullied in prison and faced sexual aggression. She was initially in a freezing cell with 17 other people, with a broken toilet and a leaking roof. She was moved to a cell for six inmates, where she was tormented by the other prisoners. For weeks, she was denied the gluten-free diet needed because of her celiac disease.

But the musiciian persists. “My detention and the cruelty to me has made my act public and given it such magnitude,” she said in comments conveyed by her lawyer.

Citing “current and former officials”, The New York Times reports that CIA personnel and a “few dozen” commandos from NATO countries such as Britain, France, Canada, and Lithuania are covertly working with Ukrainian forces inside the country.

Just after Russia’s invasion on February 24, the US Army’s 10th Special Forces Group quietly established a coalition planning cell in Germany to coordinate military assistance to Ukrainian commandos and other Ukrainian troops. The cell now has officials and troops from 20 nations.

US Army Secretary Christine Wormuth said last month at a national security event that the cell is managing the flow of weapons and equipment in Ukraine: “As the Ukrainians try to move that around and evade the Russians potentially trying to target convoys, you know, we are trying to be able to help coordinate moving all of those different sort of shipments.”

The commandos are not on the front lines, but advise from headquarters in other parts of the country or remotely by encrypted communications.

The CIA officers, largely based in Kyiv, are directing the intelligence that the US is sharing with the Zelenskiy Government and its military.

For the first time, Russian forces have reportedly fought within the city limits of Lysychansk, the last major Ukraine-held area in the Luhansk oblast in eastern Ukraine.

The forces were said to have reached a mine and a gelatin factory on the city’s outskirts, a claim backed by NASA data of heat anomalies.

Andrei Marochko, a Russian proxy official, said on Saturday, “The people’s militia of the Luhansk People’s Republic and the Russian army have entered the city of Lysychansk. Street fighting is currently taking place.”

The military said the bombers’ use of Belarusian airspace is “directly connected to attempts by the Kremlin to drag Belarus into the war”.

Mayor Vitali Klitschko said the explosions were in the historic Shevchenkivskiy district, with universities, restaurants, and art galleries. Two people have been hospitalized, and others are trapped in the rubble of a nine-story building, on fire and with three upper floors partially destroyed.

#Russia bombs an apartment building in Kyiv on a Sunday morning. #Ukrainepic.twitter.com/LXnkLoLR5E

The Russian strike was the first in almost three weeks on Kyiv. However, the Shevchenkivskiy district, was also attacked on April 28, while UN Secretary General António Guterres was visiting the capital. A Ukrainian journalist, Vera Hyrych, was killed.

Kyiv regional governor Oleksiy Kuleba said another missile was downed, with fragments falling on the outskirts of a village.

ORIGINAL ENTRY: President Volodymyr Zelenskiy says Ukraine will win back all Russian-occupied territory in eastern and southern Ukraine, including the city of Sievierodonetsk.

In his nightly video address to the nation, Zelenskiy said, “All our cities – Sievierodonetsk, Donetsk, Luhansk – we’ll get them all back. Every week we ensure Kherson. Melitopol, Berdyansk, Enerhodar, and Mariupol are never forgotten.”

The remark was Zelenskiy’s first and only mention of Sieverodonetsk in the Luhansk oblast, levelled and seized by Russian forces after 3 1/2 months of attacks.

Regional and local officials confirmed on Thursday that Ukrainian defenders were withdrawing from Sieverodonetsk. Its sister city of Lysychansk, across the Siverskyi Donets River, is also under pressure from Russian shelling and an advance from the south.

The cities are the last two that were held by Ukraine in Luhansk.

Zelenskiy noted that Ukraine had been struck by 45 Russian missiles and rockets in the last 24 hours — with more downed by anti-air defenses — and said:

At this stage of the war it’s spiritually difficult, emotionally difficult….We don’t have a sense of long it will last, how many more blows, losses and efforts will be needed before we see victory is on the horizon.

The President asked again for more weapons from the international community, saying that Russia’s escalating missile attacks established that sanctions on Moscow are not enough.

The air defense systems – the modern systems that our partners have – should not be on training grounds or in storage, but in Ukraine, where they are needed now, needed more than anywhere else in the world.

Earlier in the day, Zelenskiy told the crowd at the UK’s largest music festival, Glastonbury, “Spread the truth about Russia’s war. Help Ukrainians who are forced to flee the war….The more people join us in defending freedom and truth, the sooner Russia’s war in Ukraine will end.”