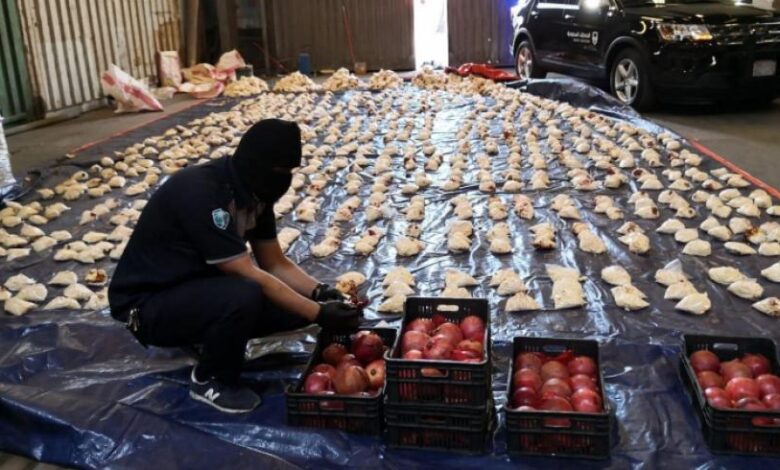 Germany’s Der Spiegel publishes the latest revelations about the Assad regime’s involvement in Syria’s drug trade, highlighting the German investigation of a shipment from Syria to Saudi Arabia via Romania in April 2020.

Hidden inside refrigeration units were 2.1 million Captagon pills with an amphetamine content of 11.5% and a street value of €43.5 million ($46 million). A Syrian businessman, “Iyad C.” — originally from Latakia in western Syria but now living in Germany — two other Syrians, and an Algerian have been indicted and will soon be tried in a court in Essen.

Much of the Captagon is moved across the Syria-Jordan border. Jordanian officials say the Assad regime, its ally Lebanon’s Hezbollah, and Iran are all inolved. Col. Mustafa Hiari, the Jordanian Army’s spokesperson, declared on State TV in May:

We are facing a war along the borders, a drugs war and led by organisations supported by foreign parties. These Iranian militias are the most dangerous because they target Jordan’s national security.

Tracking A Cartel Back to Assad

The German investigators began the path to the Assad regime through Iyad C’s accomplice, Mohamad B. He lives in Germany’s Ruhr Valley; however, with his connections, he lived in one of the best neighborhoods in Damascus — until he cheated his business partners and had to flee. In an intercepted phone conversation, he bragged about his ongoing, excellent ties to the Assad clan.

Then there is Iyad C.’s import-export business in Latakia, the Syrian port on the Mediterranean. Prosecutors say they have proof that the 4th Army Division, once led by Bashar al-Assad’s brother Maher, is paid $300,000 for every container shipped out of Latakia, with another $60,000 paid to soldiers who ensure the shipments are not blocked.

The US-based New Lines Institute estimates that the total value of Captagon shipments was at least $5.7 billion in 2021, compared to the $860 million of all of Syria’s legal exports in 2020. Western think tanks and intelligence agencies assess that, considering shipments which have not been tracked, total profits are in the two-digit billions.

A businessman who has fled Syria told Der Spiegel of the Latakia factories: “They produce in industrial quantities. The entire compound is patrolled by armed guards.” A former Syrian drug investigator, a regime militia commander and a watchman from the factory confirmed the claim.

As Iyad C. and his accomplices face their trial, Joel Rayburn, the former US special envoy for Syria, summarizes the stakes:

I believe the Assad regime would not survive the loss of the Captagon revenues.

They are the cartel.