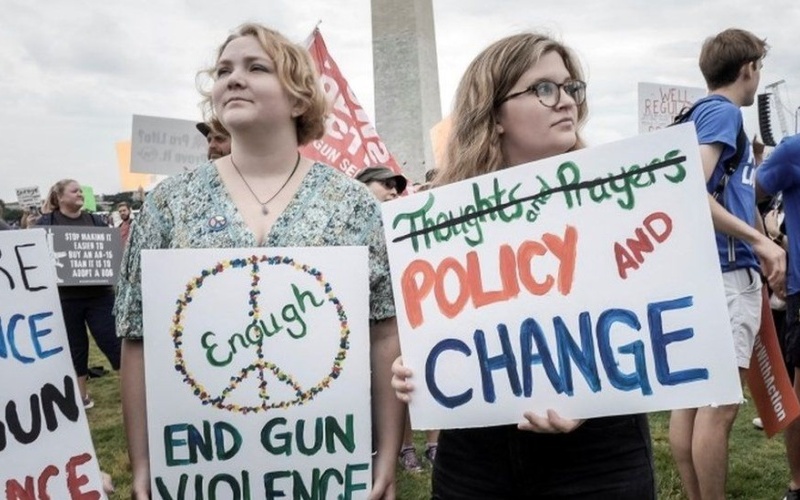 “God willing, it’s going to save a lot of lives,” Biden said.

He noted the legislation is far short of what is necessary, but said it does address some long-standing priorities: “When it seems impossible to get anything done in Washington, we are doing something consequential.”

ORIGINAL ENTRY, JUNE 24: The US Senate has approved the first legislation on gun control in almost 30 years, in a 65-33 vote for limited measures such as background checks on buyers under 21 and incentives for states to take guns from dangerous owners.

But earlier on Thursday, the Supreme Court struck down a New York law limiting who can carry guns outside the home.

The Court’s ruling is likely to prompt a series of lawsuits against state and federal provisions. California, Hawaii, Maryland, Massachusetts, and New Jersey — states where 25% of Americans live — will have to rewrite their laws.

“A Long Overdue Step in the Right Direction”

After the latest series of mass shootings, including the killing of 19 children and two teachers at an elementary school in Uvalde, Texas, the Senate bill was drafted by a group of 10 Democrats and 10 Republicans.

Fifteen Republicans, including Minority Leader Mitch McConnell of Kentucky, voted with all 50 Democrats to break the long-standing GOP filibuster preventing any legislation.

The legislation enhances background checks for prospective gun buyers who are between 18 and 21. Juvenile records, including mental health records from age 16, may be vetted.

The support of “red flag” laws allows guns to be temporarily confiscated from any person deemed by a judge to be too dangerous to own a weapon. A federal ban on domestic abusers buying firearms is extended to partners as well as spouses, and laws against trafficking of guns are strengthened.

The bill, which goes to the House for confirmation on Friday morning, includes hundreds of millions of dollars in funding for mental health programs and enhanced security in schools.

Majority Leader Chuck Schumer of New York said on the Senate floor after the vote, “This is not a cure-all for all the ways gun violence affects our nation, but it is a long overdue step in the right direction. It’s significant — it’s going to save lives.”

President Joe Biden said in a statement, “Families in Uvalde and Buffalo, and too many tragic shootings before, have demanded action. And tonight, we acted. This bipartisan legislation will help protect Americans.”

McConnell, who had barricaded most Democratic legislation during the Obama and Biden Administrations, praised the Democrats for accepting limited steps, saying they were “willing to give up their wish list”.

He also indicated that his priority was not to lose votes in November’s mid-term elections, rather than any principle or desire to reduce violence and killings:

It’s no secret that we’ve lost ground in suburban areas. I hope it will be viewed favorably by voters in the suburbs we need to regain to be in the majority next year.

Most Republicans held out against any measures. Sen. Ted Cruz of Texas, a possible Presidential candidate in 2024, and Sen. John Barrasso of Wyoming, the third-ranking Republican, tried to strip out all gun-related provisions and leave only mental health and school safety programs.

His position echoed that of the National Rifle Association, which said the legislation “does little to truly address violent crime while opening the door to unnecessary burdens on the exercise of Second Amendment freedom by law-abiding gun owners”.

The Supreme Court’s 6-3 decision reflected the power of the six conservative justices to set the agenda on social issues as well as blocking attempts to deal with gun violence.

Writing for the majority, Justice Clarence Thomas declared that the priority was “an individual’s right to carry a handgun for self-defense outside the home”.

While Thomas said states might continue to prohibit guns on sites like schools and government buildings, the ruling did not indicate when such bans will be allowed.

Two of the six conservatives — Justice Brett Kavanaugh and Chief Justice John Roberts — did not go as far in a concurring opinion. They said states are generally free to require “fingerprinting, a background check, a mental health records check, and training in firearms handling and in laws regarding the use of force”.

Within minutes of the ruling, Gov. Kathy Hochul of New York said she will reconvene the Legislature as early as next month for new measures to maintain regulation of guns. Democratic legislators in Maryland also indicated they will rewrite existing provisions.

President Biden said he was “deeply disappointed” in a ruling which “contradicts both common sense and the Constitution and should deeply trouble us all”.

The share prices of firearms manufacturers rose on Wall Street on Thursday, with Smith & Wesson’s climbing more than 9%.