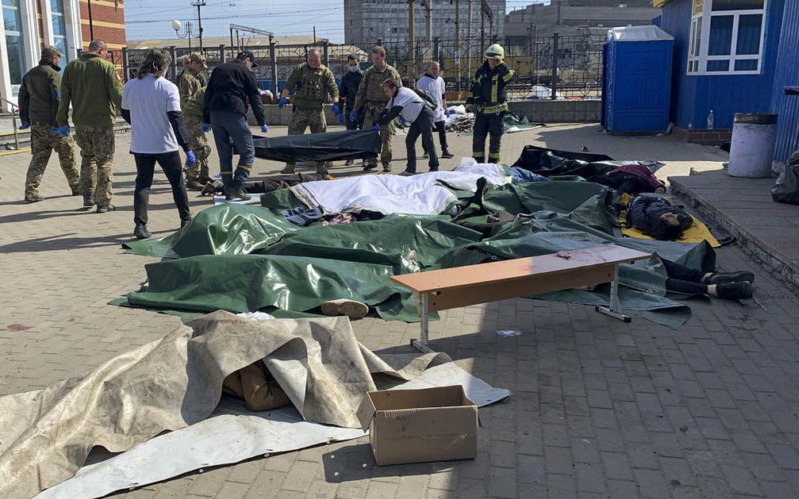 Covered bodies of some of the 57 victims of Russia’s missile attack on the railway station in Kramatorsk in eastern Ukraine, April 8, 2022. Evidence indicates banned cluster munitions were used in the mass killing. (CBS News) 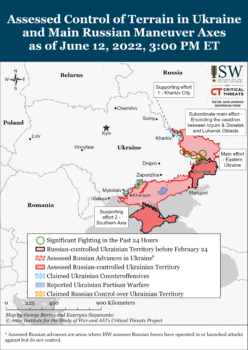 Speaking to the African Union, Ukraine President Volodymyr Zelenskiy has said Africa is a “hostage” of Russia’s “colonial” war and its exacerbation of global food shortages.

Zelenskiy assured the audience that Ukraine is engaged in “complex negotiations” over Russia’s blockade of grain exports through Black Sea ports.

This war may seem very distant to you and your countries. But the food prices that are catastrophically rising have already brought [the war] to the homes of millions of African families.

The unjust level of food prices, which has been provoked by the Russian war, is being painfully felt on all continents. Unfortunately, this can be a particular problem for your countries.

Zelenskiy said there has been “no progress yet because no real tool has yet been found to ensure Russia does not attack [Ukrainian ships] again. That is why the food crisis in the world will continue as long as this colonial war continues.

A food warehouse in Odesa is the latest to be destroyed by Russian missile attacks.

Two weeks ago, the Russians demolished one of Ukraine’s largest storage facilities in Mykolaiv, also in the south of the country.

The Russian Ambassador to the UK, Andrey Kelin, has been formally banned from the Houses of Parliament “until further notice”.

There has been an informal ban on all Russian diplomats and officials in the UK since Vladimir Putin’s invasion on February 24.

The Ukraine Parliament voted on Sunday to forbid printing of books by post-1991 Russian citizens unless they give up their passport and take Ukrainian nationality.

The measure bans the commercial import of books printed in Russia, Belarus, and Russian-occupied Ukrainian territory, and requires special permission for the import of books in Russian from any other country.

Another law prohibits the playing of music by post-1991 Russian citizens on media and on public transport, and increases quotas on Ukrainian-language speech and music content in TV and radio broadcasts.

Ukraine Culture Minister Oleksandr Tkachenko said, “The laws are designed to help Ukrainian authors share quality content with the widest possible audience, which after the Russian invasion do not accept any Russian creative product on a physical level.”

Russian shelling of areas in and near Kharkiv, Ukraine’s second city, injured eight civilians, including three children, on Sunday.

Kharkiv Governor Oleg Syniogubov said Russian forces fired a missile at an educational institution and an oil refinery, causing a blaze which firefighters are still battling.

Russia exported a record 8.42 million tons of discounted crude oil to China in May.

The movement of 1.98 million barrels per day was an increase of more than 20% from 1.59 million bpd in April.

We call on Russia to deblockade the ports….It is inconceivable, one cannot imagine that millions of tonnes of wheat remain blocked in Ukraine while in the rest of the world people are suffering hunger.

This is a real war crime, so I cannot imagine that this will last much longer.

Borrell and EU foreign ministers will discuss the situation on Monday in Luxembourg.

The railway tracks need to be modernized, we need the right cargo wagons – the German government is working on this with many other actors.

It is clear that, in the end, we will certainly not be able to get out all grain but if we even just manage to free part of it, on various routes, then this will help as we are facing this global challenge.

In his nightly video address to the nation, Ukraine President Volodymyr Zelenskiy warned of Russian attacks in response to the European Commission’s approval of Kyiv’s candidacy for European Union membership.

Obviously, this week we should expect from Russia an intensification of its hostile activities. And not only against Ukraine, but also against other European countries. We are preparing. We are ready. We warn partners.

Thank you for the tens of thousands of second birthdays you gave to our military, our civilians, our Ukrainian children. Thank you for saving lives on the front, in hospitals across our country.

He spoke of farmers “who defended their communities even with bare hands when stopping the Russian military” and who continued to sow their fields.

ORIGINAL ENTRY: A New York Times investigation establishes Russia’s widespread use of banned weapons, including cluster munitions, in its invasion of Ukraine.

Examining more than 1,000 photographs and visual evidence from Ukrainian agencies, the Times identified more than 450 cases with more than more than 2,000 identifiable munitions, a “vast majority of which were unguided” and killed indiscriminately.

More than 210 of the weapons were types that have been widely banned. All but a handful were cluster munitions. More than 330 other weapons were used on or near civilian structures. About one-fifth were documented outside of areas where Russian troop are present, indicating that many were used at maximum range.

The Times notes that their numbers are likely to underreport the use of the banned munitions.

While it is possible that some of the weapons may have been fired by Ukrainian forces defending against the invasion, the newspaper notes that its “evidence points to far greater use by Russian forces”.

Mike Newton, a Vanderbilt University law professor involved in prosecution of war crimes, explains, “The Russians have violated every single one of those principles [under international humanitarian law] almost daily. The law of war is far more demanding than the rule of simple expediency and convenience. Just because I have a weapon doesn’t mean I can use it.”

The International Criminal Court’s chief prosecutor has opened a formal inquiry into Russian operations in Ukraine. Targeting of civilian structures or indiscriminately bombing of populated areas, could be found to constitute a war crime.

The evidence compiled by The Times establishes hundreds of munitions near houses and apartment buildings, and dozens in or near schools. They were also documented close to churches, cemeteries, farms, medical facilities, and playgrounds.

International human rights organizations have investigated the Russian use of cluster munitions. Human Rights Watch summarized in early May that hundreds of attacks had been documented or reported in eight of Ukraine’s 24 oblasts: Chernihiv, Dnipropetrovsk, Donetsk, Kharkiv, Kherson, Mykolaiv, Odesa, and Sumy.

HRW found that at the outset of the invasion in late February, a Russian ballistic missile with submunitions struck near a hospital in Vuhledar, killing four civilians and injuring 10, including health care workers. About the same time, cluster munitions fired into residential areas in Kharkiv killed at least three civilians.

Amnesty International reported on a cargo rocket that dropped bomblets on a nursery and kindergarten in Okhtyrka in northern Ukraine, killing three people, including a child, and wounding another child.

In one of the largest mass killings of the invasion, Russia fired a Soviet-era Tochka-U missile, which can fitted with a cluster warhead carrying 50 bomblets, on the Kramatorsk railway station on April 9, killing 57 civilians. A BBC investigation found evidence that cluster munitions were used, including “clear patterns on the ground” and a “sound pattern” consistent with the banned weapon.

I think what we’re seeing here with the Russians is kind of like what you’d see back in World War II, where they just bomb the hell out of people.

The most surprising thing is, I guess, their philosophy on trying to break the will or the spirit of the Ukrainian people by just leveling large sections or entire towns. This is what war used to look like, and they just brought it back center stage. And people, I think, are horrified.