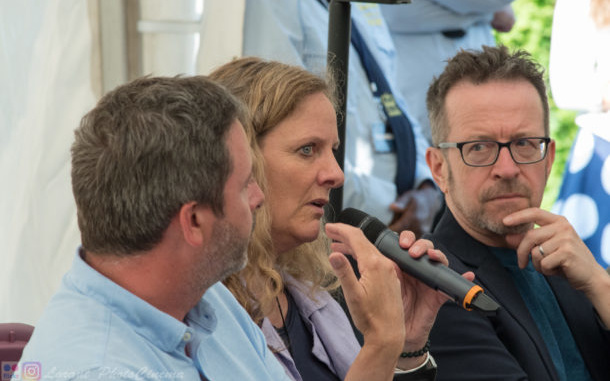 Welcome to a parallel reality, where facts are batted away and conspiracies abound.

Listen to “Ukraine: The Information War”

In addition to setting out students’ criticisms of Hayward, the documentary critiques Schlosberg’s “misinformation” over the killing by Russian troops of hundreds of civilians in Bucha, northwest of Kyiv.

ORIGINAL ENTRY, MAY 31: For years Tim Hayward, a professor of environmental political theory at the University of Edinburgh, has faced criticism of spreading disinformation and conspiracy theories in his social media posts, tweets, and academic articles.

Hayward has been repeatedly challenged over his claims about the 11-year conflict in Syria, especially after Russia’s military intervention from 2015 to save Syrian leader Bashar al-Assad.

He is a founding member of the “Working Group on Syria, Propaganda, and Media” which has loudly denied war crimes, including the Assad regime’s deadly chemical attacks, and attacked Syrian activists and White Helmets rescuers. One WGSPM founder is a 9-11 “truther” promoting the conspiracy theory of a US inside job. Members have been in contact with Russian officials, and one had an extensive e-mail exchange with a person whom he thought was a Russian spy, asking “Igor” for information to discredit activists, academics, and journalists.

Now Hayward’s students at Edinburgh say he is using his courses to push his disinformation about Syria.

And they say he has extended this to Russia’s invasion of Ukraine, retweeting the disinformation of Russian officials to cover up war crimes — including the Russian bombing of a children’s hospital and maternity ward in Mariupol.

Chloe Hadjimatheou, Anna Meisel, and Hazel Shearing summarize the findings in their documentary — to be broadcast on Tuesday night — on BBC Radio 4’s File on 4 Later.

Mariangela Alejandro, a history and politics student, had high expectations when she enrolled in Hayward’s course on “Justice and Citizenship”.

But she says that a few weeks into the course, she said things started to get “weird”: “He goes from talking about global financial markets [and] poverty, into this realm of conspiracy theories about [Syrian leader Bashar al] Assad and Russia.”

In lectures obtained by the BBC, Hayward promotes his conspiracy theory to discredit the White Helmets civil defense — an initiative he has pursued for years alongside Vanessa Beeley, an activist embedded with the Assad regime, and in parallel with Russian officials — asserting that the rescuers may have helped fake the April 2018 chorine attack in Douma, near Syria’s capital Damascus.

In his lecture, Hayward assails the formal report of the Organization for the Prohibition of Chemical Weapons, finding “reasonable grounds” that chlorine was used in a building where 43 people were killed.

He then sets up a “he said, she said” argument to claim equal authority for his conspiracy theory.

One narrative says the White Helmets helped rescue victims, provided evidence and gave witness statements about the chemical attack on Douma on 7 April 2018.

The critics say the White Helmets were responsible for staging a false flag event to spur the West to attack the Syrian government. In fact, dispute about this case is still current.

Mariangela Alejandro said she left the lecture thinking it “could be true” that the Douma attack was staged by the White Helmets, until she spoke to a Syrian friend.

Responding to the BBC, Hayward asserted that he is just lecturing about whether a claim should be accepted on the basis of an organization’s or individual’s authority. He said he made it clear to student that this also applied to him.

But Alejandro explains, “He essentially frames [Syria] as…’the Working Group is saying the truth, and they’re not listening to us’.”

How We “Lose Our Humanity” On Ukraine

Kvitka Perenents, a Ukrainian student at the University of Edinburgh, was anxiously following news of the Russian invasion of her home country when she saw Hayward’s retweets describing the bombing of the Mariupol hospital as #fakenews.

One retweet was of a Russian representative to the UN declaring that there were no patients in the hospital — in fact, at least five women and children were killed or died afterwards — and that the Ukraine military was using it as base.

Hayward told the BBC, “I stand by the statement that I appended to that tweet, which is that we should strive to hear both sides.” He continues to suggest that it is “uncertain” whether the maternity hospital was bombed by Russian warplanes.

Kvitka Perenents rejected Hayward’s “both sides” line: “The moment we start to sort of equate the two sides in the story is the moment we lose our humanity. The oppressor — in this case, Russia — should not be given the same kind of platform as those who are being oppressed.”

“He couches his lecture in the language of global justice and citizenship, purporting to be objective,” Hashemi told the BBC. “He’s really engaged in, I think, a deeply distorted set of teachings.”

University of Edinburgh officials maintained that while committed to “academic freedom”, they take “a strong view…against the spread of misinformation” and encourage students to report concerns.

However, they supported Hayward’s declaration that his tweets and involvement with the “Working Group, Syria, Propaganda, and Media” are completely separate from his academic work and responsibilities.

Jamie Hepburn, Scotland’s Higher and Further Education Minister, told the BBC that “attempts by anyone to repeat” Russian disinformation about Ukraine are “unacceptable”. But he said universities “are solely responsible for internal institutional matters such as the conduct of their staff”.

Where the “Working Group” is Now

Since the activities of Hayward’s “Working Group” were first revealed in spring 2018 — as he and his colleagues were denying the Douma chemical attacks — most of its leading members have dispersed.

Piers Robinson, the 9-11 truther and Coronavirus denier, left the University of Sheffield and is now in Berlin, where he has been in contact with a Russian official over campaigns.

Paul McKeigue, the University of Edinburgh mathematician who denied the April 2017 sarin attack in northwest Syria that killed about 90 civilians and wounded hundreds, has dropped out of public view after his e-mails with the “Russian spy” were revealed.

David Miller has been dismissed by the University of Bristol after complaints about anti-semitic material in his lectures. He now presents the program “Palestine Declassified” for Iran State outlet Press TV.