Capitol Attack Hearings: Trump Wanted to Lead Supporters in Invasion, “I Don’t Fucking Care That They Have Weapons” 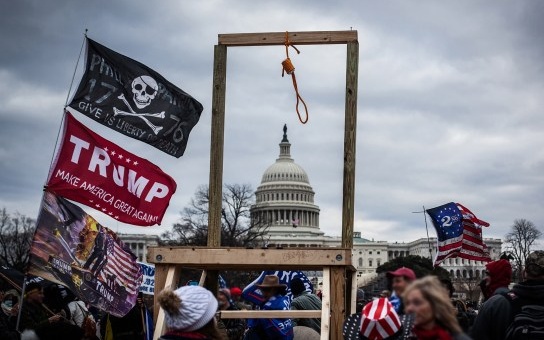 In her testimony to the House committee on the Capitol Attack, White House official Cassidy Hutchinson pointed to the extent of the planning within the Trump camp.

She said that on the evening of January 5, her boss White House Chief of Staff Mark Meadows spoke with Donald Trump’s unofficial advisors Roger Stone and Michael Flynn.

Stone, Trump’s long-time political fixer, was being escorted around Washington by right-wing militia and reportedly hoped to enter the Capitol with them.

Hutchison said Meadows wanted to go that evening to the Willard Hotel, where the Trump camp had its “war room” for the January 6 rallies. She advised him that it was “not a smart idea” as “it was not appropriate for a White House Chief of Staff to attend”.

Meadows persisted, but finally said he would telephone the war room instead.

ORIGINAL ENTRY: In dramatic testimony, a White House official tells the House select committee on the Capitol Attack that Donald Trump not only supported the crowd, but wanted to lead the invasion trying to prevent Joe Biden becoming the 46th President.

Cassidy Hutchinson, an assistant to White House Chief of Staff Mark Meadows, said in a specially-convened session that Trump knew on the morning of January 6 of his supporters carrying weapons. Hours later, after telling a crowd outside the White House to march to “Stop the Steal”, he tried to seize the wheel of his Presidential limousine and drive it to the Capitol. When a Secret Service agent said it was not possible, Trump assaulted him, trying to grab his collarbone.

Hutchinson also explained that Trump, told about the attackers calling for the execution of Mike Pence, said that “maybe” his Vice President “deserved it” for refusing to block the Congressional certification of Biden’s Electoral College victory.

Trump also sought, in his statement about the insurrection, to include a passage pardoning the attackers.

“They’re Not Here to Hurt Me”

Hutchinson’s testimony supported the build-up of House hearings detailing Trump’s falsehoods about the election, his plotting with an inner circle to pressure state officials and then the Justice Department to throw out the vote, and finally the plan for the rallies to prevent the Congressional certification.

Hutchinson said Trump was told about 10 a.m. that his supporters had come to the White House rally armed with weapons. He dismissed the warning. Instead, disappointed at the size of the crowd, he demanded that metal detectors be removed.

He was angry that we weren’t letting people through the mags [magnetometers] with weapons. I overheard the President say something to the effect of “You know, I don’t fucking care that they have weapons. They’re not here to hurt me. Take the fucking mags away. Let my people in.

“Two or three minutes later”, Trump addressed the audience, “We are going to walk down [to the Capitol] and I’m going to be there with you.”

As he left the stage at the Ellipse, Trump returned to his motorcade believing he would be taken to the Capitol. He entered his armored Presidential vehicle, “The Beast”, but was told by Robert Engel, the chief of his Secret Service security detail, that the journey was not secure.

The President had a very strong, a very angry response to that. The President said something to the effect of “I’m the fucking President. Take me up to the Capitol now,” to which [Engel] responded, “Sir, we have to go back to the West Wing.”

Mr. Trump then used his free hand to lunge towards Bobby Engel, and when Mr. Ornato had recounted this story to me, he had motioned towards his clavicles.

Two sources said Engel, Ornato, and the Secret Service agent who drove the vehicle eventually taking Trump from his speech at the Ellipse are willing to testify under oath to the House committee.

“We’re Going to Get Charged with Every Crime Imaginable”

Trump was not alone in his attempt to go to the Capitol. Some aides discussed him giving another speech once he was there, and some even proposed that Trump enter the House chamber where the confirmation of Biden was taking place.

The discussions fit the scheme laid out for Hutchinson by Trump’s attorney Rudy Giuliani in a conversation four days earlier, after a meeting with Chief of Staff Meadows:

He looked at me and said, “Cass, are you excited? It’s going to be a great day….We’re going to the Capitol….The President is going to be there. He’s going to look powerful.”

Giuliani told Hutchinson to speak to Meadows about the plans. When she did, Meadows said, “There’s a lot going on. Things might get real, real bad on January 6.”

Hutchinson added that she recalled hearing about the involvement of the militias Proud Boys and Oath Keepers “when Giuliani was around”.

But Meadows, who had been involved in the scheme to overturn the election, refused to intervene on the day of the attack: “He almost had a lack of reaction. I remember him saying, all right, something to the effect of ‘How much longer does the President have left in this speech?’”

She tried again to raise the alarm as the Trumpists advanced on the Capitol: “He was just kind of scrolling and typing [on his phone]. I said, “Hey, are you watching the TV, chief?” She asked if he had spoken to Trump about the threat: “He said, ‘No, he wants to be alone right now,’ still looking at his phone.”

However, White House counsel Pat Cipollone — having told Meadows three days earlier, “We need to make sure that this doesn’t happen” — said, “We’re going to get charged with every crime imaginable.” He explained that the offenses could include obstruction of justice, defrauding the election, and inciting a riot.

With the attackers inside the Capitol, Cipollone told Meadows that he had to act. The Chief of Staff “looked up and said, ‘He doesn’t want to do anything, Pat’.” The White House counsel responded:

Mark, something needs to be done or people are going to die and blood is going to be on your fucking hands. This is getting out of control. I’m going down there [in the Oval Office dining room where Trump was holed up]

When Meadows and Cipollone returned from the dining room, the counsel said, “They’re literally calling for the Vice President to be hung.” Meadows replied, “You heard him, Pat. He thinks Mike deserves it. He doesn’t think they’re doing anything wrong.”

At the same time, Trump was tweeting that Pence did not have the “courage to do what needs to be done”.

House Minority Leader Kevin McCarthy angrily called Hutchinson, having heard Trump’s call for a march on the Capitol, “Figure it out. Don’t come up here.”

The aide assured the GOP legislator that Trump would be checked. As the attackers roamed the Capitol and threatened executions, McCarthy called Trump, who responded, “These people are more upset about the election than you are.”

Despite his anger, McCarthy made a high-profile visit days later to Trump’s resort in Florida to pledge allegiance.

Throwing Food Against the Wall

Hutchinson corroborated earlier testimony that Republican legislators and activists involved in the plot sought pre-emptive pardons for potential criminal offensive, with Meadows — who asked for a pardon for himself — and Giuliani pressing the case.

But Cabinet members were so disturbed that they were discussing Trump’s removal under the 25th Amendment.

Hutchinson set her account of January 6 in the context of earlier Trump rages and tantrums. On December 1, she was summoned to the Oval Office dining room just after a published interview with Attorney General William Barr which detailed Trump’s pressure and said the Justice Department had “not seen fraud on a scale that could have effected a different outcome in the election”.

There’s ketchup dripping down the wall and there’s a shattered porcelain plate on the floor. The valet had articulated that the President was extremely angry at the Attorney General’s AP [Associated Press] interview and had thrown his lunch against the wall.

The aide explained that the episode was one of “several times throughout my tenure with the Chief of Staff that I was aware of [Trump] either throwing dishes or flipping the tablecloth to let all the contents of the table go onto the floor”.

Some Republican House representatives publicly tried to tear down Hutchinson — despite her record as a senior aide to House Minority Whip Steve Scalise, Sen. Ted Cruz, and Meadows — by insisting the testimony was “literally all hearsay evidence”.

But other GOP legislators privately said they were disturbed by the revelations. One said, in an echo of Trump’s behavior, that he wanted to throw his lunch against the wall.

Closing the hearing, Committee chairman Rep. Bennie Thompson of Mississippi praised Hutchinson’s courage. He advised Trump aides who have refused in part or in full to co-operate with the investigation, including Meadows, former Trump strategist Steve Bannon, and economic adviser Peter Navarro:

Your attempt to hide the truth from the American people will fail.

If you’ve heard this testimony today and suddenly you remember things you couldn’t previously recall or there are some details you’d like to clarify or you discovered some courage you had hidden away somewhere, our doors remain open.