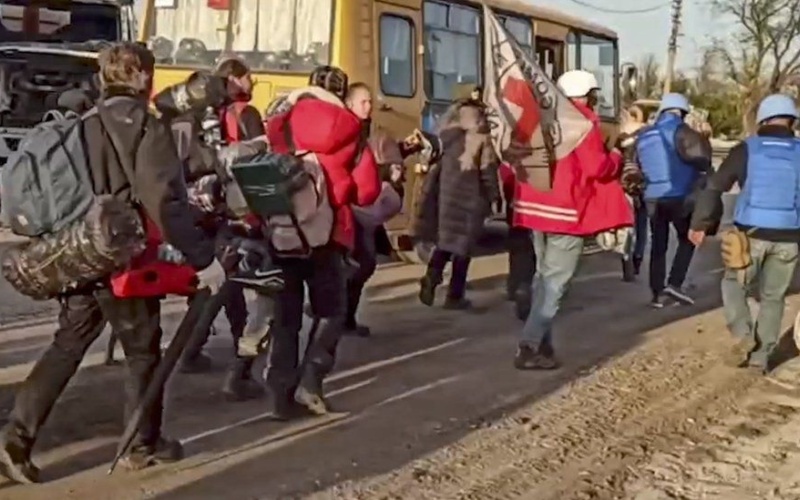 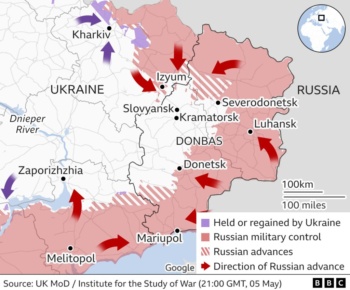 The US has imposed sanctions on three Russian TV stations and executives of Gazprombank, Russia’s largest financial institution Sberbank, and Moscow Industrial Bank and its 10 subsidiaries.

Washington also banned Americans from providing any accounting and consulting services to Russians.

A Biden Administration explained, “This is not a full block. We’re not freezing the assets of Gazprombank or prohibiting any transactions with Gazprombank. What we’re signalling is that Gazprombank is not a safe haven, and so we’re sanctioning some of their top business executives…to create a chilling effect.”

Commanders in the besieged Azovstal steel plant in Mariupol have held a press conference vowing to resist the ongoing Russian assault, following the movement of all women and children out of the complex.

The defenders said two troops were killed and six injured were killed during this week’s movement of the women and children as “the price of the evacuation of civilians”.

They juxtaposed the departure of several hundred from Azovstal, with more than 25,000 civilians in the port city had been killed: “It is joy through tears.”,/p>

Then they pledged resistance:

No one expected us to stand for so long….We are called heroes, and we should not flaunt it, because we do our job. The heroes are next to me. Many people gave their lives for the city, for the state and for the citizens of Ukraine….

We [the Azov regiment] were called a paramilitary group and radicals. Where we were radicals is in defending our country. We did great damage to the enemy. We received no help: no artillery or aircraft. We were left alone and we were alone for eight years….

We knew that the Azov Regiment had no high chance of survival. We cannot surrender and give up to the enemy. Because every POW is a resource for exchange to increase the level of political negotiations….

We are fighting for a free world here. If #Russia will crash Ukraine, and Mariupol is the main location in this war, they will go further: to Poland, to the Baltic countries.

Commanders of #Azov regiment who resists #Russia in Azovstal plant in #Mariupol tell during the press-conference via Zoom, that about 25,000 civilians have been killed in the city by Russia.
In this thread you can read the most important things they tell. pic.twitter.com/Hy25FDkTQ5

A musical appearance by Bono and The Edge of U2 inside the Kyiv metro, reworking “Stand By Me” as “Stand By Ukraine” and singing “Angel of Harlem” and “With or Without You”:

Russian forces have finally occupied a town in their offensive in eastern Ukraine, moving into Popasna after weeks of bombardment and ground assaults.

Ukrainian troops withdrew a little from Popasna because the city was under shelling for more than two months. Everything is destroyed there. That’s why Ukrainian troops retreated to stronger positions, which were prepared in advance.

In its latest operational report, Ukraine’s General Staff says Russian forces have made minor advance in their offensive in the east; however, the Russians are on the defensive near Kharkiv amid a Ukrainian counter-offensive.

The General Staff said the Russians captured the northern outskirts of the village of Shandryholove, trying to push south from Izyum into the Donetsk region.

But it added that there were few changes in the Russian positions amid “preparations for the continuation of the offensive”, including the use of artillery on Ukrainian defenses.

The report added that in the Kharkiv area, the Russians are concentrating on “preventing the further advance of our troops towards the state border of Ukraine to the north and northeast”. This included shelling of villages recently recaptured by Ukrainian forces, such as Prudyanka and Slatine, and strengthening of defensive positions.

The analysts of the Institute for the Study of War assess:

The #Ukrainian counteroffensive northeast of #Kharkiv is making significant progress and will likely advance to the #Russian border in the coming days or weeks.

With 60 sheltering civilians feared to have been slain in Russian bombing of a school in eastern Ukraine, Luhansk regional governor Serhiy Haidai has held out hope for some survivors:

An aircraft bomb went into a school. Unfortunately, it is completely destroyed….There were 60 people hiding from the shelling

Considering it was an aircraft bomb, not an artillery shell, when the explosion happened, the temperature was wild. Of course, our state service emergency workers will try to clear the debris as fast as they can, but the chances of people still being alive are small.

But we hope for the best. A bit later, when the debris is cleared, I will report on the situation. Maybe, someone will actually stay alive.

No words… 60 people killed as a result of Russian bombing a school in Bilogorivka on May 7 – officials #StopRussia #StandWithUkraine pic.twitter.com/ZXhaqcQIM7

Today is Ukraine’s Day of Remembrance and Reconciliation. President Volodymyr Zelenskiy has recorded message from Borodyanka, the town northwest of Kyiv where Russian forces carried out mass killing of civilians.

Here is the second half of the video. Zelensky says that “never again” — the promise after the Second World War to not allow fascism to return — is now just “again,” and evil has returned. He says some people have forgotten the promise. Ukraine is the frontline in the fight now. pic.twitter.com/SzSzIWzbDN

The commitment almost doubles the UK’s previous assistance. It comes before Sunday’s meeting of G7 leaders in a video call with Ukraine President Volodymyr Zelenskiy.

Russian bombing of a school in eastern Ukraine has killed two people, with fears that 60 under the debris have been slain.

Luhasnk regional governor Serhiy Haidai said about 90 people were sheltering in the school in the village of Bilohorivka when it was hit on Saturday afternoon, setting the building ablaze. Thirty people were rescued.

The fire was extinguished after nearly four hours, then the rubble was cleared, and, unfortunately, the bodies of two people were found. Sixty people were likely to have died under the rubble of buildings.

🇺🇦 MFA strongly condemns #Russian shelling of a school in Bilohorivka, sheltered 60 people, on May 7. #Russia committed this brutal war crime shortly before the Day of Remembrance and Reconciliation, constantly repeating the tragedy of World War II.#StopRussianWar pic.twitter.com/dxf3fX7GrZ

Haidai wrote on Telegram that shelling of the village of Shypilovo has destroyed a house, with 11 people trapped in the debris.

A bomb early Saturday morning, on the small village of Malotaranivka, destroying homes and a small bakery. There were no fatalities.

As she cleaned up her goddaughter’s damaged apartment, resident Tatyana Ostakhova, 38, said, “What kind of military target is this? A store that bakes bread so people don’t die of hunger?”

The Ukrainian military has sunk another Russian warship in the Black Sea, and destroyed Russian positions on occupied Snake Island.

The Ukraine Defense Ministry said a drone has sank the Russian landing craft near the island, which has become a symbol of Ukrainian resistance to the Russian invasion.

Satellite photos showed most of the buildings on Snake Island have been flattened. A landing craft appears to be damaged on the northern beach.

Serhiy Bratchuk, a spokesman for the Odesa regional military administration, said a Russian helicopter on the island and two patrol boats were destroyed, as well as the landing craft with a capacity of about 80 to 100 personnel.

The Ukrainian military posted video of a destroyed Russian Mi-28H helicopter, and claimed drones had also been eliminated.

The Odesa City Council said four missiles hit a furniture company, with shock waves and debris damaging high-rise apartment buildings. The other two missiles struck the Odesa airport, whose runway was already out of operation because of an earlier missile attack.

A curfew is in place until Tuesday morning.

In his late-night address to the nation, Ukraine President Volodymyr Zelenskiy spoke of Russia’s destruction of “nearly 200 cultural heritage sites”.

Officials confirmed on Saturday that Russian forces shelled and burnt a museum with the works of the 18th century philosopher and poet Hryhoriy Skovoroda in the Ukrainian village of Skovorodynivka, near Kharkiv in northeast Ukraine.

A staff member was injured as the building was set on fire. The most valuable items in the collection had been moved earlier to a safer location.

🇷🇺rocket destroyed the National Museum of 🇺🇦philosopher Hryhoriy Skovoroda near Kharkiv. This year marked 300yrs since his birth. The killing of thousands of people, destruction of language, historical memory,and culture are confirmations of genocide. russia's genocide against 🇺🇦 pic.twitter.com/oJ3nAbhOqj

ORIGINAL ENTRY: With Russia still hoping to overrun Mariupol in southern Ukraine for its “Victory Day” on Monday, the last women and children have been moved from the destroyed and besieged Azovstal steel plant.

The final group, trapped in an underground shelter for weeks, were allowed to leave on Saturday. Ukraine President Volodymyr Zelenskiy said in his nightly address to the nation that more than 300 civilians had been rescued.

I am grateful to the teams of the International Committee of the Red Cross and the United Nations Organisation, who helped us organise the first phase of the evacuation missions from Azovstal.

Zelenskiy said Ukrainian officials are now pursuing a “second stage of evacuation” to get doctors and soldiers to safety. The Government asked the international medical group Médecins Sans Frontières “to organize a mission to evacuate the defenders of Mariupol and Azovstal and provide medical care to the wounded people, whose human rights were violated by Russian Federation”.

But frustrated in attempts to claim territory elsewhere in Ukraine, Russian forces continued their shelling of Azovstal. With 700 of about 2,000 Azovstal fighters injured, the Government noted, “Now there is a lack of medicines, water and food, wounded soldiers are dying because of gangrene and sepsis.”

Olena Halushka of Ukraine’s Anti-Corruption Action Centre posted a video showing defenders and asking MSF, the UN, the Pope, and international leaders to help with their safe departure.

“Standing Until the End”

Military medic Yevgenia Tytarenko, whose medic husband is trapped inside the steel plant, has been tracking conditions. She said on Saturday, “Lots of soldiers are in serious condition in the hospital. They are injured with no medicine. Food and water are running out.”

Her husband Mykhailo texted, “I’ll be standing until the end.”

Yevgenia said, “Commanders have already said their farewells to their wives. One of them messaged his wife: ‘Don’t cry. We’ll be back home in any case — alive or dead’.”She explained that defenders had fought against the Russian onslaught while moving civilians and the dead to different parts of Azovstal.

The bodies are in plastic bags and decaying, but the fighters will not allow them to fall into the hands of Russian forces.”

Yevgenia explains, “They deserve to be evacuated — those who are alive, injured, and dead.”

Kateryna Prokopenko spoke of the last message from her husband Denys, a commander in the plant, “Holding up.”

Kateryna replied, “Hold up, we will do everything in our power to save you.”