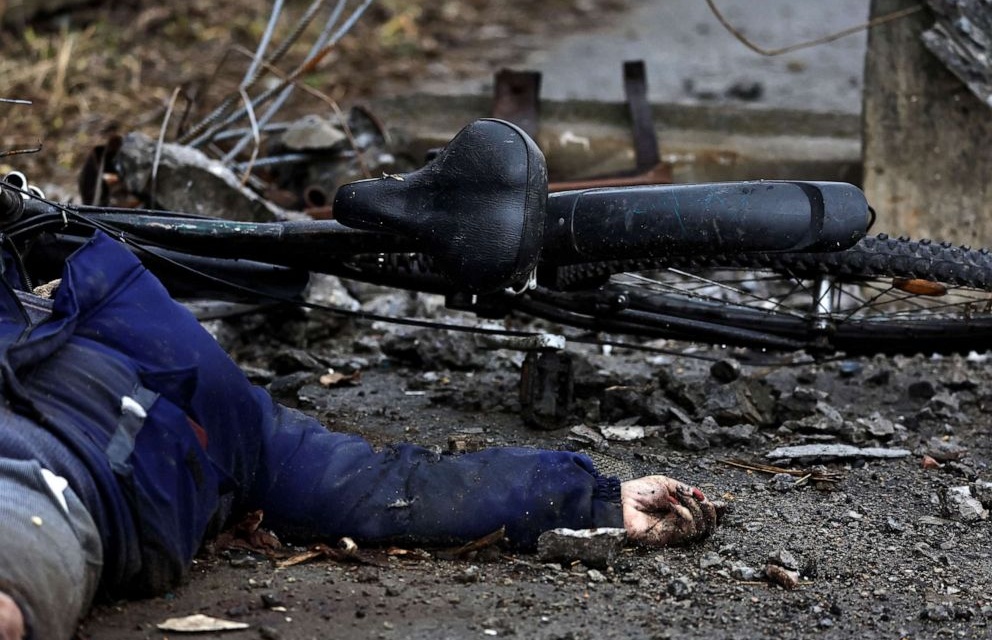 The body of Iryna Filkina, who was training to be a makeup artist, lies in Bucha, Ukraine after mass killings by Russian soldiers in March (Reuters) 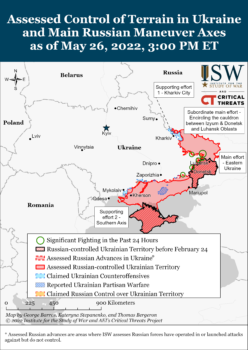 The UN has confirmed that 4,031 Ukrainian civilians have been killed, including 261 children, by Russia’s invasion. Another 4,735 civilians, including 406 children, have been injured.

Most of the casualties are from shelling and airstrikes.

The UN warns that the actual toll is far higher.

ORIGINAL ENTRY: A panel of 33 international legal scholars and experts has concluded that Russia is “responsible for direct and public incitement to commit genocide”.

Convened by the US-based New Lines Institute and Canada-based Raoul Wallenberg Centre for Human Rights, the experts conclude that in the Russian invasion, there is “a pattern of atrocities from which an inference of intent to destroy the Ukrainian national group in part can be drawn” — “the existence of a serious risk of genocide”.

The legal specialists say the Russians had broken two articles of the UN’s 1948 Genocide Convention. First they detail the incitement with the “denial of the existence of a Ukrainian identity” and the dehumanization of Ukrainians:

Russian officials and State media repeatedly invoke “denazification” as one of the main goals of the invasion and have broadly described Ukrainians as subhuman (“zombified,” “bestial,” or “subordinate”), diseased or contaminated (“scum,” “filth,” “disorder”) or existential threats and the epitome of evil (“Nazism,” “Hitler youth,” “Third Reich”). This rhetoric is used to portray a substantial segment or an entire generation of Ukrainians as Nazis and mortal enemies, rendering
them legitimate or necessary targets for destruction.

This was a “conditioning of the Russian people to commit or condone atrocities”.

One of the experts, Tanya Domi of the Columbia University School of International and Public Affairs, says, “I’ve never seen anything like this report this early during a conflict. I think the documentation of crimes in Ukraine outstrips anything that we’ve seen in the recent past.”

The International Criminal Court’s chief prosecutor Karim Khan is leading an investigation of war crimes and can bring charges of genocide. He and his team have visited sites of mass killing such as Bucha, northwest of Kyiv, where hundreds of civilians were slain — some of them executed, with hands bound their backs — by occupying Russian troops.

Vladimir Putin and his officials have denied any killings by their forces, claiming “provocation” by Ukraine, and have publicly rewarded troops who were in Bucha.

The ICC’s Khan said Russian officials are refusing to cooperate with the war crimes investigations.

The invitation is there. My door is open, and I will also keep knocking on the door of the Russian Federation.

In his nightly video address to the “unbreakable people of our brave country”, Ukraine President Volodymyr Zelensky spoke of the Russian offensive in eastern Ukraine:

The situation in Donbas, as expected, is very difficult. The occupiers are trying to achieve by day 100 of the war the goals they hoped to achieve in the first days after February 24. So they’ve concentrated in the Donbas maximum artillery, maximum reserves.

Seeking a face-saving victory after failure to overthrow the Zelenskiy Government and withdrawal from northern Ukraine, the Russian military has massed a large force in the Donbas and levelled areas with shelling.

The offensive has surrounded 2/3rds of the city of Sievierodonetsk, part of the remaining Ukrainian pocket in the Luhansk oblast. In neighboring Donetsk, the Russians occupied the city of Lyman, a railway hub for the region.

Still, the US-based Institute for the Study of War assesses that “Ukrainian defenses remain effective overall” and UK military intelligence said the Russians are struggling to provide modern units, including tanks, for an ongoing advance.