“I Had No Hope Left”: How An Ex-NATO Contractor Finally Escaped Afghanistan 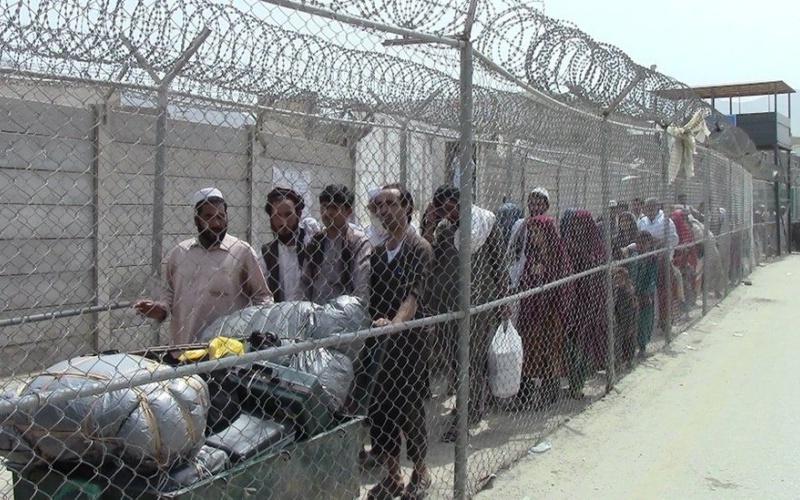 “I had a laissez-passer letter sent by NATO and was expected to board an evacuation flight on 26 August. I was in the line-up of cars on the way to the airport when explosions hit the Abbey Gate [outside Hamid Karzai International Airport in Kabul].”

When the Taliban took control of Afghanistan last summer, Moheeb had been working on security projects for NATO as part of a private Kabul-based company for the past two years.

Some of the contractors were set for evacuation. However, the bomb attacks by ISIS Kandahar (ISIS-K), an Afghanistan branch of the Islamic State group, on 26 August left many like him in limbo.

“I didn’t know if I should have felt relieved that I wasn’t at the airport for evacuation. I was completely zoned out. I was 30 minutes away from crossing the Taliban checkpoint and then there was utter chaos outside the airport,” he recalls.

Moheeb was supposed to be evacuated to Qatar and then await instructions from NATO representatives to see which country agreed to sponsor him. Some of his colleagues who got out earlier were taken to the US, Canada and Belgium.

“I had to take a step back and tried desperately to reach out to my contacts in NATO,” he explains. “After months of waiting for a response, I decided to walk across the Torkhum border to Pakistan. That was one of the hardest decisions I had to take,” he adds.

Moheeb couldn’t secure travel documents for his family since the former Afghan administration offices were shut down after the Taliban takeover.

He decided to await further instructions. But with increasing security threats and door-to-door searches for former US and NATO contractors, Moheeb was running out of time to make it out of the country. He moved his family from one relative’s house to another while waiting for a response from NATO on the next evacuation. “I sent around 15-20 e-mails and received no response. Initially some of us received an email to await further instructions but after that nothing,” he confirms.

openDemocracy has viewed the emails Moheeb sent to his contacts at NATO – at the time of this interview, all his requests were still unanswered. “I was running out of time and neither my employer nor my colleagues were receiving a response. I felt abandoned by them and all these years of working for them just felt insignificant.”

See also A Country of Starvation: Is There A Will to Save Millions in Afghanistan?

In the last week of October, after Pakistan announced the reopening of the Torkhum border crossing and the issuing of “free” online visas, Moheeb made his decision to cross.

“I decided to take matters in my own hands and set out to cross the Torkhum border and move to Pakistan,” he explains, taking a moment to express his anguish. “How can they just ignore our emails after all these years? I kept hearing news of the Taliban searching and killing former US and NATO contractors. It felt like a betrayal.”

Moheeb confirms that some of his colleagues made attempts to cross the border to Iran via Nimroz, however, many of them returned alleging violence. “The Iranian border police were deporting Afghans who managed to get across. It was clearly not an option for me as I had many witnesses confirm that the Iranian border force was using violence to disperse Afghan refugees,” he explains.

Left with just one option, Moheeb packed the minimum and took a minibus towards Torkhum. The border had been closed for civilians following the Taliban’s takeover of Kabul with exceptions for medical emergencies. Witnesses confirm that thousands of Afghans thronged the border. Families including women and children were camping without access to food and water. When Moheeb arrived in a town closer to the border, the news of swelling crowds at the borders discouraged him from making the journey. But after making a final attempt to request an update on the evacuation, he hit the road.

“I remember some of the other Afghan employees who worked with the UK government were asked to come to Torkhum and try crossing the border. I thought if I made it out as well, I might be able to secure an evacuation through other contacts. I didn’t hear from any of them once they had crossed the border. I hope the UK government was able to help them out,” he says.

“A Race Against Time to Save My Life”

The news that pedestrian crossings to Pakistan were resuming in late October added to the growing crowds attempting to leave Afghanistan. After securing an online visa for Pakistan and camping out for two days, it was time for Moheeb to try his way through the stampede-like situation near the Torkhum border crossing.

When I was camping near the border along with other Afghans, we discussed the story of the brother and sister from Nangarhar who died while trying to make this perilous journey on foot. They were denied entry by the Pakistani border police even though the woman had a medical emergency. They tried crossing the Spin Ghar mountain when they slipped and fell.

It was the most heartbreaking news as they were both from my native town. If they had waited just for two weeks, they would have been alive. But then Afghans still don’t know when they’ll see the light at the end of the tunnel.

“I had no hope left. I saw parents consoling their children who were hungry and cried through the sleepless nights in the cold conditions,” Moheeb recalls with a lump in his throat.

He waited for hours in the line until it was finally his turn to present his case to the Pakistani officer.

I had to conceal the fact that I was a NATO contractor. You never know who the Pakistan border police will deport and I couldn’t risk revealing it. I was asked why I was trying to flee and thankfully my being educated in a university abroad, helped me get across. I just said I want to get out to use my education and work in Pakistan since the Afghan economy is now doomed.

“They were some of the scariest moments of my life. My family was still living under threat in Afghanistan and here I was trying to race against time to save my life.

“Help Us and Our Families”

Moheeb’s family members haven’t been able to get passports because they are worried if they apply, the Taliban will locate them and put their lives at risk.

“The officer said nothing and just stamped my passport. The huge crowds behind me probably helped in speeding up the process. I still can’t believe it was this easy for me while thousands of families were still left in a lurch,” Moheeb says.

“Although now I don’t know how to get out of Pakistan. I’ve read in the news that the Pakistani authorities are deporting Afghan refugees. What will I do if NATO responds and the evacuation starts from Kabul?”

He fears if he receives a response and has to go back to Afghanistan, the Taliban will get hold of him during evacuations. Moheeb concludes our conversation with the hope of hearing a response to his emails.

“I hope the new year will bring with it some opportunity for Afghans at risk to start a new life. I request NATO to help us and our families.”

See also EA on Pakistan’s PTV World: The Humanitarian Crisis in Afghanistan — What Is to Be Done?
Want to Deal With Climate Change? Then You Have to Deal With Afghanistan.