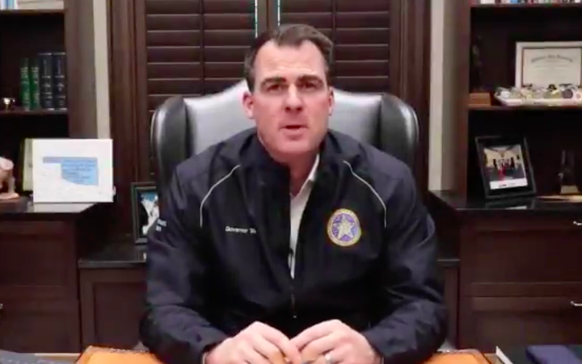 Judge Stephen Friot of the Western District of Oklahoma ruled that Defense Department regulations “leave no doubt that the department’s vaccination protocols must, and do, apply as fully to the statutory reserve components (including the Guard) as to the active-duty forces”.

However wide-ranging the command authority of the Governor and the Adjutant General may be within the four corners of their own state…it is unmistakably clear that the intent of Congress, as expressed in the text of its enactments, is that the Guard and its members will at all events be prepared, conformably to federal military standards, to be ordered into federal service, deploying alongside members of the active duty Army and Air Force, on little or no notice, anywhere in the world — which is exactly what the Oklahoma Guard and its members have done, with great distinction, on dozens of occasions.

The vaccine mandate to which the Governor objects is the one…intended to protect service members from the virus which has, in less than two years, killed more Americans than have been killed in action in all of the wars the United States has ever fought.

Friot noted that Stitt has not objected to nine other vaccines required of all service members.

Austin wrote that the Biden Administration’s lawful order that promotes “the health, safety and readiness of our military personnel, regardless of duty status”. He noted that National Guard members who are not vaccinated could be banned from “participation in drills and training conducted”, jeopardizing their service status.

A spokesman for Stitt said the governor “appreciates” the letter but “maintains his position that the governor is commander-in-chief for all members of the Oklahoma National Guard”.

Stitt’s command has compromised the position of the Oklahoma Guard’s commander, Brig. Gen. Thomas Mancino. He had to tell troops in a private town hall that he was following the orders to defy President Joe Biden’s directive for troops to be vaccinated or tested weekly.

“I did not initiate a civilian-military crisis just because I thought it was cool, right?” Mancino said. He explained that he has consulted with Guard lawyers and will carry out the vaccination requirement if he is placed under a federal order.

The commander noted that he and Defense Secretary Lloyd Austin had served together in Afghanistan, joking the former general is “a very big individual who can crush me like a bug with his hands.”

Mancino is vaccinated and encouraged his troops to do the same: “Where we differ [on the Pentagon’s directive] is my governor said it’s a personal choice on whether you do.”

Other Republican governors such as Greg Abbott of Texas and Ron DeSantis have also issued demands that the vaccine measures are not observed.

Pentagon officials said Wednesday that they can require vaccination for National Guard personnel, who may be dismissed if they defy the directive. Spokesperson John Kirby said i a statement:

e are not aware of any governor attempting to prohibit members from receiving the vaccine, and don’t see this as placing any individual member in conflict with state authorities.

Failure to receive the vaccine may jeopardize an individual member’s status in the National Guard….[Governors] may not relieve individual members of the Guard from their obligation to comply with this valid medical readiness requirement.

A Pentagon official said the Secretaries of the Army and Air Force will work with Gen. Daniel Hokanson, the head of the National Guard Bureau, with action on a “case-by-case basis”.

A “senior military official in the state” said more than five National Guard commanders in other states have contacted Oklahoma colleagues expressing interest in Stitt’s orders.

About 54% of Army Guard members, facing a June deadline, are unvaccinated. In contrast, 89% of Air National Guards members have received at least one dose before a December 12 deadline.