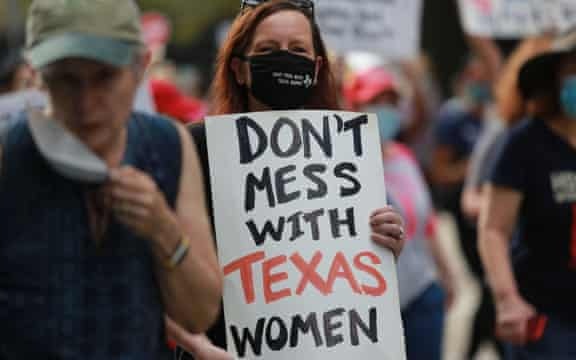 The US Supreme Court has allowed Texas’s near-ban on abortions to stand, while permitting further legal challenges to the restrictions.

The conservative-dominated Court narrowly ruled 5-4 that the law, which bars abortions beyond six to seven weeks of pregnancy, can continue.

An 8-1 ruling permits lawsuits against some state officials in federal court. However, the suits may be filed only against state licensing officials such as the executive director of the Texas Medical Board, which can take disciplinary actions against abortion providers who challenge the state’s law, SB8. The Texas Attorney General and state clerks are protected from any legal action.

Most clinics in Texas have sharply reduced services, with many women forced to travel out of state — if they can — for abortions.

Nancy Northup, the President of the Center for Reproductive Rights, said, “We will continue to seek justice in the shred of the case that the court has allowed to go forward and seek every other legal means to stop this catastrophic law.”

In partial dissents, Chief Justice John G. Roberts Jr. and the court’s three moderates — Stephen Breyer, Sonia Sotomayor, and Elena Kagan — warned that the limited permission for legal challenges may be inadequate. Sotomayor wrote that the court’s ruling can be circumvented by a minor change to SB8, which deputizes private individuals to sue anyone who performs an abortion or “aids and abets” it, to avoid review in federal court.

Roberts wrote that SB8 is an attempt to undermine the authority of the Supreme Court and the precedent of Roe v. Wade, which “has had the effect of denying the exercise of what we have held is a right protected under the federal Constitution”.

Marc Hearron, who represented the abortion providers in the Court, noted an injunction will not prevent lawsuits from private parties seeking monetary damages from clinics, doctors, and others who help women with abortions: “Make no mistake. While the court allowed our legal challenge to proceed against some state licensing officials, an injunction against those officials will not block Texas’ bounty-hunting scheme.”

The Texas case is separate from the Court’s consideration of a Mississippi law barring abortions after 15 weeks. Many observers believe a majority of the justices will rule to overturn or undermine the 1973 precedent of Roe v. Wade, which sanctioned a woman’s right to choose up to 24 weeks of pregnancy.

As expected, the US Court of Appeals for the 5th Circuit has upheld Texas’s near-complete ban on abortions.

In a 2-to-1 order, the court refused the Justice Department’s request to reinstate an earlier court ruling lifted the ban on abortion beyond six to seven weeks of pregnancy, with no exceptions for cases such as rape or incest.

A federal appeals court in Texas has temporarily reinstated the state’s law banning abortions after about six weeks of pregnancy.

In a two-page ruling, the three judges on the US Court of Appeals for the 5th Circuit — considered one of the most conservative benches in the country — granted a stay maintaining the ban as it considers an appeal by the state of Texas of the ruling of US District Court Judge Robert Pitman on Wednesday.

At least six Texas clinics resumed abortions after Pitman’s decision, but most of the state’s providers had refrained, anticipating the legal developments.

The Court of Appeals called on lawyers for the Biden administration to respond to Texas’s appeal by Tuesday.

Nancy Northup, president and chief executive of the Center for Reproductive Rights, said in a statement, “The Supreme Court needs to step in and stop this madness. It’s unconscionable that the Fifth Circuit stayed such a well-reasoned decision that allowed constitutionally protected services to return in Texas.”

ORIGINAL ENTRY, OCT 7: A federal judge blocks enforcement of a Texas law banning abortions after about six weeks of pregnancy.

In a 113-page ruling, Judge Robert Pitman accepted the objections of the Biden Administration to the Texas Senate Bill 8, which delegates enforcement to private individuals who can sue anyone who performs abortions or “aids and abets” them.

Pitman wrote, “From the moment SB 8 went into effect, women have been unlawfully prevented from exercising control over their own lives in ways that are protected by the Constitution. This court will not sanction one more day of this offensive deprivation of such an important right.”

The judge enjoined Texas or anyone acting on its behalf from enforcing the law, specifically ruling that state court judges and court clerks cannot act.

[This is] a victory for women in Texas and for the rule of law.

It is the foremost responsibility of the Department of Justice to defend the Constitution. We will continue to protect constitutional rights against all who would seek to undermine them.

But despite the ruling, Texas clinics are unlikely to restore services. The ban allows providers to be sued retroactively for any abortions they provide, even while the law is suspended by courts.

Nancy Northup, the president and chief executive of the Center for Reproductive Rights, said clinics “hope to resume full abortion services as soon as they are able, even though the threat of being sued retroactively will not be completely gone until S.B. 8 is struck down for good”.

Whole Woman’s Health, which has four Texas clinics in the state, said it is “making plans to resume abortion care up to 18 weeks as soon as possible; however, a spokeswoman said she did not know when this would happen.

Attorneys for the state of Texas notified the US Court of Appeals for the 5th Circuit — considered one of the most conservative courts in the country — that they will challenge the ruling.

The Biden Administration intervened last month after the Supreme Court declined to block the law in a 5-to-4 decision. The justices did not rule on whether the ban was constitutional, so the Justice Department filed an emergency motion requesting an order preventing enforcement while judicial proceedings continued.