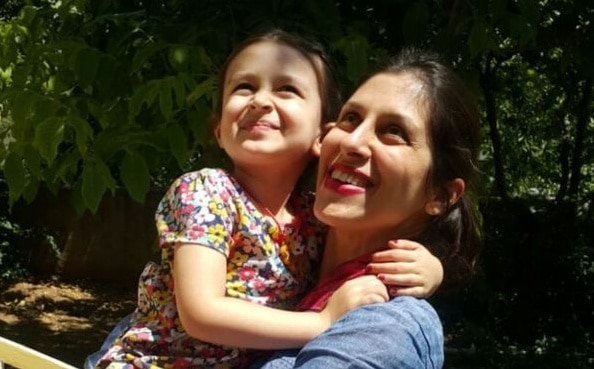 Iran’s authorities have filed a new criminal charge against former political prisoner Nazanin Zaghari-Ratcliffe to keep her in the country.

The Anglo-Iranian charity worker appeared in a Tehran Revolutionary Court on Sunday and was charged with “propaganda against the system”. Her alleged “crime” is participation in a gathering outside Iran’s Embassy in London following the 2009 disputed Presidential election and an interview which she gave to BBC Persian.

Her lawyer Hojjat Kermani said, “I am very hopeful that she will be acquitted,” but was unsure if there would be a court ruling before or after the Iranian New Year holidays on March 20.

In a phone call with Iranian President Hassan Rouhani, UK Prime Minister Boris Johnson has sought the “immediate release” of former political prisoner Nazanin Zaghari-Ratcliffe, permitting her to return to the UK.

A spokesperson summarized, “[Johnson] said that while the removal of Nazanin Zaghari-Ratcliffe’s ankle monitor was welcome, her continued confinement remains completely unacceptable and she must be allowed to return to her family in the UK.”

Rouhani’s office does not mention Johnson’s request in its summary of the call.

Richard Ratcliffe has pointed to Iran’s manipulation of the status of his wife, political prisoner Nazanin Zaghari-Ratcliffe, with a summons for a court hearing after she was “freed” on Sunday:

I think they have just closed the legal anomaly. So the ankle tag is taken off to close down the first case and avert formal steps from the UK, but she is in court again next week for the new one. So she remains leverage for them.

Ratcliffe pointed to the positive, “At least she has been able to visit her granny today, and is hoping to visit the family of one of her cellmates, and wife of one of the other British prisoners.”

ORIGINAL ENTRY, MARCH 7: Iran’s authorities have “freed” Anglo-Iranian political prisoner Nazanin Zaghari-Ratcliffe — only to threaten her with imprisonment on a new charge.

Zaghari-Ratcliffe’s five-year sentence for “espionage” expired on Sunday. However, Iranian officials refused to confirm if she would be allowed to leave the country and rejoin her husband Richard Ratcliffe and their young daughter Gabriella in the UK.

Her attorney Hojjat Kermani told the Iranian site Etemaad, “She has been freed.”

But he added, “A hearing for Zaghari’s second case has been scheduled at branch 15 of the Revolutionary Court of Tehran.”

I have been in touch with Nazanin‘s family. Some news:

1) Thankfully her ankle tag has been removed. Her first trip will be to see her grandmother.

2) Less positive – she has been summoned once again to court next Sunday.#FreeNazanin

Zaghari-Ratcliffe has been under house arrest since she was released on furlough last March amid the Coronavirus pandemic in Iran.

The Anglo-Iranian dual national, then working for the Thomson Reuters Foundation, was seized in April 2016 at Imam Khomeini International Airport in Tehran as she and Gabriella, then an infant, were leaving Iran after a visit to family.

She was sentenced to five years on the espionage charges. No evidence was publicly presented at the time.

Later, in State TV documentaries, payslips and e-mails were displayed to “prove” Zaghari-Ratcliffe sought the overthrow of the Islamic Republic. The documents were from her work for BBC Media Action, which trains journalists overseas, at the time of mass protests in Iran against the 2009 disputed Presidential election.

In September, Iranian officials threatened new charges, but a court hearing was called off at the last minute.

The UK Foreign Office told Zaghari-Ratcliffe’s lawyers in December that it has no obligation to assist the charity worker.